Dr Jim Saleam:  “I read this thoughtful commentary on the evolution of the historical symbolism of Eureka.” 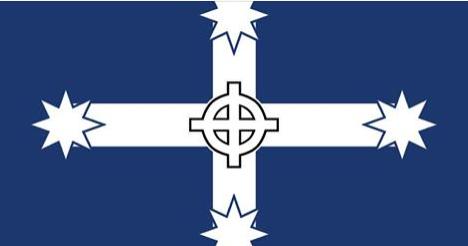 “As a nationalist, I feel moved to write a few lines on the faux “scandal” concocted by the bourgeois media over the proposed logo submitted to the AEC by the Australia First Party and the inclusion therein of the supposedly sacred Eureka Flag.

I won’t dwell on the facts of the Eureka uprising, but the description of ethnic composition, and supposed temper of the rebel corps is these days just a bludgeon forged by dishonest academics to be wielded by their capitalist masters against any worker who dares ask, “What about me?”

Furthermore, any sober student of the events of December 3, 1854 comes to the inescapable conclusion that retiring to a fixed emplacement as opposed to adopting the hit-and-run tactics of the guerrilla was the rebels’ undoing.

Moreover, the concessions wrung from the colonial authority were won through diplomacy, not acts of violence. The flag in that light is both a symbol of resistance, but also of compromise, and to the romantic it conveys the air of sorrow, loss and wasted lives; a thread which colours much of our nation’s history.

So too we can gloss over the bastardisation of the ‘Eureka myth’ and the adoption of its symbols by 20th century communists, trade unionists, and others with a social agenda to push. This is, or ought to be, well-known to nationalists. Many of us who are of a certain age were schooled in its lore in the public education system by unionised teaching staff.

The important questions we post-union era nationalists may ask might include where are we now? Who now flies the standard of Eureka and by what right do they claim that heritage? Who are the workers and what are their interests?

What is beyond doubt is that as far as we have come, we are in an era very similar to that inhabited by the semi-legendary figures of Lalor, Humffray and Ross. Large sections of the workforce both then and now can best be described as independents. The independent prospector of the 1850s took on personal risk and debt to carry out his puddling and panning on the alluvial goldfields of central Victoria; just as today the independent is in hock to start his franchise, buy his tools, and secure his means of production (to borrow a phrase from Marx).

Then as now the independent pays taxes, licence, and often interest on all the above; he forms syndicates; enters handshake-agreements; parcels work out to his mates in boom times; and relies on his mates when work is short.

To cadge another term from the historical left, we might describe the life of the independent as “Anarcho Syndicalist” in that he takes on all the risk of his own enterprises when he can afford it and thence all the profit. When he can’t bankroll a larger job himself, or lacks all the necessary skills, he forms a temporary syndicate with other workers to share both risk and profit.

Now where does the current model of trade unionism fit? It is actually no more relevant to Lalor’s world than it is to ours. Yes, the mass unionism which began in the last decades of the 19th century and which flourished was in most respects a necessity and a social good, yet it was of its time. That model fits the transitions of that era, to broad-acre farming, deep-lead mining and large-scale industrial production, but it would not have worked on the alluvial fields in the 1850s and it certainly has no place in the “Anarcho Syndicalist” 21st century. The union movement of 2016 is a mere vestige of the workers’ associations of the past. So small are it memberships, we might well avoid dealing with them at all if not for the sponsorship of disruptive, anti-national tendencies and their efforts in suppression of dissent against the globalising, neoliberal order. The worker of 2016 could be motivated by a fraternal and exclusive guild if it was in his interests; he might even be motivated to rebellion like the men of Ballarat if, like them, he stood to profit — and if syndication of common financial interests could result from his activism. What he will not cop is the universalist dogma and so-called “social justice”, the upturned noses of the bourgeois university-bred union officials and the exhortations to Give! Give! Give! from “Pork Chop” shoppies and shirkers who have never swung a hammer or lain awake at night worrying about outstanding accounts.

Eureka was not about social justice, in crude terms it was about maximising profit, there was no mass movement of oppressed workers only temporary syndication of independent small businessmen who saw some alignment of interests with the fellow on the next claim over. So who may claim the right to fly the Southern Cross? It cannot be the old, irrelevant ACTU affiliates who still pig-headedly regard the majority — the independent workers and small businessmen — as class enemies and whose officials are barely to be considered workers in any sense of the word. I would argue that the Australia First Party has more right in the matter as it embraces the small businessman and the independent worker, the cottage industry, and promotes a regime of trade protection, domestic production for domestic consumption, and a “sky’s the limit” attitude to building the common wealth of the nation.

We Nationalists are different to the bloated, moribund political parties and unions with their out of date ideas on “equality” and “social justice. We fix our eyes on the horizon; we focus on the emerging technologies and means of production — and the merging systems of networking and neighbourhood scale syndication. We as Nationalists accept that the age of mass manufacturing and agricultural production may well be over; that with technology such as digital printing, highly affordable plant and machinery, and open-source distribution of ideas and technological progress via the internet will give rise to a new era of cottage industry. Outsourcing of production to mum and dad workshops and all the other myriad distribution and logistical cogs in the wheel of the new marketplace will require a new type of workers’ movement, an “open source” movement if you will. So yes, we Nationalists have the right to fly the Southern Cross as the champions of the REAL working class majority; the independent worker; the small-time syndicalist; the Mum and Dad workshop; and the speciality producers of fine foods and luxury goods.

More broadly we embrace the free-thinker, the innovator, the open source nature of the digital age and we defend the freedoms of our age while resisting the manifold, creeping restrictions and impositions inherent in the present neoliberal order. We carry forth the true symbolism of Eureka; the resistance to the state’s attempts to compromise our independence and freedom to do business; to form syndicates; make profits on our own terms; and the slapping away of the grasping hand of “Old Privilege” as our sage Henry Lawson would have it.”