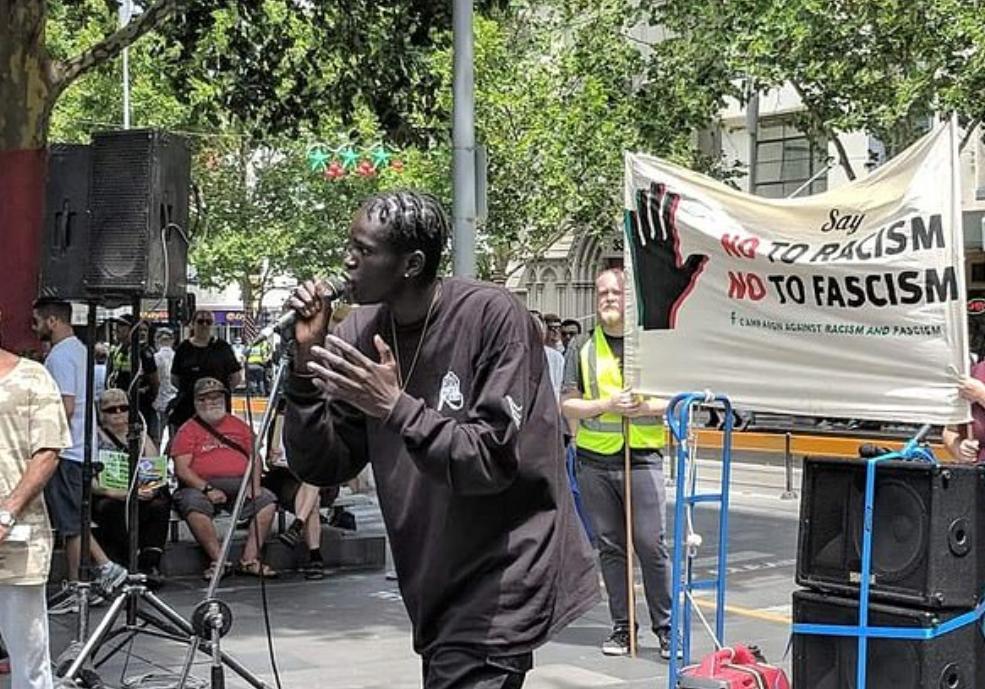 The feminazi-run State Library of Victoria last Saturday offered up its forecourt steps and lawns to the indignant melting pot of Greens-Left extremists.  Frothing in protest against the rights of Aussies down at St Kilda Beach to protest against African gang crime, the lefties were hankering to stage a counter protest to bizarrely support the crime-ridden Sudanese. 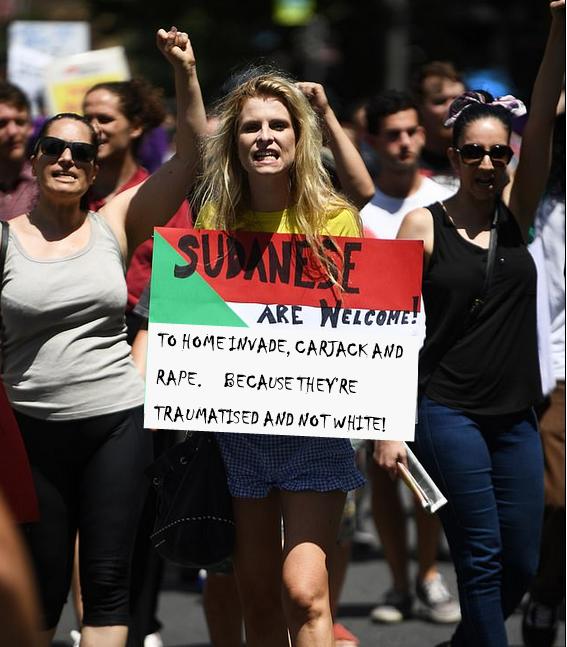 When feminazi’s are about, wise blokes just best to steer clear

The hysterical protest was a sad soul-searching estrogen response to what they reckoned was a too White testosterone rally down at St Kilda Beach’s promenade just hours before. 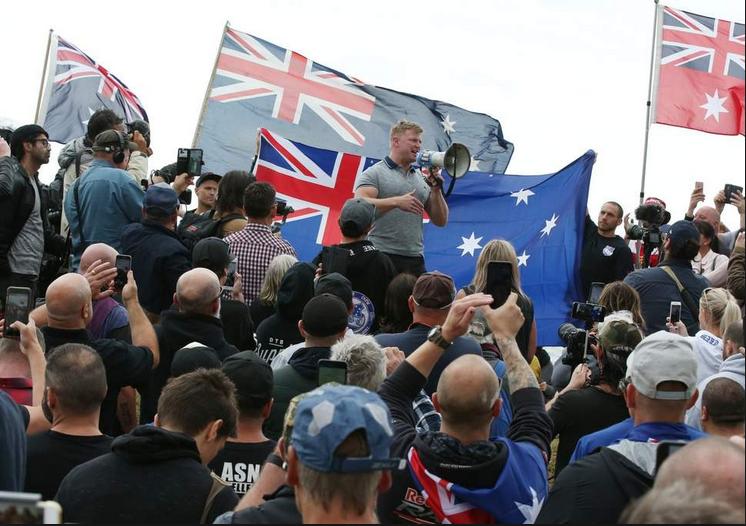 St Kilda Beach with so many Aussie blokes in one place, the Australian flags wavings, and the wiff of fish ‘n chips on the breeze?   Leftie snowflakes were starting to have diversity withdrawal symptoms. 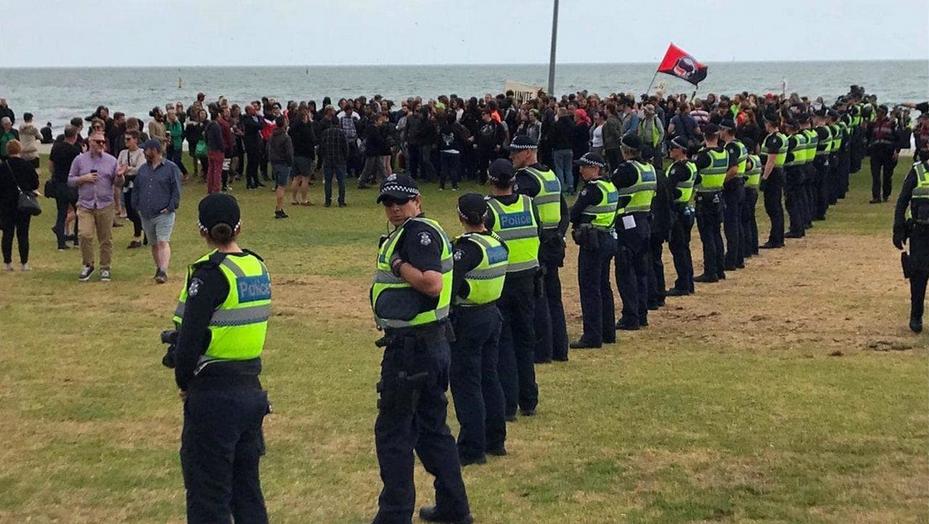 So counter-protesting dumpster lefties soon skidaddled out by train back up to Melbourne’s multiculti-ethno CBD Swanston Street and thence to rally outside their State Library haven.

Livid, the largely feminazi collective organised by the Campaign against Racism and Facism and Richmond councillor Stephen Jolly’s born-again Victorian Socialists, strumpeted their indignation outside the library. 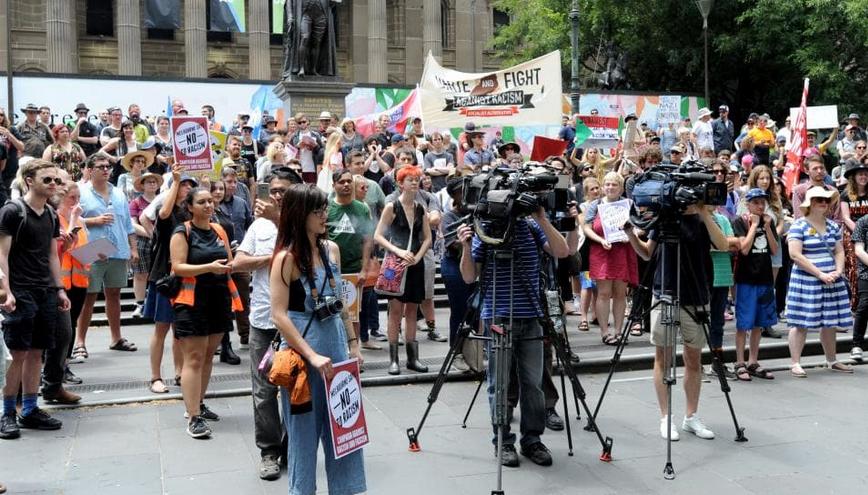 The throng waved their wobble boards emblazened in Nazi swastikas and Harold Thomas’ conjured Aboriginal flag, and screeched “Where’s Dan Andrews?”  “Where’s Apex when you need them?”  The leftie obsession with everything nazi and fascist turned into a frenzie sea of red, black and white wobble boards.

Yet genuine State Library students, researchers and readers all inside the State Library were not impressed at all.  With all the fracas immediately outside the library, no-one inside could possibly concentrate.

The State Library steps and lawn are the go to Marxist pedestal when leftists leave it too late to book the roomier more Instagram steps of Parliament House.  The Library is also leftie convenient.  It’s just across the road from the RMIT and Melbourne University’s dial-a-student protest cohort of the militant NUS Black Students.  It’s also just around the corner from lesbian Sally McManus‘s ACTU Trades Hall union plotting headquarters.  That’s where both CARF and Jolly’s socialists plot their joint activism.

A key leftie protest leader, Victorian Greens leader Samantha Shantini Ratnam (an imported Tamil) said she had received an Aussie complaint, quoted as:  “We should stop all Muslim and black African immigration before the crime level gets out of control.”

The Campaign against Racism and Facism (CARF) is UK-based and in Melbourne it’s activism is co-ordinated by Mel Gregson of former Socialist Party of Australia fame.   But Mel fled all ties back in the summer of 2016.  Comrade Anthony Main at some party became a lech beyond the pale. 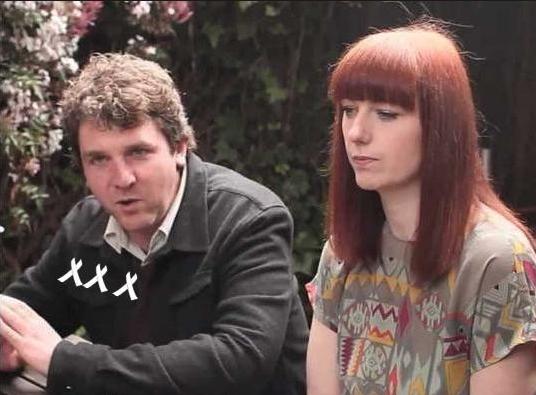 They don’t talk these days

By February 2016, Mel and thirteen of her commo committee members including IRA import Stephen Jolly had resigned in solidarity from Socialist Party of Australia.. “amid allegations of violence against women”.   Leftie Greens know squat about how to gentlemanly treat the fairer sex. Just ask Ella Buckland about Jeremy Buckingham.  While Gregson went off and set up the Melbourne chapter of UK-based CARF, the Jolly wart stuck to his knitting and set up his Victorian Socialists.

So as patriot blokes were reclaiming St Kilda Beach and casting white chips to the white seagulls, the leftie rabble was reclaiming the lawn outside the State Library rallying in support of imported African gangsters.   The library management put on a pop-up fringe fest replete with yoga, pills testing, Nepalese vegan food stalls and group kumbaya chanting. 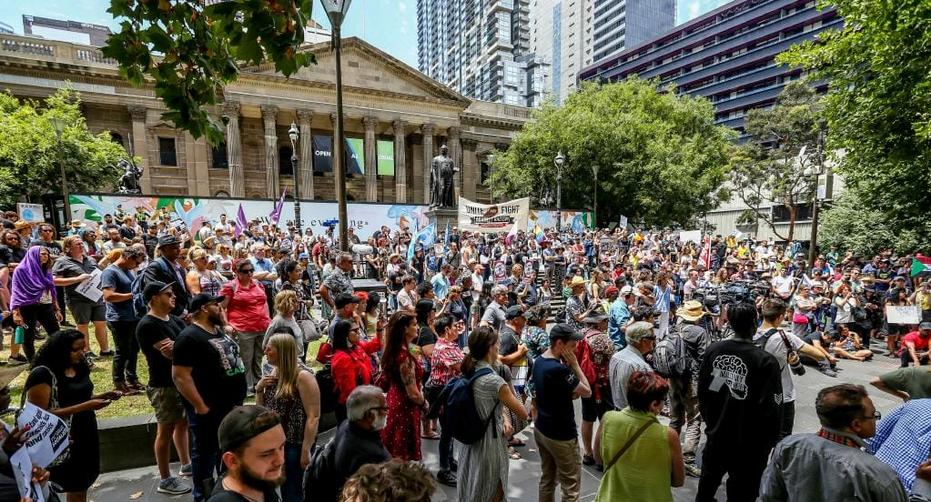 Shoosh, you lot are outside the library

State Library of Victoria boss Kate Torney was of course sympathetic to the leftie protest.   An ABC leftie journo, refugee advocate and feminazi herself, Torney is well familiar with organising feminist outrage demos across the road at RMIT.  She’s gifted $15,000 of taxpayers money so one of her mates could research a book entitled ‘Sisterhood: Feminists in the Family’.  But she’s bored and is being groomed to be back at the ABC to run it and sack all the men.