A special Sydney forum on the Syrian War, terrorism and the Syrian refugee crisis has been convened.

Venue: provided when you book. 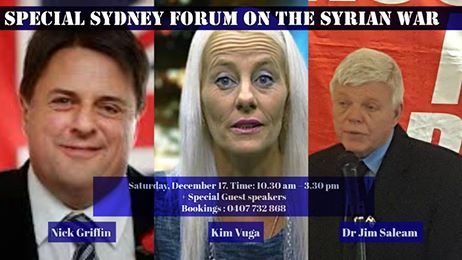 The truth about the Syrian war was let out during the American presidential campaign when Donald Trump said that “Hillary Clinton created ISIS”.

While our politicians are crying about the “dictator” President Assad in Syria killing “his own people”, about the “humanitarian disaster” and the “need for Australia to take its share of refugees”, more and more Aussies are awakening to the truth. It is our ‘Western allies’ who have sponsored terrorism to bring down Assad in order to support Israel and serve other regional allies in the lead up to a confrontation with Iran. Our allies have supported ISIS and al-Qaeda when it suited them. And as for the refugees: they may return home, says Assad, when the war ends, to rebuild their broken country. President Putin of Russia has stood on the right side of history.

President Trump has now effectively agreed to allow Russia and the Syrian government to fight to end this war.

The New World Order is bleeding on Syria’s battlefields.

Our politicians are simply lying about what this war is about and where it all leads. Our speakers will explain these things with hard facts told with energy and astuteness.

You can’t miss it!