Australia First Party candidates have said that the One Nation immigration policy is essentially ‘a scam‘, in face of reports Dick Smith will support that party in a push into Western Sydney.  [Read ‘Murdock’s Pro-Liberal Media Release’ below]

Australia First Party announced today that two of its candidates in the 2016 Federal election will re-contest in 2019 – with Jim Saleam for Lindsay and Victor Waterson for McMahon.

An announcement on Chifley will follow shortly, given an Australia First candidate, Cassie Orrock, polled in September just under 9% in a ward for Blacktown Council which is situated within Chifley.
Dr. Jim Saleam, President of Australia First Party, said today:

“Zero Net Immigration or even Zero Population Growth is no policy because the matter we see is about the ethnic survival of European Australia. Hanson has walked right away from that and Smith has never gone there.

Complaining about Muslim immigration, which Smith is queezy about anyway, when Hanson got it right in 1996 with ‘Australia is in danger of being swamped by Asians’ is no correct policy.

And if Australia is being Asianised, then the division of Sydney into three mini cities which include one based on Parramatta and one based on Penrith and resting on massive Chinese immigration, means we need a resistance to this – which neither Hanson nor Smith will provide.”

Australia First Party says that the free market economics of One Nation means that it is just Pauline Hanson’s ‘Liberal Party ‘extra‘, a safety valve for voters and community activists.

“As time goes on, it will become increasingly clear that Hansonism is a diversion from what the Australian people need. I expect as the usual Liberal suspects and ex Liberals come on board with their multiracialist so-called patriotism and free market economics people will see the choice more clearly. You may as well just vote Liberal. Taking the ‘Extra’ – that bit of blowing off steam flag patriotism – is a zero solution.”

The battle is joined.

Australia First Party has noted that Pauline Hanson developed contacts with various Liberal game-players in the Penrith area in 2015.

The opinionated patriot and former Australian of the Year has today come out as a supporter of the One Nation leader, saying he is aligned with Ms Hanson on her tough immigration stance and other policy positions. 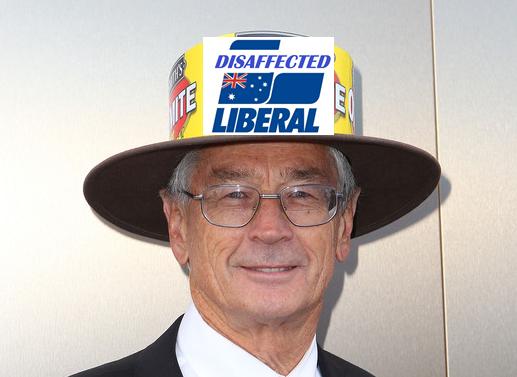 Mr Smith has offered to advise the new senator as she plans push for One Nation in key state and federal seats, and is due to meet with the first-time Senator before Christmas to formally offer his backing.

The former electronics retailer said he was drawn to work with Ms Hanson because population policy, which he says is “really important”, but Mr Smith has ruled out giving One Nation financial backing and said he will not join the party.

“I just have the plan to tell people that her population policy is right, otherwise we will destroy Australia” he said during an interview with Studio 10.

“What I’m saying is, why don’t one of the major parties take on her population policy because that would be sensible.”

The pair had an initial conversation last week, where Ms Hanson said Mr Smith “realised we agree on many things”.

“I support her policy on Julian Assange. I support her immigration policy. She says that she’s going to have a policy to help general aviation. I’ll certainly support that,” Mr Smith told the Daily Telegraph.

One Nation policies have struck a chord with Dick Smith.

The former electronics retailer ruled out financially backing One Nation, but said he would “give her some suggestions” and help secure “tens of thousands of votes”.

“Myself and the Aircraft Owners and Pilots will come up with what needs to be done and I will give her some suggestions,” he said.

“I think she would get tens of thousands of votes from the aviation community because they have been let down by the ALP and Liberals.”

He said he believes voters are “so disillusioned with our present party politics”, and that a One Nation candidates would win seats, particularly in Western Sydney, at the next state election.

One Nation is planning a major campaign in Western Sydney at the next state and federal elections. The party has similar plans in Queensland.

But One Nation has its problems as well.

In a scathing radio interview on Tuesday morning Ms Hanson declared she “cannot work with” One Nation senator Rod Culleton, and essentially announced the WA senator he had split from the party.

“We loves the limelight, he loves the publicity and he’s not really listening to the advice.”

Senator Hanson’s comments come after Senator Culleton voted against his party’s position a handful of times.

One Nation Party leader Senator Pauline Hanson thanks Mr Smith for his support.

Despite the party’s fractured state, the One Nation leader has predicted a Trump-like wave of support for the conservative alternative across the nation.

“I think there’s a move on across the country for One Nation,” Ms Hanson told the Telegraph.

The controversial senator took to Facebook this morning to thank Mr Smith for his support.

“Like many other Australians, when Dick Smith took the time to listen to what I had to say and look at my actual policies he realised we agreed on many things,” she said.

“I look forward to working with him more in the future.”

In lending his support, Mr Smith acknowledged controversy around Ms Hanson’s views on Muslim immigration and past comments around indigenous Australians.

“People tend to say that she’s racist. So I asked her, does she think that she’s superior to other races? She said no,” he said.