A fanatical religious co-ordinator recruited by a Sydney Catholic Dominican school has been caught out inappropriately preaching islam to Catholic girls – head scarf wearing, sharia, FMG, things that are “haram” (forbidden by Allah), calls to prayer, halal, and jibber from da Koran.

But don’t Dominicans preach the Christian good news and spirituality of the Gospel, not the Islamic Koran?

Santa Sabina College was established in inner west Sydney’s Strathfield in 1894 by a group of Dominican Sisters.  The college’s name is derived from Italy’s ancient Basilica of Saint Sabina which is perched on top the Aventine Hill in Rome, the ‘mother church’ of the Roman Catholic Dominican Order of friars and sisters. 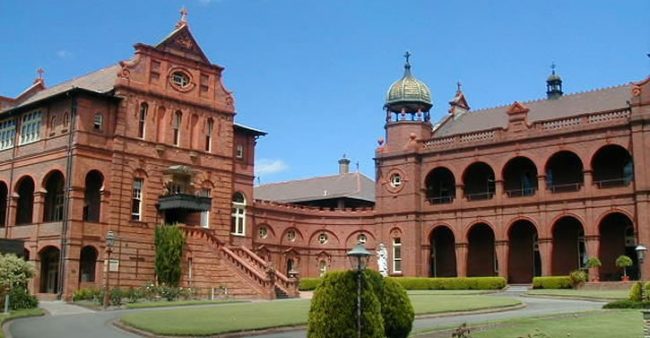 Indeed, St Dominic’s Day continues traditionally as a significant religious observance at Santa Sabina College.  The school’s junior campus includes boys until year four, but after that they boys have to bugger off.

The Santa Sabina College School Board must have gone Judas and betrayed the Catholic Church for something went amiss in 2012.

The school board recruited and approved a replacement full-blown leftard principal Dr Maree Herrett to take over control, and control she ostensibly has with a hairy iron fist.  Not a real doctor, Herrett had just scammed a PhD in gender fluidity (tranny) theory at the Sydney University of Weird Stuff.  The thesis title? ‘Gender divides: gender equity policy in Australian education 1975–2010.’ 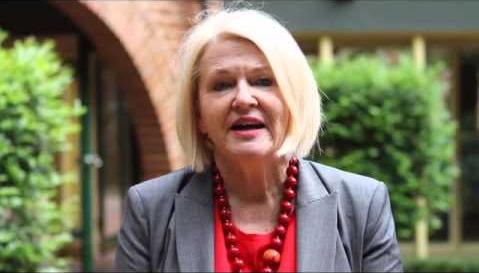 If ya can get a doctorate in gender fluidity, well, there’s a millipede curled up on my wall and I’m thinking PhD opportunity..‘Gender divides: gender equity policy for millipedes in Australian education 2075-3010.’   How could anyone in USYD “progressive” (read insular) academe reject such a dissertation? 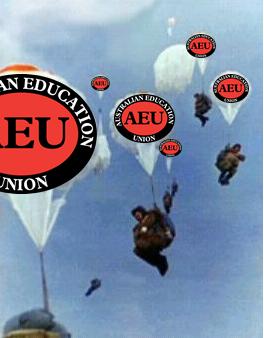 Smithy had a ball and quickly converted to Islam.  Her $20,000 junket was wholly funded by the Churchill Fellowship to “investigate the use of education as a means of addressing cultural misunderstandings of Islam in Australian society”.

Psycho Sister Smith on her first day at the Catholic girls college started with passion and enthusiasm.  She immediately pulled down all the classroom blinds, burnt the Bible, stopped the chapel bell from ringing and issued head rags to the all the girls. Any girl who questioned would cop 50 lashes with Sister Smith’s bamboo cane.

Under Smith’s cultist indoctrination, the college promoted an Islamic agenda.  Says one student,

“We were taught that we had the same God as the Islamic God, that Christians are the ones persecuting Muslims, that Jesus ‘was a refugee’ and thus we should have free and open borders, and that Islam was peace and essentially, truth.  She … promoted Islam, gay-marriage and was pro-Hillary Clinton despite her support of abortion.”

Was Herrett’s appointment of Helen Smith, independently as strangers or was there a pre-existing association and so and undeclared bias to be perceived?

Herrett has banned the traditional girls kilt skirts because it is haram and instead the covering of legs with long trousers.  Herrett suggested that girls who are also thinking about gender fluidity might appreciate the choice.  She has prescribed her deviant theory book for the Year 12 HSC English curriculum, ‘Gender Reckonings, a social science text examining, among other themes, gender relations, gender fluidity, and equality.’

In it, Herrett promotes and endorsed da latest pot-inspired deviant constructs like polyamory (multiple partners like in Islam), demisexuality and disputes the concept of binary model of marriage – that is normal marriage between a man and a woman as instituted by God.

Despite Herrett claiming her deviant ideology is “new”, Dymocks won’t stock the book because it is considered perverted cult speech. 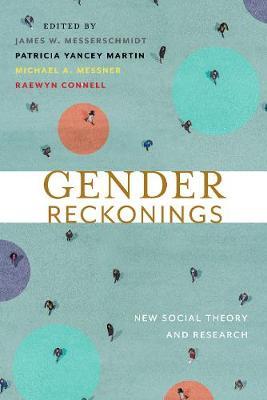 Guess who the editor is?  Her gender fluid PhD supervisor at Sydney Uni of course.

Meanwhile, the father of a former Year 7 student at the Catholic girls school has told the media that his 12-year-old daughter was forced to leave last year because he questioned the school’s teaching of Islam.   He explained to Principal Herrett that he and his wife chose to send their daughters to all-girls Santa Sabina College because of its traditional Catholic Dominican education and teaching of Gospel values.  The father in his letter to the school board, asked:

“Must we remind you that teaching children about gender fluidity is against our religion, against evolution and against the teachings of Christ.” 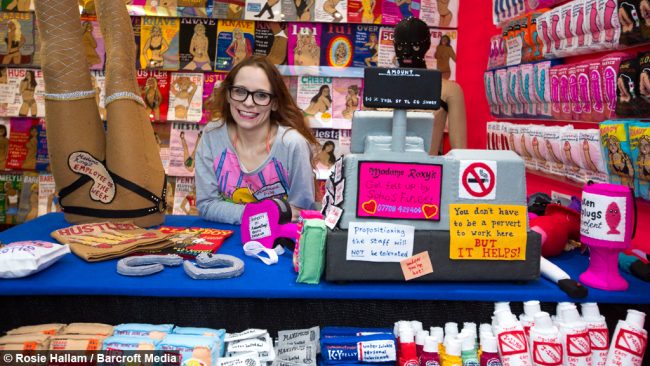 Herrett thinks the school belongs to her.  Catholic parents at the school are not surprisingly are raging.  They are fearful that this leftard principal is “trying to brainwash” their daughters in Islamo-deviance.  Talk about the college drifting from its Roman Catholic heritage.

Associate Pastor of Cornerstone Presbyterian Church in Strathfield observes of all this in The Spectator, March 23 ‘Santa Sabina school’s “religious revolution‘:

“It appears to be driven by an explicit anti-Christian and revolutionary ideology…ultimately, the real victims here are the many Maronite parents and students who, in good faith, sent their children to Santa Sabina so as to be educated in the Roman Catholic tradition. Now they are the ones who are going to be persecuted and as such will, incredibly, themselves become the “religious refugees”.

Psycho Helen Smith has not surprisingly suddenly disappeared since all the Catholic school parents complained to the school.  Perportedly she remains on an Islamist watch list with concerns she is likely to re-birth in another school somewhere to instill unwanted Islam on innocent Australian students.

The parent meeting with headstrong leftard principal was reportedly acrimonious, resulting in Herr Herrett immediately expelling the outspoken daughter from the school for being a heretic to Herrett’s Islamo-devient indoctrination.

After all Herrett’s readings of the Dominican Order was of Medieval Pope Gregory IX of 13th Century Rome and his Inquisition and she likens herself to Robert le Bougre, one of the Order’s so-called ‘God’s Dogs’.

“Heretics will not be tolerated. Orthodoxy must be preserved, whatever the price.  Peace, Shalom, Salaam.”

If you’re a good Catholic but happy to send your kids to be indoctrinated in oppressive islamic sharia teachings and gender fluidity, then Sydney’s Santa Sabina College offers a fast track pathway to barbaric paradise.  Have the Judas Cradles arrived in the college dungeons yet?

Located on The Boulevarde in Sydney’s ethnic Strathfield annual indocrination fees start at just $18,000 per annum.

Parents also complained that two “gender fluid books” in the junior school library were sent home with a five-year-old student — ‘Heather Has Two Mummies and Morris Micklewhite and the Tangerine Dress.’ 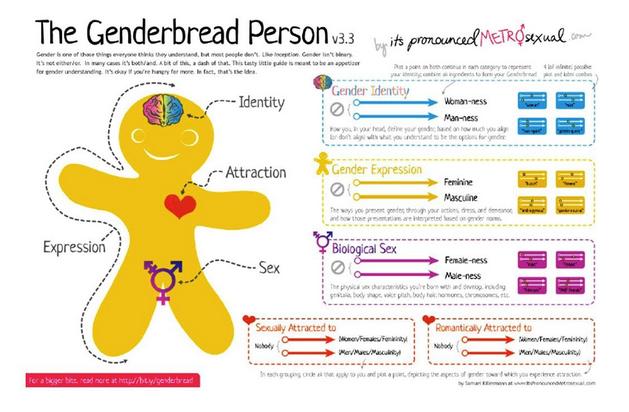 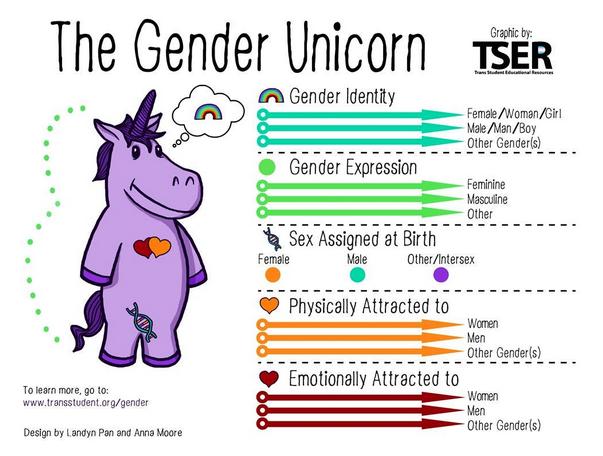 Catholic parents of daughters attending the college have demanded Dr Herrett’s resignation.  They consider it wrong that the political and ideological agendas and indoctrination (Islamism, sexual deviance and cultural Marxism) by teachers be allowed to skew their daughters’ education at this Catholic registered Santa Sabina College for girls.  They consider it a flagrant breach of faith by school principal Dr Maree Herrett.

Catholic parents have consequently threatened to withdraw as many as 200 of their daughters from Santa Sabina College and are currently exploring options to enroll them safely at decent, veritable and accessible Catholic schools.

But secret school board has gone all inquisitorial threatening its has outsourced a contemporary Robert le Bougre, one whose namesake was infamous for having 180 individuals burned at the stake in one day.

Fortunately, the school girls are a wake up and have more egalitarian Aussie ideas. 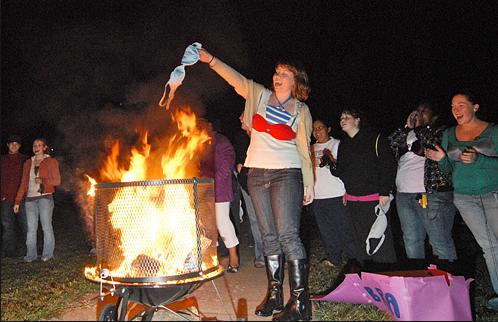