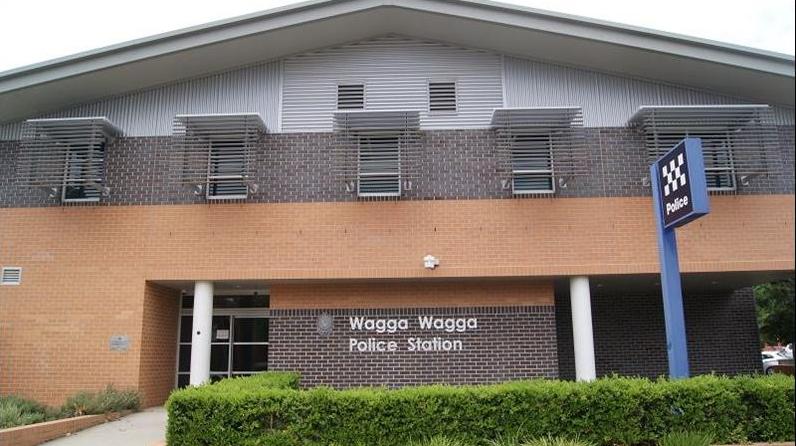 A complex?  That’s not security.

An interesting correspondence has developed between Australia First Party and Superintendent Bob Noble, commander of the Riverina Police District based in Wagga Wagga, in the wake of the fall of Liberal Party MP, Daryl Maguire and the charging of a young police officer with some offences.

We publish verbatim from our Cootamundra Campaign Facebook page as follows:

Our contributor:  “Interesting developments as Maguire’s clique scramble and run for cover? Throwing junior officers under the bus won’t change a thing. The volume of local rank and file police fronting court lately is a reflection of the chaos at the top in the Riverina Police District.

Is there truth in local rumours – young police officers are built up, exploited and then discarded, used as weapons in the local political policing directive?

A few low-level scalps (fall guys) won’t appease the victims of this local selective policing model. It’s gone way beyond that. As far as the Daily Advertiser introducing the young police officer’s football career, (that has zero to do with the criminal allegations)- so typical of the Daily Advertisers tabloid trash.  No surprises there.

Time locals stepped through the Matrix and demand the dumping of the entire Riverina political puppet show and the local Gentry behind the scenes pulling the strings.  Vote 1 Dr Jim Saleam for Cootamundra in 2019.” 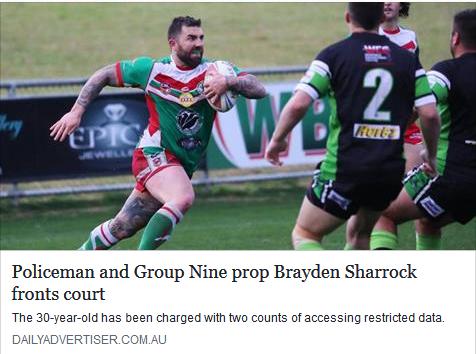 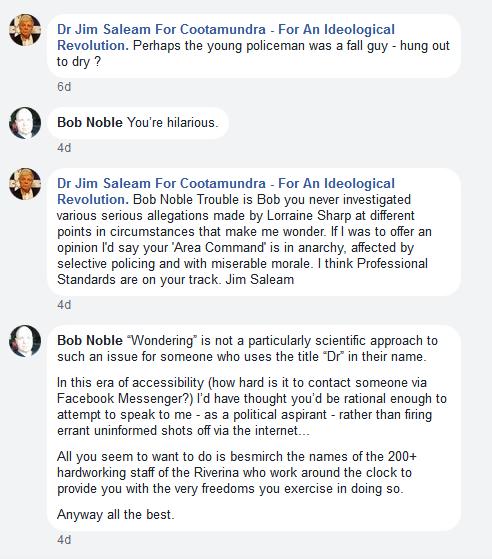 “I note that you have criticised me and otherwise corresponded with me on Australia First’s Facebook page.

I do not denigrate in any way all the police officers of your Command, anymore than John Hatton did of all police – when he won a Royal Commission into the New South Wales Police Service in the 1990s. His target was always corruption and improper policing. The exposure and removal of a few hundred criminals and the reform of policing in this State was met with the approbation of the 14,000 other police. I would say that if I ‘target’ anyone at all, it is a handful of persons and then, the politicisation of policing within your Command.

1. Why was the General Manager of Wagga City Council allowed to get away with assault at the airport in 2016 – although caught on film? Why was Detective Burton called off that case?

2. Why was a Riverina farmer Darren Ciavarella, who has been defrauded of millions of dollars by a loan company and lawyers, turned away from Wagga Wagga and Griffith Police and denied his right to even report the crime let alone cause any investigation of it (albeit he is armed with evidence of the crimes against him now held by the Law Society to be more than serious)?

Further to this, Mr Ciavarella also had the door slammed in his face by Nationals Deputy PM Michael McCormack who told Mr Ciavarella he would not assist him.

3. Is that why no Police action was carried out? Because it is politically inopportune?

However at an AVO application brought by the fraudsters at Leeton Local Court Magistrate Pearce noted the very concerning evidence in relation to the major fraud.

4. Why did this not encourage Police to open a case? Or even refer it to other professional units?

5. What has ever been done about the improper meetings at the Victoria Hotel in Wagga Wagga between a few police and young drug affected women from 2015 ff? Why was a female police Inspector Cullen able to fob off a claim of sexual assault by one of those police who would meet at that hotel with the alleged comment: “One mistake doesn’t make him a bad person” Are you aware of this?

6. Given the Eldridge case, some people may suggest that charges for assault brought against a local political ‘outsider’ identity – Councillor Paul Funnell – are selective. Would you agree that is how it could be seen?

Malay War Veteran Mr Leon Gregor was found dead at home in an isolated Riverina town in June 2017. This was sudden and unexpected. No autopsy was performed. There were other anomalies in this matter. At the time, Mr Gregor was working on exposes of the local political underworld. Indeed, it was Mr Gregor who broke the case of Daryl Maquire with his connection to the Wagga Chinese Trade Centre affair of 2012 – 2013 and the Council’s involvement in it all. He had identified Maguire’s G8way International which may now be the subject of ICAC investigation. Our files were stolen from his home (which was reported, but no action).

I could say more but these matters are better raised with the appropriate Commission. People say to me regularly that Wagga Wagga is affected by rampant drug crime and domestic violence and sundry crime. Police have said to us they feel paralysed and that their efforts are useless. These are your officers and I think they deserve more.

Yes, I do have a doctorate and yes, I do my research. It was my research that established one of the black-hats from the 1990s period (and before) had been stealing from the Special Branch Informants’ Fund and I was able to discuss that with Royal Commission police investigators. They pinned that on him. I work on the principle: ‘dig and ye shall find’.

I think that Riverina police has a fulsome and dangerous job on hand to address crime in the Command. Those police have my full support.

As a candidate for Cootamundra in 2019, I will reiterate that at every turn.” 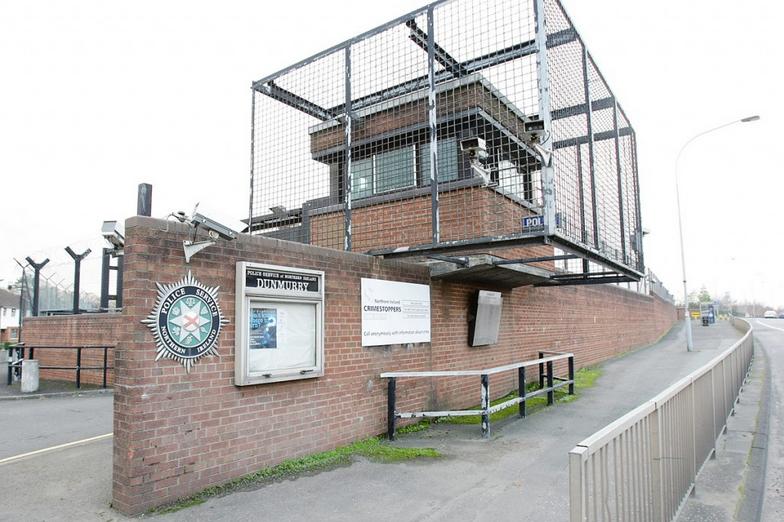