“A couple of weeks back, notorious sci-fi falafel fiction writer John Birmingham, alias Bulls#@t Birmingham, twot about me while a candidate in the Longman by-election in July 2018.

Non-fictioning history that could have landed him a job with the Peking People’s Daily in times gone by, he fibbed another one of his drug induced stories. 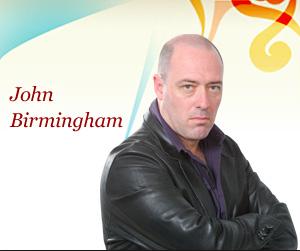 Bulls#@t said that back in 1990 he wrote an article for Rolling Stone about me and National Action, the organisation of which I was then chairman. He implied I was rather upset by his tone and I turned up at its offices looking for him and in company no less with the notorious Ross ‘Skull’ May. Was it his suggestion that I was going to cause him a bit of ultra-violence?

It is a sad fact for Bulls#@t that I never went anywhere near Rolling Stone, or any other office, looking for him ever – and therefore logically, not in the company of ‘Skull’ May either.

The funny thing was that I had never heard this story at any point from anyone in the last twenty-eight years!  Don’t tell me, I missed it!

Or was it the case that Bulls#@t’s famed capacity for drug-taking had returned and this ‘truth’ appeared in a puff of cannabis smoke?

Still, the new truth expanded! A woman (probably known to him) Penny Cooke intervened online, saying she had interviewed me once (she did: July 1984) and that I had made a threat to her along the line that I knew where she lived and so forth. I had never heard this story in thirty-four years either and it certainly was not the subject of a police report at the time.

Were these two at it together? Is this the new thing? Stories conjured decades after facts?

I was set to ignore old Bulls#@t when I noted he had jumped into ‘the Blair Cottrell on Sky News affair’. Since Mr. Cottrell appeared on Sky a few days ago, China collaborator Craig Emerson bailed out of Sky management and some advertisers pulled the plug. 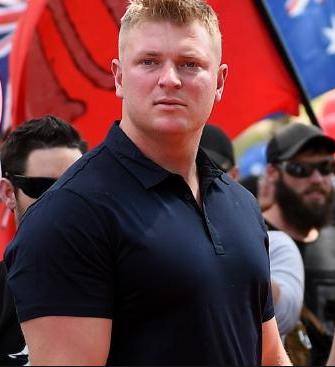 Then Bulls#@t had this to say in the Fairfax Sydney Morning Herald:

“Nazis, lunatics and obvious bullshitters didn’t used to get invited onto national news programs to discuss their take on the events of the day. Once upon a time, the only thing Nazis got from us was a bullet. Lunatics got treatment, and bullshitters were laughed off stage.”

Indeed: bullshitters shouldn’t be national stars and they should be laughed off stage! The only question is: whom does that label best fit? Further in the current climate, I interpret the remarks “a bullet” and “Nazis” as an incitement to criminal violence indulged in a major publication.

Of course, old Bulls#@t would say I am a paranoid chappy because I draw a conspiratorial picture of some things. He can then scoff it all away. On the contrary, I regard the “a bullet” and “Nazis” remarks as sinister and worthy of police investigation.

My readers may appreciate that trying to intimidate Bulls#@t would never have been on the agenda back then. National Action had been told a story about him that we acted upon. I can tell readers that we had a confidential source who had code-named himself ‘Gas Man’ and who for about two years provided us with confidential and useful intelligence on the ASIO / Special Branch operation put in place to shut down National Action and falsely imprison many of our comrades.

Gas Man was clearly someone on the inside.  Gas Man said that Bulls#@t had been in the bureaucracy that serviced the army where he had met ASIO and assisted them in some way and that he had had contact of late with a certain ‘racism expert’ (and ex psychiatric inmate!) David Greason. Gas Man had already told us Greason had secretly worked for Fairfax in 1988-89.

Further, Gas Man said Greason had designed some Fairfax smears of National Action (usually in the Sydney Morning Herald) and was consulted by Special Branch regarding the suppression op.

He suggested – and we concluded – that this media propaganda was crafted to provide a cover for any Special Branch crime committed against us; if we were continually labelled “extremists” and “racists”, then any allegations against Special Branch would be disregarded by the public, possible allies and other media not in the loop. Gas Man said that Bulls#@t had also talked to the Special Branch. Our conclusion was that the Rolling Stone article was more of the same and it was essentially ignored. Whatever old Bulls#@t might now say the truth was, that is what we thought in 1990.

I now make the point that media had played a role in the National Action suppression op. I have said for years that the Fairfax stable played not only a role in that, but in many other ‘dirty tricks’ games played against all sorts of pro Australian and patriotic organisations.

For the current purpose, the Sydney Morning Herald has allowed the term “Nazis” to be used instead of extremists and racists. The game would be in 2018, that anti fascist elements (sic), Antifa and its allies, are justified in using “a bullet” against one of the “Nazis”. This is dangerous politics. The smear is another link in our argument that there is a covert link between some establishment organs and Antifa.

I note too that historically Fairfax also liked to establish the ‘credibility’ of its own bullshitters, often promoting them in various ways, to stardom.

In the Cottrell-threat article, the Sydney Morning Herald described Birmingham as:

“John Birmingham is a columnist and blogger for the Brisbane Times. He is also an award-winning magazine writer and the author of Leviathan, the Unauthorised Biography of Sydney, which won the National Award for Non-Fiction.”

Sadly too, I recall some seventeen or so years ago, I intervened on his ‘non fiction’ Leviathan. I am sure Bulls#@t has not forgotten. I had read the hard cover edition and contacted the publishers prior to the soft-cover edition. Whole sections were struck out. For the first time, I would advise old Bulls#@t that much of the material (or my version of it) that was struck out was used in an application in the New South Wales Supreme Court as part of the evidence. A judge upheld much of what I said – but that entire story is truly for another day. So, let’s just say that I am establishing my bona fides to pass comment upon Bulls#@t ‘s writing and his intentions.

My opinion is that Bulls#@t cannot be considered as either an objective historian or an objective journalist. Reasonably, he has no love of me, but now he writes in such a way to normalise the idea that some fellow should be killed because he has an opinion that people who agree with Bulls#@t , don’t like.

The latest “a bullet” and “Nazis” piece is a part of a dirty media war that justifies crime and violence. Perhaps someone should complain to the Press Council and see if that paper-tiger is willing to do the right thing?