Last Sunday, June 25 2017 at the Melbourne Cricket Ground in the AFL Round 14, Richmond were playing Carlton when Bachar Houli (a Leb), caught holding the ball, threw a deliberate clenched fist to the head of Carlton’s Jed Lamb (an Aussie) causing Lamb to instantly collapse on the playing field concussed. Jed Lamb was knocked out cold. 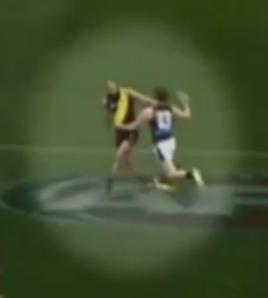 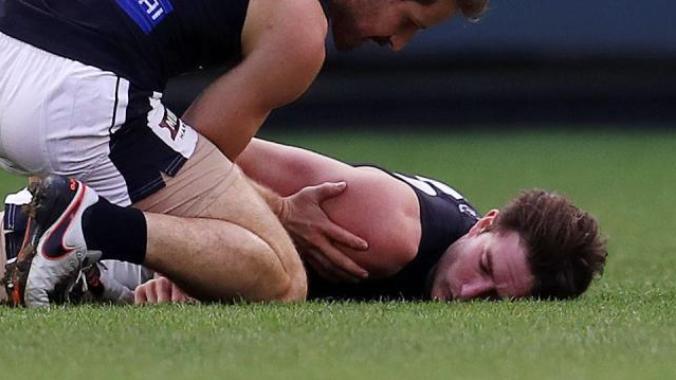 It was a despicable act of unprovoked violent assault.  The incident was captured on television.

Jed Lamb did not deserve this.  If there was recognition of the damage caused to Lamb and the potential damage that could have been caused to him (one-punch knockout blows have had far graver consequences), or of the message to other players of the consequence of their actions on the field then it was not manifest in this decision.

It has been well established now by the Boston School of Medicine researchers into sports players who get concussed that they have a considerably greater propensity to develop early dementia.  ‘Sport urged to confront head injuries that can lead to dementia‘ (2014)

Jed Lamb should sue Bachar Houli and the AFL for millions.  The Australian Football League should ban Bachar Houli from the game and from Australia sport for life to send a clear message.

Houli was found guilty in front of the AFL Tribunal on Monday of deliberately hitting Jed Lamb and knocking him out with a blow that struck him in the head. It was intentional, it was high impact and it was to the head.  This is about as serious a charge as the tribunal gets.

The Islamic thug was about to cop a paltry four week suspension slap on the writs, until two influential politicians stepped in to pervert the course of justice by siding with their fellow muzzie. On the identical charge St Kilda’s Barry Hall in 2008 copped a seven match suspension.for punching West Coast Eagles defender Brent Staker.

At the AFL, ideological minorities can do no wrong.

A character reference from Islamic agitator Waleed Aly (host of TV Channel 10’s The Project) and even more bizarrely from Prime Minister Malcolm Turnbull have each swayed the AFL judges to discount Bachar Houli’s suspension by two games/weeks.  The conned/bullied AFL Tribunal judges easily swayed are Hamish McIntosh, David Neitz and Wayne Henwood, who in their leftist PC delivery stated “it is rare to come across someone of such character.”

Why should any character reference excuse a proven hateful assault?

“Perhaps it was Dr Waleed Aly’s spirited defence of Houli that turned their heads. For certain Aly’s was the only doctor’s advice the AFL tribunal was convinced by on Tuesday evening.” Touch one touch all, eh Waleed?

What a thug who punches another player our of spite?  Bachar Houli is an Islamic, hateful of Australians.  Why Richmond recruited him can only be for muzzie PC reasons, since AFL’s show pony Simon Lethlean and his National Inclusion Carnival last year to attract muzzie cash.

Each disgracefully abandoned normal thinking and have ignored the victim and sided with the thug with political influence. Were they leaned on (bribed) by AFL sponsors Islamic Etihad Airways and the latest 1.2 billion deal?

The AFL needs to wake up to itself with that PC culturally, sensitive minority-appeasing crap distracting the sport.  The AFL is wrong to have provided prayer rooms adjoining change areas to encourage more Muslim players to the game.  Foreign ethnics need to fit into Australian culture including our sporting codes and standards of fair play.  If ethnics don’t like it, they can bugger off!

The Islamic Saudi soccer team is typical of the backward muzzie standard when before play in Adelaide on June 7 they all refused to respect the minute silence to honour of the London terror victims.

This is Australia and it’s not for Australians to accommodate the world’s incompatible cultural differences.

As Larry Pickering has observed, the AFL has refused a written request from the local mosque to provide AK47s after losing matches and is still considering Eddie McGuire’s objection to IEDs being allowed to Richmond team members when playing Collingwood. 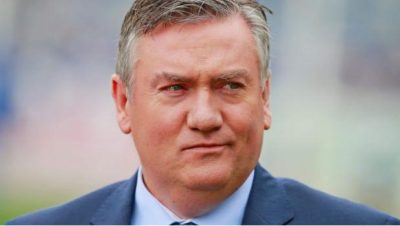 Meanwhile, Malcolm Turnbull has again demonstrated his desperate desire to be liked – courting the muzzie vote in Melbourne pretending he knows what a football looks like, as if he isn’t already the most hated politician in the same cell as Rudd and Gillard.

A transcript of a speech given by the PM at a function at Punt Road on Monday was read to the tribunal.  Turnbull said of Houli “it’s hard to find a greater ambassador for the game.” 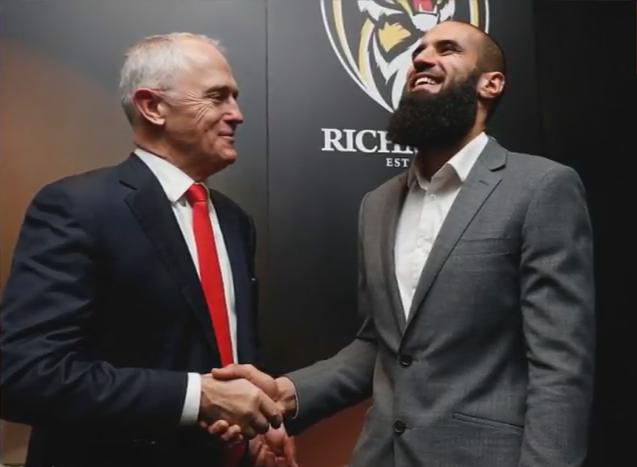 Is the Turnbullcrap going to provide a muzzie character reference to Islamic Joseph Esmaili – da muzzie hateful who punched heart surgeon Mr Patrick Pritzwald-Stegmann in the head at Melbourne’s Box Hill hospital?  The muzzie was smoking illegally at the hospital so the doc asked him to put the fag out.  So the Islamic went islamic and stabbed Patrick 14 times.

Bachar Houli (29) a devout Muslim, is an ex-Bomber from ethnic Spotswood anyway. In his notorious anti-Australian hateful disclosure in 2007 he confessed he was a practicing Muslim first, an Aussie second and Richmond player third. His Brownlow hopes are through, for life, especially bringing out that magic carpet to do his prayers to Mecca mid-game. 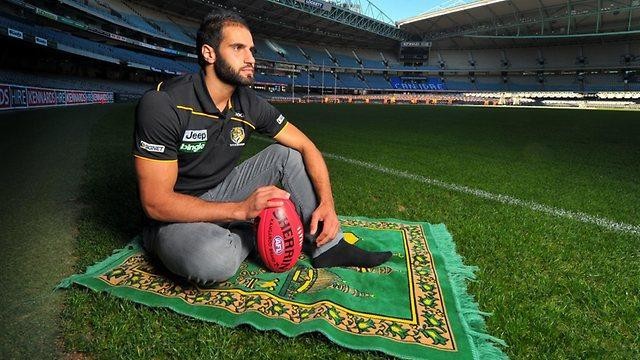 Security Blanket?   No Room for Islam in Aussie Culture 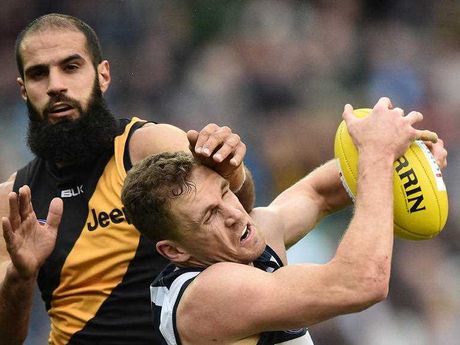 Like his going for the head against Joel Selwood of the Geelong Cats contest during the 2016 Round 21 footy match, and in 2014 Bachar Houli got stuck into Rhys Palmer of GWS in 2014, copping a penalty fine. Seems Tiger thug Bachar Houli is a serial offender going for the head of opposition players. How many times has he been back to the violent Lebanon to pick up hateful behaviour? By age 7, his daughter will be forced to wear the nijab, cop evil FGM, then segregation, forced marriage, etc.

What chance does she have?  She already looks fearful.

Muslims should not be allowed to come here and play Aussie sport if they can’t respect our values and standards of fair play. Since when did Lebs not walk around with attitude?  Where’s ya Allah index finger Houli?

Da Lebanon is your calling, Leb.