Politically correct and tiptoeing Victoria Police command and their leftist boss Premier Daniel Andrews are as useless as lips on a chicken, turkey in the straw.

As if Melbourne hasn’t got enough of that ‘Diversity-Inspired Crime‘ wiv dem Negroid Apex Gang lot running riot.  New Zealand’s PM John Key is exporting us his black slime mould instead of chucking them in Auckland’s Mt Eden zoo prison and throwing away the key. 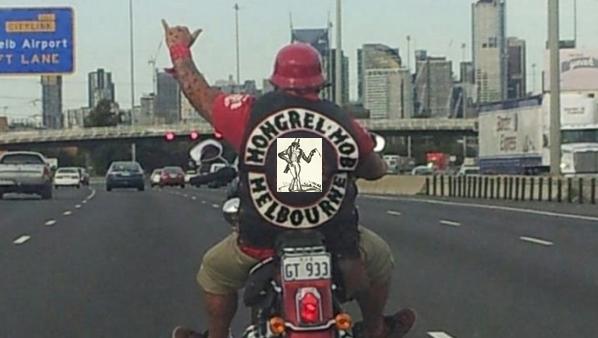 Blind and castrated states like Victoria and Queensland refuse to address gang crime and ethnic crime, so it is about time Australia at a national level overrules the states and inaugurate a national Crime Act that for one thing outlaws criminal gangs.   As if the Adelaide Finks aren’t a social costly problem enough, but Australia has let in all sorts of foreign criminal gangs – the Rebels, Bandidos, Comancheros, Hells Angels, Notorious, Gypsie Jokers and Mongols – all from mainly the US.

Late in 2012 two Mongrel Mob gang members were jailed by a New Zealand District Court after being found guilty of pack raping a 21-year-old woman in 2010.

It has nothing to do with motorbike fraternity and everything to do with organised crime.  Both gangs identify as similar to outlaw motorcycle gangs, with members who wear jackets with three-piece patches but are not required to ride motorbikes.  They are more likely to drive Audis financed from their ill-gotten gains.

The gangs have fought countless battles in New Zealand, raising fears that an increased push into Melbourne could result in bloodshed. 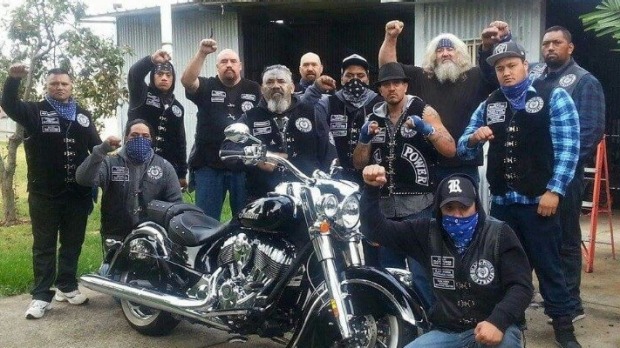 June 1, 2016:  Two suspected Melbourne members of the Mongrel Mob threatened a man by holding his head near a masonry saw when he refused to pay them $32,000.

The case against two suspected Mongrel Mob members is believed to be one of the only times that members of either of the New Zealand-based gangs have been charged with serious criminal offences in Melbourne.  The Melbourne Magistrate Court heard that Denzil Kapene Te Amo and his father Timoti Kapene Te Amo were working as debt collectors for a masonry factory, and had agreed to split the takings 50/50 with the factory’s owner.

But the pair – known as ‘T’ and ‘Boss’ – believed they were getting a raw deal and reacted with extreme violence, police say.

They allegedly stormed the masonry factory, grabbed the owner in a headlock, and bent him over a masonry cutter – a huge machine designed to cut stone – while it was still running.

It is alleged they demanded $32,000 for their services and told the victim to pay up or they would cut his head off.  One of the men then lifted the owner into the air by his neck, while the other went through his pockets, the court heard.   The father and son then allegedly bundled the owner into a car and forced him to drive to a nearby service station so he could get out cash.

The man told them he did not have a bank card, so they doubled back to the factory so he could recover it. He managed to get away and fled as one of the men chased him, yelling that he would “go back to his house and rape his wife”, police said.

Social media records indicate that the Mongrel Mob has had a presence in Melbourne since 2010. Other images indicate they may have formed an allegiance with the Comanchero outlaw bikie gang. 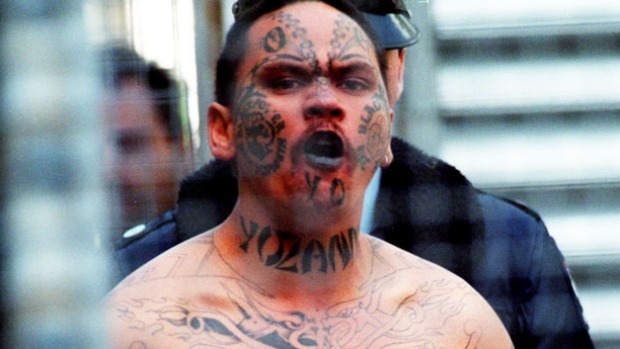 Mongrel Mob has been recruiting in Melbourne’s outer west since 2011, established itself in the Werribee area (Seat of Lalor) and is actively recruiting Maori and Pacific Islander members from the surrounding suburbs.

Two notorious North American bikie gangs – the Mongols from California and Rock Machine from eastern Canada – established chapters in Melbourne in the past two years, but were forced out by the Comancheros.

Members of the Mongrel Mob began a chapter in Perth in the mid-2000s but were run out of the state by the existing “Big Four” bikie clubs.
The Mongrel Mob’s “patch” is a snarling bulldog with a studded collar and wearing a Nazi helmet, and often includes a swastika.

In 2012, a 20-year-old considered an associate of the Mongrel Mob was jailed for stealing a car after holding a machete to the owner’s throat and saying “give me the keys”.

“You had became involved with a gang or group who call themselves the Mongrel Mob, which perhaps gives some idea of their collective level of intelligence,” County Court Judge Gabriele Cannon said at the time.

The man told the court the mob forced him to perform criminal acts, including delivering another stolen car to New South Wales.

Rival ethnic black gang, Black Power, was formed in Wellington directly to counter the Mongrel Mob, whose motto is “sieg f—in heil” and whose members are often tattooed with swastikas.  Black Power’s have members in the Sunshine region – mudfish territory!

Black Power’s Brownie Mane (image above), now 43, was sentenced to 17 years non-parole alongside three associates for the 1996 assassination-style shooting murder of Mongrel Mob’s Chris Crean when he answered the door of his home in the suburb of Marfell in New Zealand’s New Plymouth.

When Australia has already invited in enough ethnic filth, why should we have to tolerant more exports from John Key?

Immigration Minister Peter Dutton needs to crack down.  Just deport the scum, before gang turf war breaks out with the likes of the Rebels, Comancheros, Hells Angels, Bandidos and Finks.

Victoria Police’s Echo Taskforce has been aware of both the gangs’ activities across Melbourne and says it continues to monitor them, but has done sweet f#@& all.   Victorian Police could do with sacking its PC command brigade and replacing it with a squad of JW Peppers showing some southern hospitality.