‘Auxilliaries and ‘blowback’- the matter of the Christchurch Shooter’

The ABC has established that the Christchurch shooter had sent a threat to a critic of the United Patriots Front (UPF) three years ago (in 2016). They quote him as saying: 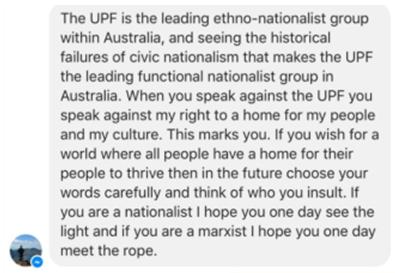 Nationalists have said for more than a decade, long before UPF was founded, that the so-called ‘anti Islamist movement’ was neither ethno-nationalist (sic) nor any sort of nationalist phenomenon. Rather we argued that movements based upon aggressive anti-Islamism were linked organically at their core (ideologically and politically) – to a ‘neo-con’* agenda. We went onto maintain that whatever their ‘external’ qualities or flavours or structures, they would behave in certain ways that would belie any pretense to an independent politics. They would also cite their objection to Islam as a civic or religious one with Muslims challenging their model of culture and values only.

Yes, hard stuff and not Politics 101.

[JH:  *Neo-con is the abbreviation of ‘neo-conservative‘, which since the 1970s has become an evolved variant of the political ideology of conservatism but with specific parameters including features of traditional conservatism, anti-Liberalism (leftism, political correctness), political individualism, qualified globalist free markets (a move toward local industry and jobs protectionism), anti-communism, anti-cultural diversity (multiculturalism – considered a foreign threat undermining traditional national (Western Christian civilization) culture.  The movement has been infiltrated by zionist imperialism. Read More]

Readers should note that our view hardly meant that there were not valid criticisms of Islamic migration trends or Islamism, or Muslim practices. It simply meant that if the New World Order was going to attack Muslim countries for reasons of oil, geopolitics and support for Israel, a propaganda movement on the ground creating an anti Islamist groundswell – was useful.  It meant too that conservative parties could push these people to support their ‘security measures’ and their ‘border control’ fakery such that no real debate on immigration would take place. Their auxiliary function was obvious, but any link could always be ‘plausibly denied’.

But with that comes the danger of blowback. What if some actors in this movement (often just called the ‘patriots’) took anti-Islamism seriously and acted accordingly?  What if some actors went towards violence?  Or what if, say in the UPF’s case, that they moved by effect to try at some sort of independent political function? 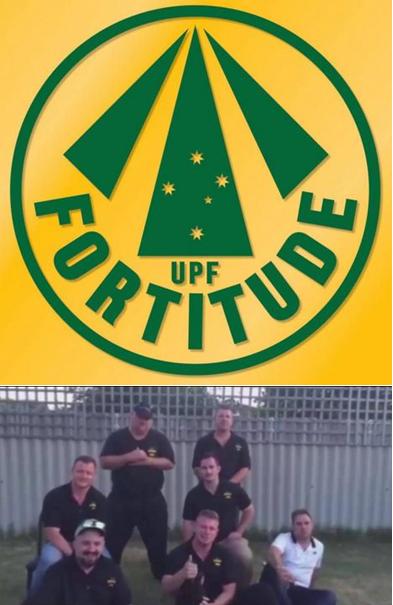 Around November 23 in 2015, UPF had stated its intention to start a political party called Fortitude. However, it failed to sign up the 500 members needed for registration.

Of course, the real problem for (Australian) nationalists at the start lay in the danger of ideological contamination of the broad movements that question immigration and discuss identity. The anti Islamist movement would always place Islam at the centre of their concerns and sideline or downplay other national immigration and identity questions. Through their vector, they could contaminate any moves by other people towards an independent nationalist politics.

Certainly, the history now reveals that the patriots here did not take the nationalist road, but repudiated it. We noted over a year ago that some added to their ‘patriotism’ (sic) by adopting some few nationalist precepts and some ideas from the Alt-Right and said they were actually a ‘new model’ for Australian nationalism.

This mess must ultimately be sorted out. And it will be! There are probably many decent ‘patriots’ – whether from the former UPF or otherwise – who need to move on and who wish to move on. In confronting the history of the last few years, they may yet manage that.

A Melbourne man has revealed Christchurch shooter Brenton Tarrant sent him a death threat after he criticised the United Patriots Front (UPF) ahead of a 2016 anti-refugee rally.

The ABC has obtained screenshots of a Facebook messenger conversation between the man and Tarrant from August that year in which the alleged mass murderer said “I hope one day you meet the rope”.  In the exchange, Tarrant defended the UPF — an anti-immigration group — as “the leading ethno-nationalist group within Australia”.  “When you speak against the UPF you speak against my right to a home for my people and my culture,” Tarrant wrote. “This marks you.”  Tarrant warned the man to “choose your words carefully” and “think of who you insult. I hope you one day see the light and if you are a Marxist I hope you one day meet the rope.”

The recipient of the threat, who wanted to remain anonymous, said he went to Eltham police station in September 2016 with a copy of the conversation to warn officers Tarrant could be dangerous.  He claimed police advised him to block Tarrant on social media and did not take an official statement.  The man said he was shocked when he heard news of the Christchurch shooting, and realised he had a run-in with Tarrant years earlier.

“I feel a sense of guilt and have been beating myself up,” he told the ABC.  “But at the time I thought I was the only one in danger.”

In a statement, Victoria Police said that based on the information provided to them by the ABC, they had been “unable to locate a complaint made by the victim in 2016”.  “Whilst we will not comment on this particular case due to the live court proceedings in New Zealand, we would reassure Victorians that we have strong arrangements in place for monitoring and tracking people who pose a threat to the community.” 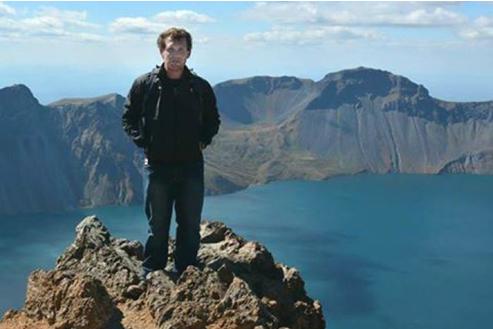 This photo of Tarrant, taken in North Korea, matches the one in the death threat.

The man said he attracted Tarrant’s ire after criticizing former UPF leader and neo-Nazi Blair Cottrell ahead of the rally in Eltham, in outer eastern Melbourne.

An investigation by ABC’s Background Briefing last month revealed Tarrant had offered allegiance to Mr Cottrell around the same time and even referred to him as “Emperor” on Facebook.

The Facebook messenger exchange is the second recorded instance of Tarrant using the words “meet the rope” when referring critics of the white nationalist movement.  The phrase is from a white supremacist novel, which has inspired hate crimes and terrorism, and alludes to a public execution of “race traitors” such as professors, lawyers and journalists.

Tarrant had no prior convictions before the March 15 attack and was not on any Australian or New Zealand watchlist.  Security and intelligence agencies around the globe have been scrutinising his travels across Asia and Europe since the shooting to determine whether he had any formal connections to hate groups.

Last month, the Austrian Government confirmed Tarrant made a “disproportionately high donation” to the white nationalist group Identitarian Movement in 2018.   The ABC also revealed the alleged mass murderer identified his targets two days before the shooting, on the same social media account that was used to livestream the attack.

In a series of posts on March 13 — recovered from a partial cache from his now-deleted Facebook page — the alleged killer posted a picture of the Noor mosque.   The discovery raised fresh questions about what security agencies and police could or should have known about the impending attack.

Tarrant, who has been charged over the 50 deaths, has been remanded in custody until June 14 and will undergo a mental health assessment.