Australia has another home-grown terror group, a zeal of vegan extremists labelling themselves contrarily ‘Aussie Farms‘, which of course they’re not.  They target and attack Australian farms, wanting them all ideologically shut down.  They want to ban farms and farming.  They’re raving leftist loonies!

Their main targets were the MC Herd abattoir in Geelong, the Southern Meats abattoir in Goulburn, and Carey Bros Abattoir in Warwick as well as farms in Windsor outside Sydney.

Around 2.30am today, nine anaemic vegans invaded the Goulburn abattoir on Mazamat Road, chaining themselves to a conveyor belt. 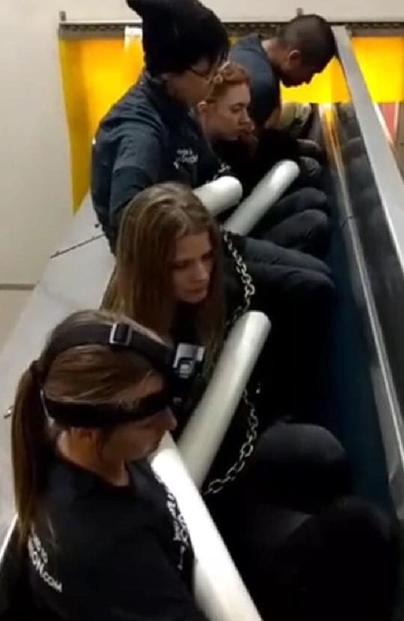 Some enterprising worker should have started it up – to see how fast the key unlocking would take.

Goulburn Police Rescue cut the terrorists off and arrested them.  Three unemployed women refused to walk from the abattoir and had to be carried into the awaiting police paddy wagon.

Decent volunteer sympathisers were on hand to offer the anaemic nine – chops, steaks, sausages and burgers – may be with side salad.

Three unemployed men, one aged 46 and two aged 22, and six unemployed women, aged between 21 and 61 were taken to Goulburn Police Station where they will be charged.

They blocked the entrance to the MC Herd abattoir in Geelong in Victoria.  At 3:30am in Warwick in Queensland, more than two dozen feral vegans raided Carey Bros Abattoir and chained themselves to equipment.  A mob of more than 200 unemployed others remaining outside the facility chanting some leftist crap.  Terror leader Brad King co-ordinated the raid and remains, well unemployed.

Farmer David McNamee said he feared for his family as they were alone with no protection during the invasion. He added when he ordered the demonstrators to leave, they ignored him.  Another owner of an abattoir in Yangan, just 15 km east of Warwick in southern Queensland, was extorted by the same unemployed extremists.  They forced him to surrender three of his lambs else they would escalate their protest and stop production for the whole day. 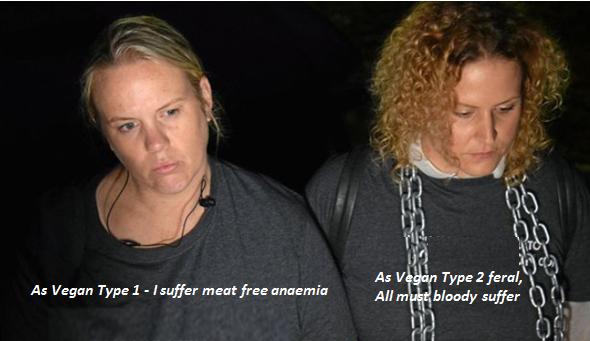 The abducted lambs have not been seen since, but locals suspect that a big meat barbeque held later than day may reveal their demise. 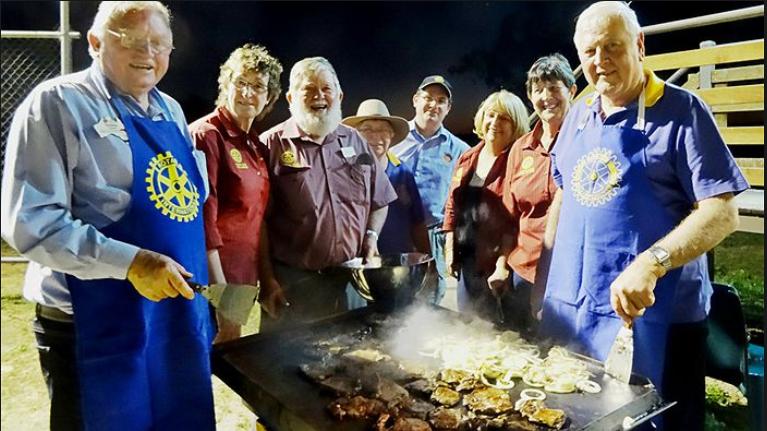 Rabble organiser Christine Lee has been arrested and faces numerous counts of trespass and affray.  Nine people have been arrested at an abattoir in the New South Wales Southern Tablelands.  Apparently, the timing had all to do with marking one year of some propaganda video by the group. 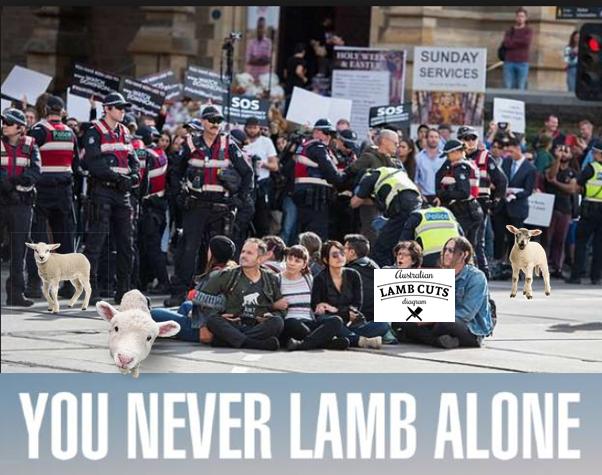 This cliché protest intersection in front of iconic Flinders Street Railway Station was chosen by islamic terrorist Dimitrious Gargasoulas in January 2017, as well as African rioters of Moomba and Indian students protesting against Indians students murdering Indian students in Melbourne.

New South Wales Agriculture Minister Mark Furner said he’d had a “gutful” of activists putting farms at risk and said new regulations were being drafted to allow police and agriculture ministers to issue protesters with on the spot fines.  The Department of Agriculture will also form a taskforce with the state police intelligence unit to try and prevent animal activism attacks on farmers.

Nationals senator John Williams said there could be “punch-ups” if protesters continued targeting farmers.  “Farmers are not violent people. But when these people go out there and cut the fence and let the livestock out on the road, well farmers might get angry,” he told Sky News on Monday.

Australia’s Prime Minister Scott Morrison has admonished the group as “un-Australian” and that invading farms and abattoirs was “shameful”.

He told the media,

“This is just another form of activism that I think runs against the national interest, and the national interest is being able to farm their own land. Aussie battler farmers are doing it tough enough without the added hassle of un-Australian animal activists and green-collar criminals.  If there are pastoralists and farmers that are in a position to actually bring a civil action against these groups … then the Commonwealth is totally open to supporting them in a test case.  State and territory governments should ensure that the full force of the law is brought against these green collar criminals.”

CEO of the National Farmers’ Federation Tony Mahar similarly slammed the behaviour of the protesters, saying it was extremely concerning.

“What we’re dealing with is radicalised extremists, and they are that.  “They have philosophical views. They are forcing on to other parts of the community. So farmers are law abiding, hard-working citizens going about their daily jobs of producing all the food and fibre that Australians love.  It’s just irrational behaviour, unreasonable behaviour. Can you imagine if 100 or so people dressed in black turned up to your place of business or your home and forced their views on to you because you have a different view to them?  It is unreasonable and we would love the community’s support to sign our petition at farmers.org.au to bring some deterrence to these people. They’re terrifying the population.”

Both Mahar and Morrison continue to support Sam Kekovich’s call for Australians to eat lamb on Australia Day, indeed right throughout Australia Week! 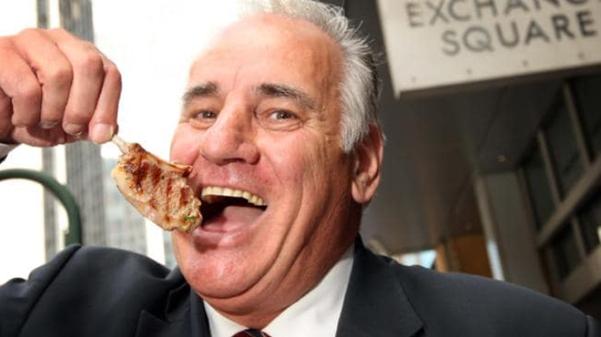 The vegans then cuddle feral foxes!

The Centrelink lefties of extremist group Aussie Farms have gone feral trespassing on farms across Victoria, New South Wales and into Queensland in some co-ordinated social media drug-fuelled frenzy. 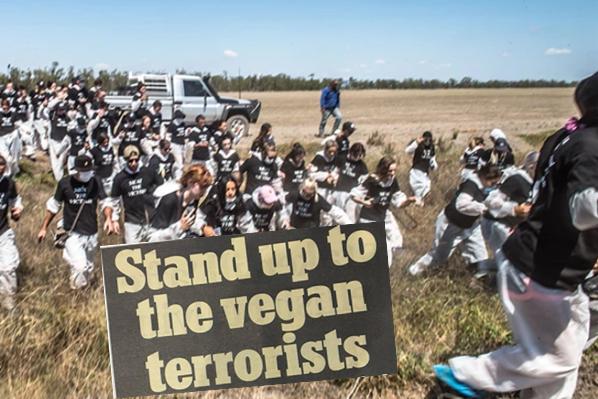 The Greens Vegan Faction has swarmed abattoirs in Goulburn and Queensland, and disrupting traffic in Melbourne’s CBD.  Typically the unemployable dial a crowd leftards do the chant: “What do we want? Ban Meat Now!” with some sitting on tram tracks near the Flinders-Swanston St intersection. 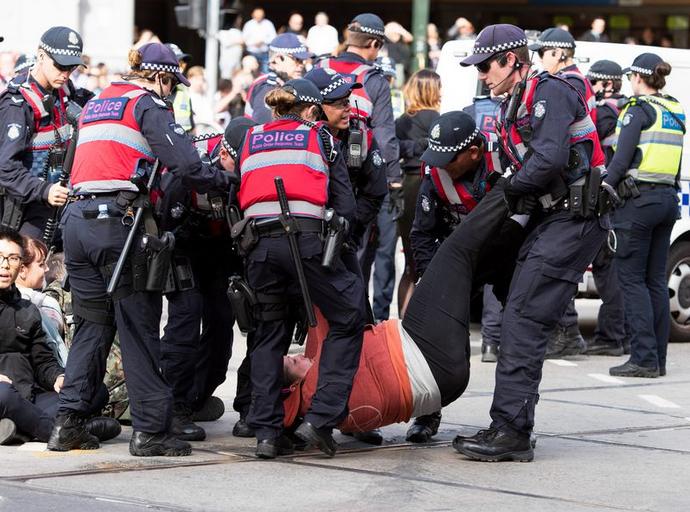 Whale of an activist – it surely can’t be vegan

Police need to arrest, charge them with trespass and affray and photo ID these criminal extremists.  They need to be sued for economic loss and have their family’s assets seized, they’re welfare cheques cancelled.

The charitable status of Aussie Farms Incorporated needs to be revoked because the outfit is simply advocating not protest but criminality. It’s lead terrorist Christopher Delforce is wanted by police in Victoria for mass acts of trespass and for breaching the privacy of hundreds of farms by listing their addresses on the Internet since January 2019. https://map.aussiefarms.org.au/ 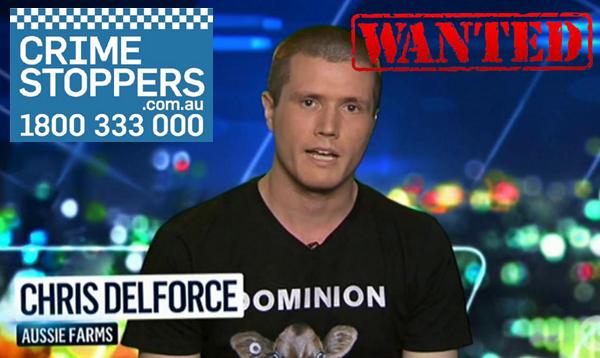 Other directors include Matthew Lynch and Melissa Donald.  Aussie Farms is clearly involved with criminal activity and this needs to be reported to police and to the Australian Charities and Not for Profits Commission (ACNC).

The same goes for their support base:

They all need their charitable status revoked.   The Animal Justice Party needs to be de-registered as a political party.

In the wake of a woosy fence sitting government and patsy opposition, it’s time that White Australia stood up to the anti-Australian extremism.