Sydney’s so-called ICAC (Independent Commission Against Corruption) is a toothless committal hearing, usually steered by the state government of the day to get even with players in the previous government on select issues. 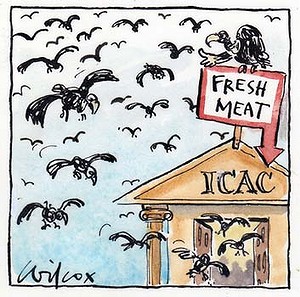 ICAC’s selectivity of cases, makes it no more than a kangaroo court and its commissioner a glorified report writer.

If only they could exterminate the corruption

Does the ICAC have the power to prosecute people?   Answer:  “No, however the ICAC can make recommendations that the Director of Public Prosecutions (DPP) give consideration to prosecuting individuals for criminal offences.”

So what is the point of ICAC?  Polly payback, that’s it.

ICAC’s stymied powers can only recommend double handling of a case in a criminal court.  This is a duplication of what the DPP would have done anyway, less the TV soap opera.

If a commission against corruption can’t even convict certified corrupt former Labor MP Eddie Obeid, who can it convict?  Without Obeid behind bars, ICAC has no credibility and the NSW Government has no credibility. 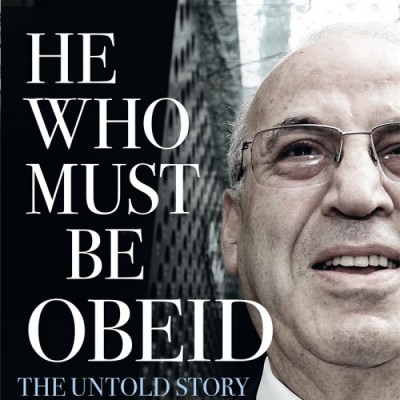 “Some wog Lebanese (thing where) we all eat from the one bloody plate.”

Other Australian states have simply copied the NSW model’s inquisitorial methods under their own branding.  South Australia has its ICAC. Victoria has its IBAC. Queensland has its QCCC. West Australia has its CCC. Tasmania has its Integrity Commission, Each ICAC equivalent is still a media circus that achieves little aside from political payback by media embarrassment, sapping taxpayers of hundreds of millions.  The ACT and Northern Territory just have underfunded “ombudspersons.”

While federal politicians in Canberra are without any integrity watchdog. There is no Federal ICAC because the Labor/Liberal oligarchy felt it was against their political hides best interests.

We would suggest adopting the USA Racketeer Influenced and Corrupt Organizations Act or RICO law.

Far more effective and efficient would be to establish a new ‘National Anti-Corruption Court’, not accountable to the government of the day, but:

Instead, Sydney’s ICAC is seen by most in New South Wales as just a theatre for political- economic drama.  It is a circus.

We may not always see a bag of money being passed from one actor to another; sometimes it is not that clear. Graft can be hidden through the market place.

Why is ICAC for instance not investigating the multimillion dollar dodgy Chinese mining and tourism deals with Liberal politicians?  Why is the $500 million Chinese Disneyland property development deal with Wyong Council not being investigated by ICAC?

Why hasn’t ICAC investigated the dodgy property investment deal with the Chinese Government involving a proposed Trade Centre.  It was a trojan horse con to facilitate mass immigration of Chinese to the Riverina.

ICAC won’t investigate the rise of China’s corrupt interests in Australia in New South Wales.  It’s called Chinese Capitalism and we’re seeing this manifesting through the extent by which Chinese Imperialism is penetrating into Australia on every level of business and politics and “policy-making”.

The ICAC must take into account this political-economic conflict when looking for corrupt conduct.  So why have the ICAC declined to investigate Chinese-connected political corruption in NSW ?   This apparent corruption can also be described as economic sabotage as well as brazen deception of the public. 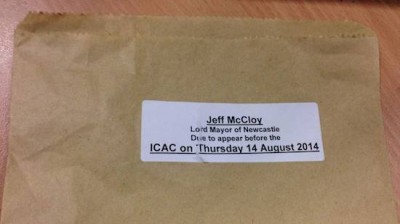 We provide examples: the Wagga Chinese Trade Centre fiasco, where actors in that game were identified as Immigration fraudsters by Scott Morrison (when in Opposition) and were also involved in the Fitzgibbon Affair.  Liberal Party local councillor for Wagga Wagga, Andrew Negline, admitted to being offered “political support” from the Chinese developers.

This project was a baby of none other than Liberal Party Premier of NSW, Barry O’Farrell’s and Liberal MP Daryl Maguire.  Perhaps Mr O’Farrell is relieved that all that is (allegedly) hanging around his neck is a bottle of “red”?

More recently we have the situation of the China Theme Park on the Central Coast at Wyong and the questions surrounding Mayor Doug Eaton, who has already been publicly
identified as being embroiled in the Eightbyfive slush fund, and in various other improper matters.

Local Councils in New South Wales are becoming increasingly involved with Chinese developers. Yuan talks! It appears where big Chinese money and development is the order of the day, allegations of political corruption don’t get off the ground.  Conversely, major Chinese projects don’t “get off the ground” unless there are corrupt politicians involved, like Barangaroo and its Millers Point Clearances. 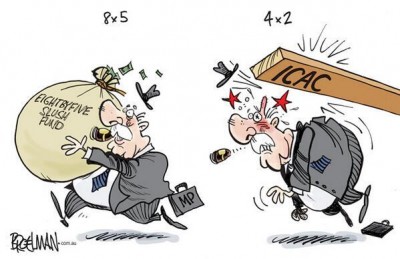 ICAC Cases are selected by the Government of the Day

We allege the ICAC is a vehicle to placate the masses with perceived anti-corruption
efforts, based on seemingly select issues.  Is it all an illusion based on political-economics?  Why are Federal politicians exempt from investigation when found to be connected to corrupt matters occurring in New South Wales ?

Is there some “special rule” which grants local councillors impunity from corruption investigations into matters involving Chinese projects ? Is this an insane extension of the imaginary “laws of political correctness ? 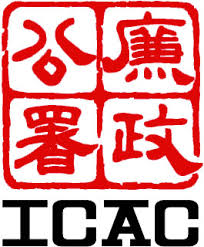 The fundamental problem with ICAC is that it won’t stop the corruption.  Mark Rolfe, a Lecturer at the School of Social Sciences and International Studies at the University of New South Wales, says ICAC’s framework for operating limits its ability to put those it finds corrupt behind bars.

“[ICAC] is doing a lot of the investigation itself as opposed to the Director of Public Prosecutions (DPP) which is not an investigative arm,” he said.  “The ICAC makes recommendations to the DPP after its investigations and can find people corrupt based on a balance of probabilities.”   But for someone to be found guilty of a crime, they must be convicted beyond reasonable doubt.

“I don’t think it’s only DPP [charges] that will restore public confidence; Parliament needs to do something about [corruption]. There is the capacity for Parliament to expel [malfeasant politicians]; although both major parties don’t want to go there at the moment,” he said.

“There needs to be things done with parties and donations, because now the ICAC is exposing a trail to the federal level, and there’s going to be pressure on the federal Liberal… and federal Labor parties to do something about this.”

We would suggest adopting the United States Racketeer Influenced and Corrupt Organizations Act or RICO law.

Under this type of Act many who have been found corrupt under ICAC rules and indeed those seemingly immune from investigation, would by now already be behind bars.

We are bemused that Labor’s Joel Fitzgibbon remains in Parliament despite being dumped as Defence Minister for shady involvement with Chinese “developers” and “spies”. Under the RICO Act, Fitzgibbon would be behind bars as a racketeer, not enjoying his current position of Federal Member for Newcastle.

Politicians have a notorious record for creating, with great verve, ever more Rules, Restrictions, Penalties and Losses of Freedom for the General Public. Perhaps, when they review this issue, in order to be in “the right frame of mind” they might adopt the same contempt for themselves as clearly they hold for the General Public.

But then reflecting on Labor’s Craig Thompson?  Well some are just so above the law. 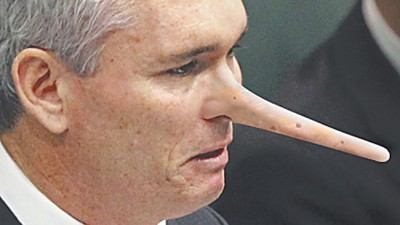