Not only has Labor’s privatisation of public owned utilities lost public services to a profit enterprise, but the price hikes are also due to decades of Labor revenue gouging of public dividends (rates and charges).

This denied the electricity companies the necessary revenues to maintain and reinvest in updating their critical infrastructure.  So the poles and wires and substations were run down.    Successive NSW governments have used networks as a source of revenue to support other services and polly pet projects like Labor’s $2 billion dollar Kurnell Desalination Plant white elephant in 2010 and Treasurer Roosendaal’s $100 million Homebush V8 Supercar racetrack. 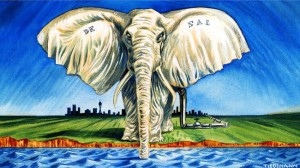 Labor’s relentless milking of the State’s electricity dividends revenue stream from 2001-2010 saw it rob family households of about $2,700 over 10 years from rural NSW, almost $2,500 for Sydney and about $1,200 from western Sydney and the Illawarra.    NSW Labor’s Treasury over ten years reaped more than $6 billion.

The LibLab’s national Productivity Commission is just the national equivalent of IPART – a Sherrif of Nottingham robbing the people to fund government extravagance.  Privatisation and price hikes are its two key modus operandi. 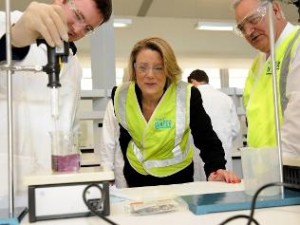 Thanks to the Keneally Labor Government, then Energy Australia (which supplies electricity to 1.7 million taxpayers in Sydney, the Central Coast and the Hunter Region) was sold as renamed ‘Ausgrid’ in 2011.   Labor gouged a special dividend of $1.4 billion from the proceeds of the sale to Chinese owned, TRUenergy Pty Ltd.

Similarly, as part of Labor’s flogging off of public assets,  the Keneally Labor Government in 2011 sold Integral Energy (eletricity supplier to taxpayers across western Sydney and the Illawarra region of NSW) to Origin Energy for $3.2 billion, which then renamed it ‘Endeavour Energy’.

Now NSW has a decayed power infrastructure controlled by a private duopoly and ballooning electricity charging has become unaffordable to many households.  Many families have seen their power switched off.

Labor has created a swelling underclass of Australians living in poverty.  So much for Labor values.  On its website NSW Labor claims that it is dedicated to keeping Australia fair.

“Sharing our commitment to Labor values means working together to make sure that the benefits of rising prosperity are shared fairly and underwrite a better and fairer future for the next generation.”

No!   Labor Values Itself.