Coal seam gas has emerged as a major industry in Australia in little more than a decade.

The scale and speed of its growth has been nothing short of astonishing: billions of dollars have poured into regional areas; new jobs have been created; state and national coffers have swelled; export contracts have been signed and sealed; massive liquefied natural gas facilities have been approved for construction at regional ports.

Farmers fear they are losing control of their land. Miners and some politicians say coal seam gas offers a much greener energy choice. Environmentalists and other politicians have cast doubt on those claims.

The ABC’s data journalism project has pulled together information from dozens of sources to provide an insight into the promise and the dangers inherent in the coal seam gas rush.

This is the advent of LibLab Coal Seam Gas Fascism rolling across Rural Australia. 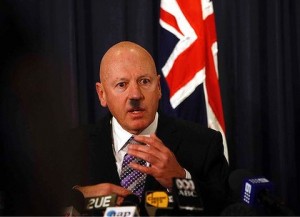 Lock the Farm Gate to the corporate mining fascists!