MIKE HOLT, THE VANISHING GUN, AND THE NAZI EXPRESS TO MELBOURNE

When first Mike Holt crossed our path we figured we were dealing with a sad old git who was jealous of everyone in the patriot movement. But lately, we have found out more about this ‘identity’ and just how badly he is involved in sabotaging the politics of the Australian Alternative Right. And readers, you might want to strap yourself in to your swivel chairs, because they are about to start spinning.

Firstly, we were correct about him being a sad old git. The man is a walking Horlicks commercial. He could well be the poster grandad for regular prostate check-ups. He just has that look. But we named him and his BFF, Howard “Foghorn Leghorn” Crawford, as Liberal party stooges out to royally roger the patriot and nationalist movements. Of this, we were absolutely one hundred percent correctamundo.

But before we get down to brass tacks, let’s remind our loyal readers who Mike Holt is.

A Bit about Mike

Mike runs an unregistered micro party called Restore Australia, which is virtually indistinguishable from the zillion other patriot parties banging on about Islam and nothing else.

You can read all about Mike, as told at great length by Mike, at this link. Mike likes talking about himself. Yes, he has one hell of a hagiography. He describes himself as an ex-Vietnam veteran. Only, this is massive bull’s brekkie. Mike has been accused before of telling porkies about his involvement in Nam. As such, there is a link on his Restore Australia website to a Department of Veterans Affairs certificate that doesn’t actually prove he did anything but kick back in a cushy role on a base in Thailand as part of the RAAF’s signals intelligence corps. So the dodgy c*nt (sic) never went anywhere near “the Nam”.

In fact, Mike spent much of his life in Thailand, and we have information that he was involved in the seedy nightclub side of business out that way. More on that is coming. But aside from what you can read — and take with a grain of salt — on that site, Mike is involved in Information Technology, and runs a business that helps users spam Facebook with junk advertisements, or nuisance posts. We’re not sure what other interests he has in IT, but he is commonly accused of hacking people’s pages. Therefore, the link between Holt’s IT skills and manipulating intelligence is one that should not go unnoticed.

Aside from this, he presents himself as something of a renaissance man: but on that score he is more realistically a wide boy spiv like Arthur Daley from Minder. He is the author of a really crap book, and flogs his soulless artwork on the Internet for $500 a pop. But don’t be misled; Holt is far from being a fool; despite these obvious vanities. Yet, he is NO war hero, and he is even less of a patriot, because if he was the latter he would not be setting about, like his cohort Howard Crawford, to destroy movements.

Anyway, if you follow the links we’ve highlighted you can refresh yourselves with everything we have had to say thus far about this constipated blowhard and his incursions into patriotism and nationalism.

Oh, and he’s a race traitor who only just recently blurted out his absolute love and preference for Israel, going so far as to say that “without Israel” none of us “mongrels” would exist. An odd thing for a supposed ‘patriot’ to do, but hey, we’re just getting warmed up here. What comes next is even worse. 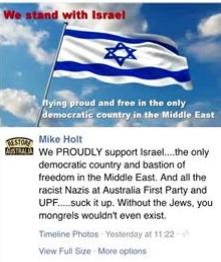 The PDLA, the GUN, and the bus to MELBOURNE

And now we get to the rub.

When the bus departed from Sydney to Melbourne for last July’s Reclaim Australia rally, Mike Holt was on it. He was headed there with an individual who would be all over the news the following day after Victorian police claimed he had been arrested with a gun. He had not, but rather he handed the pistol to Sydney police before embarking on his journey. Prior to that, NSW Police had known about his intention to visit a firing range in Melbourne while he was down there. Mike Holt had booked the car that was to drive them both. It is safe to assume that the two had to have travelled as partners.

The person named by the Victorian police, and subsequently the media, was the leader of the Patriot Defence League of Australia, which sources describe as being Holt’s hit squad. Currently — and on Mike’s behalf — this mainly online group is doing Holt’s bidding by attacking the UPF and Fortitude, for reasons that we’ll offer up shortly. They have announced their intention to head to Toowoomba and try to muck things up for the UPF.

That night, as is well known, Ross “the Skull” May, and fellow Squadron 88 ‘expendables’ got on that same bus. Nick Folkes, who is a close comrade of Crawford’s and a mate of Holt’s, was present with them before departure. When the bus hit Albury, Ralph Cerminara was tipped off that the S88 boys were aboard. The Skull, and Tyler Winchester (pseudonym), were ejected in the freezing cold of night.

Now, these are the elements that signal what Whitelaw Towers calls as being the set-up. We have S88, which Holt’s friend and fellow Liberal party hatchet man, Howard Crawford, had been involved in sending off on their journey.

Crawford decries “Nazis” and has placed much stock in a video of Dr Jim Saleam, who entered premises that Crawford himself, as well as other figures of his ilk we shall name soon enough, have entered. Dr Saleam was filmed along with Alex Norwick praising the late President Gadaffi. Crawford used this and the presence of Swastika flags in the apartment to try to discredit Jim, but it failed. Crawford’s hypocrisy, in being (and this was the terminology he himself used) “the fuhrer” of Squadron 88 and condemning “Nazi Jim” is manifold, and we’ve visited that topic before.

So we have a man who “hates Nazis”, but who is up to his neck in what was then one of the most media-notorious Hollywood Nazi groups, along with a close friend who also hates Nazis — and a gun altogether on a bus headed down to a rally of a movement that both have a vested interest, and a track record of, screwing with.

Only three parties knew about the PDLA leader’s gun — the NSW police, the PDLA leader, and Mike Holt. NSW police had confiscated the gun, but the following day the Victorian police ran a story — that now seems to have been hatched out before any of this even happened — claiming he was caught WITH a gun. Interesting mistake… Clearly, the NSW police knew that the gun was confiscated.

Mike has a knack of being in touch with media, and he is always there when damaging stories are breaking through one way or another. He was at the lead when phony claims about the tear rune used in the UPF’s logo were coded ‘Nazi’ symbology. The story, which Mike pumped, ran very quickly on Slackbastard. Mike Holt has super slag-hag Indie Norris on his friend’s list. Funny that, given how he ran with the libelous and illegal recording of a phone talk she had with UPF Perth Leader Dennis Huts. And Holt was central to events in Melbourne, booked with a car ready to go with an “expendable” carrying a gun with a bus containing Nazis, when Victoria Police released what was obviously a pre-written statement.

Holt knew about the gun, Crawford provided the Nazis and the aim was to bring down Reclaim. Why?

So why are they doing it? It’s the Liberal Party, stupid!

Tony Abbott was instrumental in jailing Pauline Hanson, an innocent woman, to relieve the Liberal party of any competition from her One Nation Party. The Liberals have a fine tradition of dirty tricks when it comes to defending what they perceive as being their political turf.

Howard Crawford was a Liberal party district leader, and it is our contention, everything he does is on behalf of the Liberal party. He infiltrated even the Australia First Party to try to bring it down. The whole using Squadron 88 was to sabotage the competition on behalf of his beloved Tory party.

At the time of the bus ride last year, the Reclaim movement was at its peak. It would have been the Stinger Missile of black ops if Holt and Howard had collectively managed to have Ralph and Shermon’s bus revealed to have had “Nazis” and a “gun” aboard. Holt hates Burgess and Cerminara, so it would be little surprise there. He also hates the UPF — and in fact he hates anything that his Tory mates hate. He has a background in intelligence, is an IT professional, and has openly declared his support for Israel. Tony Abbott is also a sucker for the Yid, and this is where we come back to Tony, because at that time the RA movement was making his government look weak on Islam. Cut to the present, and Turnbull is proving a lame duck for the Libs. The right wing faction of the Liberal Party wants Tony in charge again, and last week he announced he will recontest his seat.

Discounting kosher micro-party preference-support for Liberals, the persistent onion in the far right (we use the term for convenience) ointment are those recalcitrant United Patriot Front lads, and their soon-to-apply-for-registration Fortitude Party. Then we have the Australia First Party, and many undecideds being swayed to a harder line on Islam that they are not going to get by supporting Turnbull’s Liberals. If Tony is to come back, and the Liberal hard right is to succeed, they need to shoo away anything that is likely to steal the track from underneath them.

And that is what Holt and Crawford do — they use their ‘expendables’ and whatever other tools at their disposal to attack those competitors.