Today, as traditional Labour Day (May Day), Australia First Party members held demonstrations in four cities. As we will discuss further on the party’s national website tomorrow, we aim to Reclaim May Day from the globalist Laborites and the extreme-left. We publish here a report from an Adelaide organizer:

“The SA battlers for Australia First Party descended upon Harvey Norman again today, this time in Woodville. It was an interesting choice of store, with roughly 90% staff non-European, (unbeknownst to us until today). Yes, jimmies got rustled.

When we kicked things off at about 12:40pm, the reaction was instant. We had an observer inside the store who said staff were flipping out! It wasn’t five minutes in before the morbidly obese Store Manager with rustled jimmies came storming out and demanded that we “leave the area and do your protest somewhere else”. “Not likely, mate. We have our right to protest,” he was told. Eventually, his distraught state subsided when we agreed to take our banner 5m to the right, (away from the entrance). 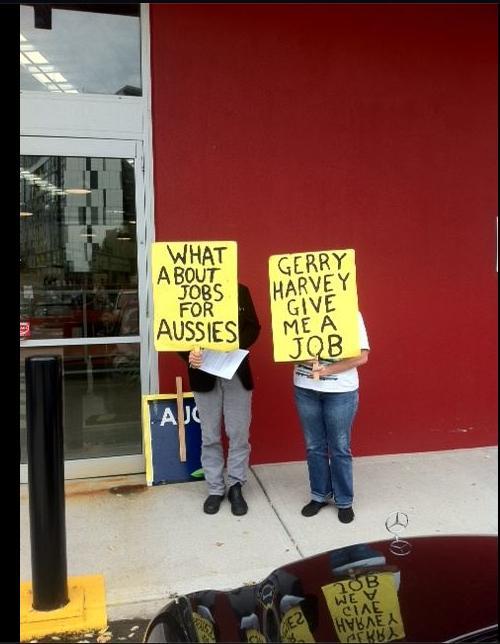 We thus carried on, four men holding the banner and placards, three of us patrolling the front entrance area approaching shoppers, handing them our material and telling them what our demonstration was all about. One of our members struck up a conversation with a father of a young family who was very interested in what we were up to and even asked to sign up, to which we happily obliged him with membership forms.

About 25 minutes in, we had a copper rock up. He spoke to the Fat Controller first up; then he came over to us to say g’day. He said there was no issue and that the store hadn’t phoned police, but one of the flustered individuals in the car park of an obvious Marxist mindset had done so. We shared a couple wise cracks. He asked how long we’d remain there, (about another 10 minutes). Then he sat in his car while we carried on.

We finished up once again at a nearby pub to knock back a few beers, share a few laughs and reflect on the day’s efforts.
Our overall reception was roughly about 70% percent positive. One factor that stood out to us yet again, was that the ‘late-teen to early twenties’ demographic displayed ‘disgust’ and obvious effects of school-system brainwashing, while most folks aged late 20’s on upward were very receptive and well-mannered towards us.

We all agreed it was a job well done.

A bit of ruffled feathers and controversy is always spirit-raising. And both the Party’s name and Cause was furthered today!”