Australia’s Defence Minister Major Marise Payne insists her weight has had no impact on her meeting her operational tasks.

The sloth puppet with no idea claims she’s on top of all her ribbon cutting, cake cutting, luncheon launches, meets and greets, TV presos, hand shaking and assorted drinky poos.  Long lunches with foreign pollies from Indonesia, Fiji, Italy and Japan and then a junket to Brussels.

So where is the bariatric Defence Minister when Australians have a cyclone bearing down on them?

“I know the pointy end of a boat when I see one”, Major Payne insists, “don’t you worry about that. HMAS Canberra III and HMAS Adelaide III, they’re beauties aren’t they.  They’re the pride of the fleet, not a scratch.  The big decks are just ideal for big cocktail parties on the harbour.  We’re just trying to tweak the bow thrusters to make the ships go sideways.”

“Just you wait and see.” 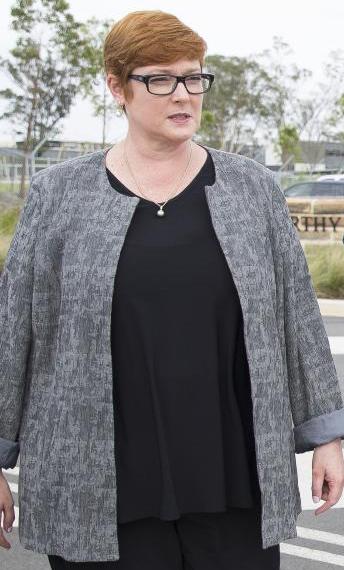 Physically repugnant, the sloth has no experience in Defence, only in the human rights portfolio – women’s rights, deviant rights, Aboriginal rights, migrant rights, minority rights, feminazi rights, blubber rights – just so long as White Australians have no rights. But in the Liberal Party it’s not what you know, but who you pander to – like Liberal polly husband Stuart Ayres.  She’s just another career politician who did law to get into politics.  Of course she joined the Young Liberals at age 23 and grabbed presidency two years later.

Heading up the Liberal Wet Faction, Major Payne is a self-confessed neo-liberal “progressive” feminazi, more aligned to socialism, deviants and Asians than to the needs of Ordinary Australians. She’s a card-carrying misandrist in Gillard’s Emily List coven.  In Defence if she was male she’d be a soft cock with our enemies running circles around her – because she ain’t exactly learned or agile in the military craft. 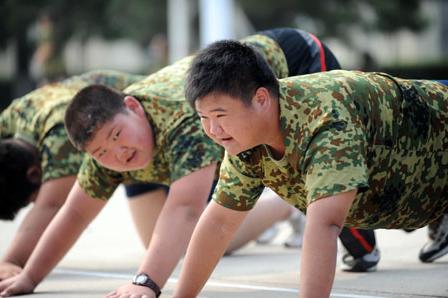 She’d have this lot join our military even if they had AIDS.

Major Payne’s interested in foreign issues because she doesn’t believe in national borders and likes to indulge in overseas business class travel on the taxpayer purse – to Belgium, Japan, Indonesia.  She ain’t no loyalist Thatcher; more like a globalist Merkel wannabe. 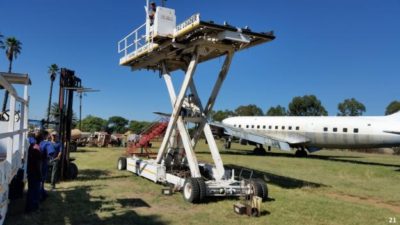 Meanwhile, in North Queensland, the Bureau of Meteorology warned us all of a potential category 5 Cyclone Debbie a week ago brewing off the eastern tip of Papua New Guinea over 700km from Cairns in the Coral Sea.  And hey Canberra, it is still cyclone season across northern Australia, so why was our response readiness standing by down south in Sydney?  What was Major Payne up to back on March 25 when the Bureau declared it ‘Cyclone Debbie’?  MIA because Macca’s was repeating on her? 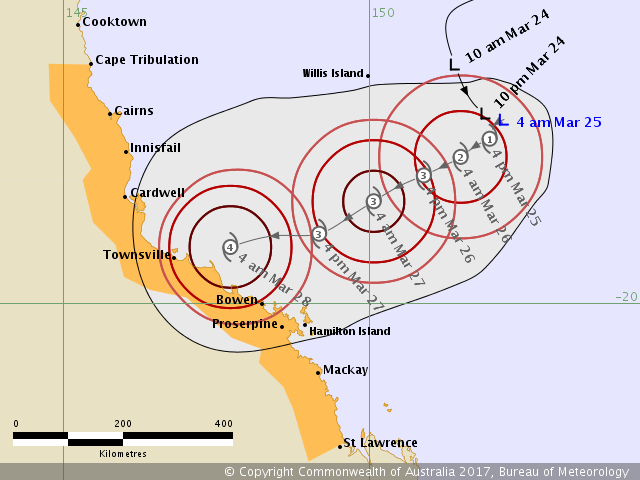 By late March 27, the Bureau intensified Debbie to category 4 reporting wind gusts topping 280kph and warning of a pulverised Proserpine and a buggered Bowen. 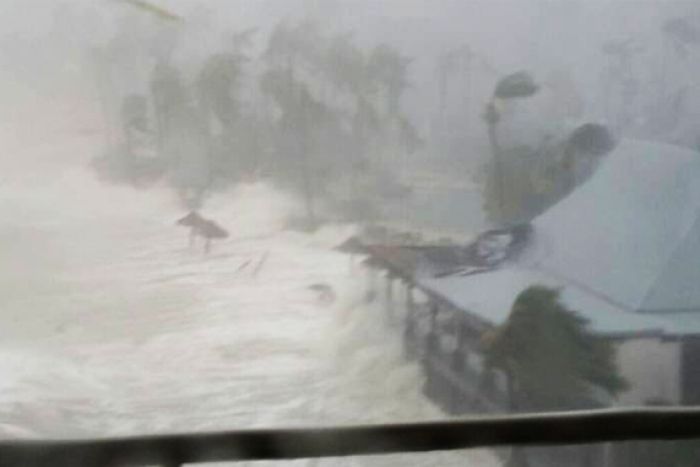 The storm continues to cause mass flooding inland and is forecast to inundate the south-east coastline.

“Everyone is going to be in shock tomorrow, just to see the full impact of this cyclone,” she said. “I think there is going to be a lot of shock and awe in the morning.”  “I’m bracing myself for it.” 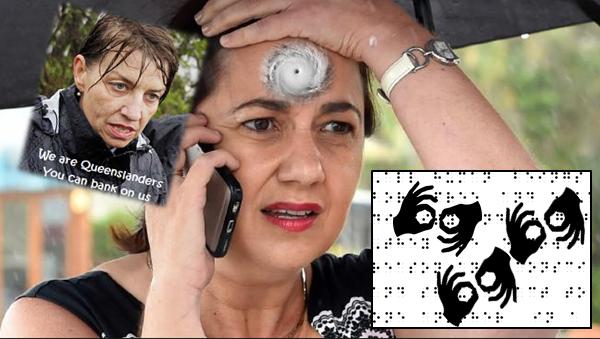 “But we are North Queenslanders, so brush it off.  We’ll show Jay Weatherill how bananas bend!”

Major Payne says, yeah we’ve learned from cyclones Marcia (2015), Yasi (2011) and Ingrid (2005).   In the wake of Yasi, the Navy had all its amphibious landing vessels in maintenance.  Remember HMAS Manoora, Kanimbla and Tobruk were all out of action. They were hand-me-down rust bucket from America anyway.  Back then Defence Minister Stephen Smith criticised the Navy’s “organisational complexity” and “blurred accountabilities”.  He promised “a very clear pathway for the future and a very clear pathway for reform” with no fewer than 24 recommendations from some expensive review.

None followed up of course.

So Major Payne has sent up landing ship HMAS Choules to co-ordinate humanitarian assistance and disaster relief.  She’s another 12-year-old hand-me-down from the UK (formerly the ‘RFA Largs Bay’) which cost us $100 million and that’s was before more millions had to be spent on critical upgrades.  Idiot K Rudd used it for taxiing illegal boat people from Indonesia.  It has a history of power failure.

The Australian Navy has a history of amphibious fleet capability failure and reliance on unreliable expensive rust buckets.

Hold on Whitsundays, we’re on our way…’Serving Australia with Pride’

Chief of Defence, Air Chief Marshal Mark Binskin, decided to finally dispatch HMAS Choules from Sydney the day before Debbie hit Queensland “to be ready to support recovery efforts if required”. HMAS Choules is half the size of Adelaide and Canberra.  It has just two helicopters on board, one to be used to taxi Anastasia Palliative-chook around for the news cameras.

Should be in the devastated Whitsundays next week sometime.  Sorry, no Chinooks to do the relief job properly, just wait for the rivers to subside next month.

So Navy got their “game changing” replacement amphibious assault ships HMAS Adelaide and Canberra costing $2 billion made in Cádiz in Spain instead of Australia. (Doesn’t it make ya puke!)  Both critical ships remain out of action in Sydney because of fancy bow thruster problems.

Marise Payne smiled for the press in December 2015 as HMAS Adelaide was commissioned but not ready for service.  It still isn’t, two years later! 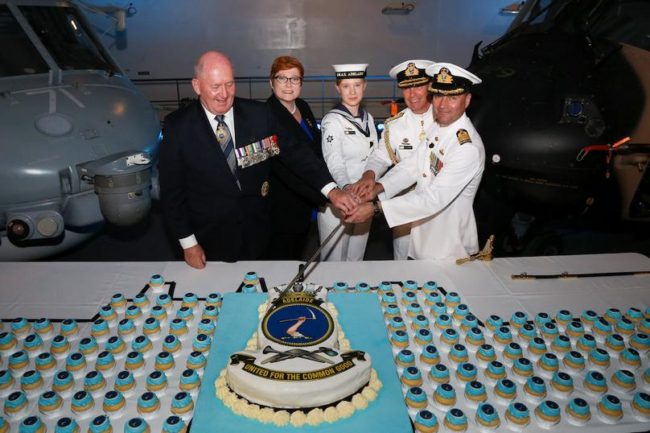 An historic wank:  Marise Payne cuts cake and eats it as HMAS Adelaide is commissioned

But what about all those yummy macaroons?

But when it comes to foreign humanitarian assistance and dodgy Malaysian planes that vanish, Australia’s military is all too ready to donate life and limb and billions.  In January, Major Payne signed a Australia-Japan Acquisition and Cross-Servicing Agreement to commit to the security of the Japanese in Japan with military support, including food, fuel, transportation, equipment and ammunition – in case Kim Jong-un goes nuclear.

So don’t expect much beyond bleeding heart, motherhood press conferences.  Polly press releases are as useless as tits on a bull.  It’s all PR to pretend they actually give a damn and know what they are doing. 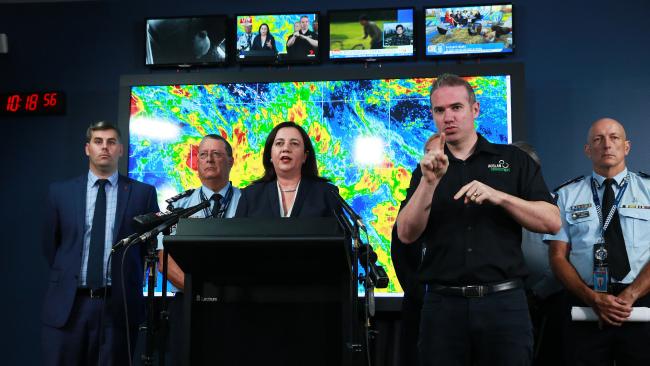 They have all their medallioned brass lined up behind them nodding for the news media.  Then comes the invariable plea for public fundraising appeal, because the pollies have other financial priorities, like more self-indulgence.

When it comes to stranded Aussies left with nothing after a cyclone in Australia, goodness gracious, she’ll be right. 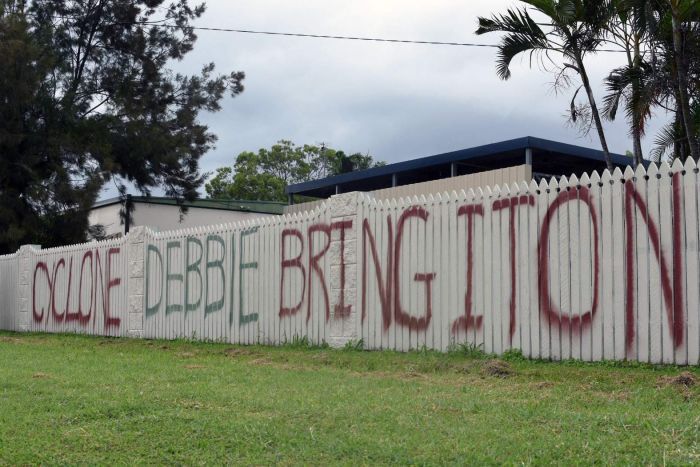 Ordinary Aussie are always on their own when it comes to relying on government in a crisis.