If you vote Liberal or Labor (LibLab), you vote for foreign ownership of Australia.

Australia’s Foreign Investment Review Board is supposed to ensure that Australian land stays in Australian hands.  But Labor says that it can permit foreign ownership of Australian property to a value of up to $244 million.  What Australian farms, any farms globally for that matter, are worth $244 million?  This cut-off trigger is ludicrously high.

Labor’s policy means that most of Australia’s agricultural land is effectively up for graps by foreigners to buy, sow and sell at cost back to the homeland and pay not tax because there is no profit.  This includes state-controlled foreign corporations like those from China and Qatar.

The Foreign Investment Review Board is a rubber stamp to foreign control. It is a betrayal to Australian sovereignty and needs to be immediately shut down.

And the Libs support the sale of Australia’s biggest cotton farm to foreigners, because corporate Libs values are about dollars not Australian rural values nor care for Australian sovereign values.

Cubby is just the tip of the foreign sell-off iceberg. As Senator Fiona Nash said the approval process was not transparent enough. ”If the sale of the largest property in the nation to a foreign interest is in the national interest, then what isn’t?”

Nationals Senate leader Barnaby Joyce, who is the local member has branded the sale a “disgrace”.  He is right and he is supported by Nationals’ federal leader Warren Truss. But Australian Party MP Bob Katter said the Nationals were shedding crocodile tears, given their record of selling land to foreign investors.

LibLabs will flog the Aussie farm for an economic buck and that is exactly what the Labs are doing now, and what the Libs will do after the Bogan Queen gets booted.  The Mad Monk is no different.

Steadily farm by farm, Australian prime agricultural land, our food bowl, is falling into foreign hands under the LibLab watch.  Labor’s Trade Minister Craig Emerson, doesn’t even keep statistics on how much land is owned by foreigners.

In Western Australia, Chinese Government owned syndicates have bought some of the state’s biggest dairy farms and appear likely to set up milk processing plants on the properties – to export at cost back to mainland China, so pay no Australian tax.

‘Tuff titties Aussies, we own you now, we get you back for Lambing Flat!‘

LibLabs have never supported rural Australia and now they are letting it go to the dogs.

The Australia First Party instead, is committed to ensuring that Australian land, including our vital farms, remain Australian.

Our Australian Government needs to respect the sovereignty of Australia’s agricultural land, its heritage and its future value to Australia’s own food production.  Australian farms represent a national resource with a crucial role to play in feeding Australians.  It is not for sale, particularly to foreigner rural raiders.

Australian and New Zealand agriculture has a competitive advantage wherein most have built up healthy export markets.  But there is growing evidence that concerns about food security overseas, particularly in Asia and the Middle East, are contributing to a surge of interest and foreign investment in Australian agribusinesses and farms.

An agricultural analyst at Citi Investment Research, Tim Mitchell, recently calculated that ”rural raiders” from overseas had spent ”well in excess of $12 billion” over the past four years on Australian agribusinesses and farms. In an interview with The Saturday Age, Mitchell concedes that $12 billion was probably an underestimate.

”There’s a lot that would have gone through to the keeper, slipped through the cracks. So there could have been at least $2 billion you could expect on top of that, but it’s probably actually likely a lot more,” he says.  His figure does not include the purchase of farms by foreign mining interests, which would have lifted the number substantially. 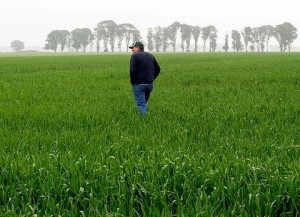 Peter Lawless on his Burramine farm. He believes the government should act to ensure Australian farms remain Australian owned.

Peter Lawless agrees.  The federal government should ban the sale of Australian farms to foreign investors if a threat to our own food supply exists.

“We should stop foreigners buying our land, for sure.  Suppose we sell one third of our land to the Chinese and we have a drought in Australia. What happens then?”