Australia’s Manufacturing Crisis, like everything else in Australian politics now, is unhappily wedged between Labor’s weakness and the Coalition’s populism.

Steel industry job losses this week were just the start of the real world pain in the non-mining economy.

Labor has tried to prepare for this crunch, but its general ineptitude left its biggest effort – the mining tax – hopelessly compromised and the rest largely unnoticed.

A Labor government traditionally would be thinking about spending some money on the problem about now, beyond the $30 million for affected regions and a bringing forward of $100 million of steel industry assistance announced this week. Not a bailout. And not spending in the misguided belief that it could substitute for long-term policies to keep Australian industry efficient and productive.

But a 45 per cent appreciation of the currency over just two years is an almighty short-term shock for exporters to try to absorb, and no one thinks this is the end of the fallout.

Some kind of targeted short-term investment allowance or tax break that might help manufacturing survive, or some kind of broader structural adjustment effort, would not seem unreasonable.

Well, it would not seem unreasonable in normal political circumstances. But this is a government under siege. And the international economic uncertainty has already put a question mark over its promise to return the budget to surplus next year, a promise Labor made the benchmark of its economic credibility.

Labor’s Treasurer, Wayne Swan, told a meeting of Labor backbenchers that the cabinet was ”prepared to use the tax system” to help manufacturers.  He mentioned the tax summit. A special cabinet taskforce has been set up to look at all policy options.

But with the Prime Minister, Julia Gillard, already signalling more spending cuts to meet the surplus promise, the cabinet has to consider the financial cost and the political cost of returning another deficit.

If Labor was faring a bit better politically, that decision might not be so hard. But its political capital is deeply, deeply in deficit.

So far it has been left talking about industry ”advocates” and global centres of excellence, and pointing to stuff it has already done, such as training programs and tougher anti-dumping rules announced in June.

Which is all very well but it sounds about as effective as a water pistol against a raging forest fire.

The manufacturing unions are not so constrained. They want the government to push harder for miners to use more local product, reasoning that the $430 billion in the investment pipeline should translate into quite a bit of local work. And they say miners should be forced to come up with local ”participation plans” before their projects are approved.

And the Liberal Party is speaking the unionists’ language. The opposition’s industry spokeswoman, Sophie Mirabella, says local companies are sick and tired of being told that anything a government might do amounts to ‘protectionism’. ”We need to reframe the economic debate,” she says.

She is preparing to do just that with policy announcements over the next couple of weeks.

In other words, the Liberal Party is preparing to continue its raid on Labor’s blue-collared heartland by outflanking the ”party of the workers” from the left.

But despite the fighting words, there are still a few things cruelling the credibility of the Liberal Party‘s new blue-collar pitch. For one, it is still promising a $500 million cut to existing automotive grants, which carmakers say would lead to the close of existing operations.

Mirabella said she was in ”detailed discussions” with the auto industry. But since the Liberal Party‘s razor gang is already looking for $70 billion in savings, Tony Abbott has not got much financial leeway either. 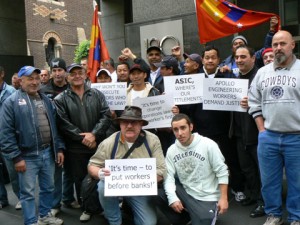 And the Liberal Party is still promising to vote against the revised mining profits tax and scrap the programs to be funded from it. Despite BHP’s $22 billion profit, the Liberal Party says the miners are paying ”more than enough tax”.

For Labor, the tragedy of their predicament is that they did see this ”manufacturing crisis” coming.

Swan explained his original $99 billion (over 10 years) resource super profits tax in May last year, on the basis that the mining boom would make it very difficult for the ”non-mining parts of the economy to retain workers and investment as they are drawn to the mining sector”.

”You may have heard of the ‘Dutch disease’ where the exploitation of natural gas in the 1970s is supposed to have ‘hollowed out’ the Dutch economy,” he said in a speech to economists.

If we had not heard of ”Dutch disease” then, we sure have now. But of course, the Rudd government’s remedy – the resource super profits tax – was smashed by a $22 million advertising campaign by angry miners, after Labor reneged on promises to consult on the details. And Rudd’s prime ministership, already weakened by the backflip on the emissions trading scheme, was smashed, too. Julia Gillard quickly negotiated a compromise with just the three biggest miners, which raised only $38.5 billion over 10 years, meaning the proposed company tax cut supposed to help the non-mining parts of the economy had to be cut from 2 per cent to 1 per cent.

And even that $38.5 billion relies on new, higher, but unpublished estimates of the volume and value of the minerals being exported. The Coalition, the Greens and the smaller miners strongly suspect the tax take from the major mining companies will be not much more than what they were paying before.

And so our hollow political debate rolls on. The compromised versus the uncompromising. As the Treasury secretary, Martin Parkinson, said this week, the economy is facing bigger problems than it has for generations. But the government is scraping to find the political capital to meet the challenge and the opposition is driven by whatever will help it blast its way to power. 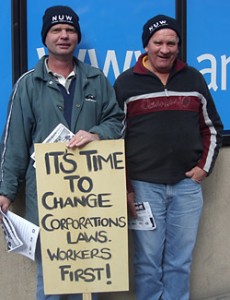