Saturday May 24 was a defeat for the extreme Left in Sydney.

Australia First Party had publicly stated we were to hold a Public Forum in the Western Sydney suburb of Doonside to protest at continued immigration and ‘refugee’ intakes.

So the usual suspects, Leftist extremists served as an entertaining and somewhat sad cliché across the street from our meeting hall.

We couldn’t resist a photo or two for the record.

They were lead by a megaphoned Ian Rintoul, a serial illegal-luv’n and Australian hater.

Australia First Party’s public meeting went without hitch thanks to our security keeping the frustrated Leftists – Anarchists -Trotskyists – Greens – careerless students mob across the street.   They only served to deliver our photo above.

Of interest, the local police presence had one or two that gave an air of undercover observation.

But an eye opener across the road from our public meeting was a very fat and obvious Greens candidate enmeshed in the Anarchist rabble behind Rintoul. It is one David Lenton, Greens candidate for Lindsay. Who could miss the big bloke behind megaphoned Rintoul?

Here’s a close up:

There is the Big Gay behind Rintoul, amongst the student Anarchists condoning threats of death.

Recognise him in a suit? 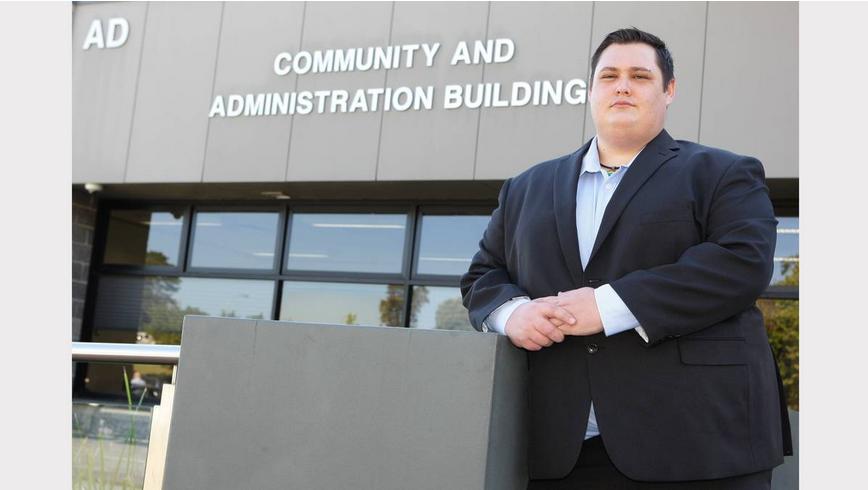 Of late, the extreme Left has made noises about opposing Australia First activities with violence. These threats have come upon the heels of an organized assault upon members of the party in Brisbane on May 2, courtesy of a thug group within the CFMEU which headed the call of the extreme Left.

We refused to be intimidated on May 24, but Rintoul’s rabble were an entertaining side show. 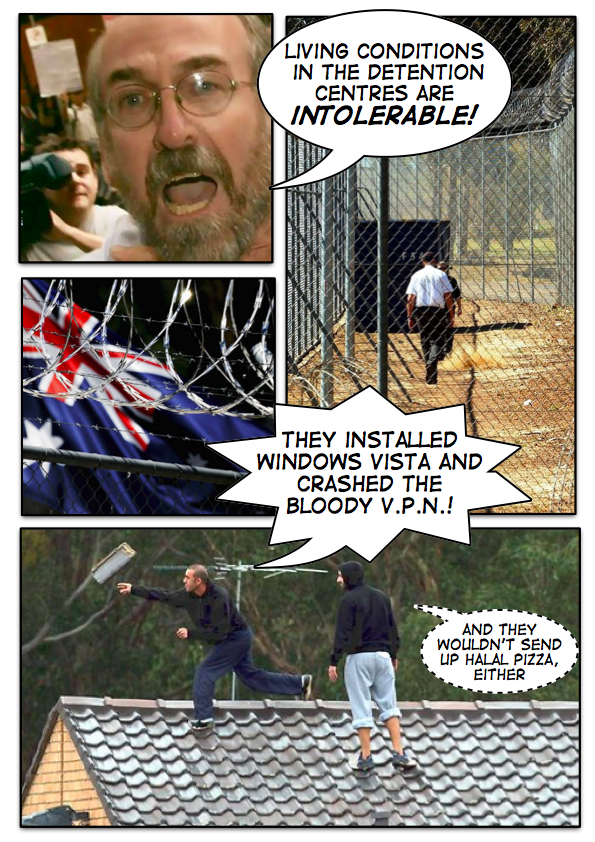 Our Doonside meeting was timely in that the Liberal government has opted to start “processing” the 22,500 asylum claimants who are “in limbo’, in detention or offshore in obscure circumstances. We expect most will gain entry to Australia and to all the benefits of the Australian welfare system and public housing. So much for ‘stopping the boats’! As we have said: they stopped the boats to fly the planes.

While pensioners, students, unemployed and others get the budget bash, these Third World aliens get the rewards.

We combined the May 24 open meeting with a State conference of the party in order to have possession of the venue hours ahead of the public phase – and the planned counter-demonstration. We long noted that it is a favourite tactic of the extreme Left to attempt occupation of venues ahead of those who plan an event there.

We took no chances on the safety of our participants.

The party thanks a number of people who volunteered to do door security.

The security group was on hand at noon when the counter-protest began. Led by the notorious ‘refugee advocate’ Ian Rintoul, a Trotskyite communist who directs the Refugee Action Coalition, the protest involved only seventeen persons. The ‘Slackbastard’ anarchist website and Facebook page had also urged confrontation. In typical lying fashion, they claimed later that Rintoul commanded a few dozen activists against us. The photograph here belies that claim.

Later, the Rintoul group was joined by a couple of locals who were, to use police parlance, “of Middle Eastern appearance.” So much for popular Doonside support.

The protestors used chants of “refugees are welcome, racists are not” which were not audible inside our hall. Why are refugees welcome? They are welcome only within the twisted world of Trotskyite communism which sees the breaking down of all borders and identities, the necessary precondition for some sort of communist revolution. There will certainly be no communist revolution, but the goal of open borders and no national identities serves the big business class in speeding its dream of the free movement of capital and labour. We wonder who is using Rintoul?

Therefore, we were amused by Rintoul giving full vent to his political genius (sic) when he insisted we were part of Tony Abbott’s war on poor folks! For our part, we considered that admitting refugees was part of the war on poor Australians.

A cynic on our megaphone couldn’t resist blaring back: “Hey Rintoul, are you going to share your four houses with the refugees? What about your mum’s big estate in Bowral?”

The extreme Left counter-protest was a flop.

An area like Doonside, with its Aussie working class and tradie base, is alien to the Newtown-type leftist who Rintoul brought with him. While we can never underestimate this type of element, we can answer their ‘mobilisations’ with organization and determination. We must always refuse to be intimidated and uphold our right to freedom of speech.

Our Forum had four speakers. Julie Head addressed on the New World Order and the logic of open borders. Mr. Iggy Gavrilides spoke of the refugee invasion of Europe. Jim Saleam explained the inter-relationship of Chinese imperialism with a new type of colonization. Lorraine Sharp concluded the day with a short talk on the impact of refugees upon the city of Wagga Wagga. All were well received.

The hall was properly decorated and served with various tables with historical material and nationalist literature.  A number of members staffed these tables and they deserve our thanks.

Several young people and people involved in other former patriotic groups passed by or attended and expressed interest in joining Australia First. A certain role for the Eureka Youth League may also emerge from contacts made amongst local youth and others.

Australia First Party in New South Wales will now increase the tempo of its public activism particularly in western Sydney. However, there can be little doubt that we will be increasingly opposed and confronted.

Rintoul’s tardy demo called out one David Lenton, self described “gay”, “feminist” and “Green” activist – and former Greens party Federal candidate for ‘Lindsay’ in 2013. Mr. Lenton is a strong supporter of the Refugee Action Coalition.

Mr. Lenton stood close by the banner ‘The Only Good Fascist Is A Dead Fascist’, carried by a couple of anarchists. We produce the photo of the banner.

This banner was a clear threat of murder. 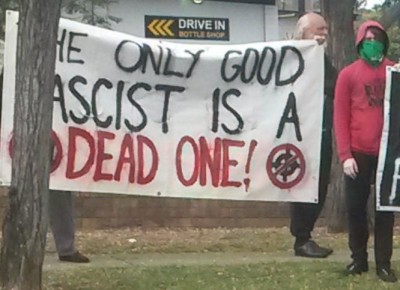 Australian Nationalism has nothing to do with Fascism, but the Leftist mob just tow the Anarchist line.  The propaganda branding is quite laughable.

Given the Anarchists have praised up the thug attack upon members of Australia First in Brisbane earlier this month and damaged the offices of our party in Sydney several times in recent months, we can only conclude that these dross would attempt more serious crimes if they could get away with them.

We are not saying that Mr. Lenton would himself desire murder or serious assault, nor are we saying that he necessarily approved of the banner. However, we are saying that he was reckless in associating the Greens party with Trotskyites and anarchists. These filth will use a Green cover when it suits them so they can engage in illegal acts with the illusion of public support. They thrive on pretending that they have some sort of mass public support for their violence and their refugee advocacy. Recently, they have supported a Unions For Refugees group as another front when Aussie workers are more likely to support the stand of Australia First.

Nonetheless, Mr. Lenton does have some form for hanging around these extreme Left elements. He was favourably interviewed by the Trotskyite communist rag ‘Green Left Weekly’ in August 2013. And he was quite happy to report on his Facebook page that he attended the counter-demonstration last Saturday. He praised the organizers, denounced us as “racist” and associated himself willingly with all the protesters. See:

We call on the Greens party to repudiate the attendance of Mr. Lenton at a  rally organized by a communist fruitcake and anarchist who call for murder.

If Mr. Lenton is endorsed as the Greens candidate for the State seat of Penrith in the New South Wales election of March 2015, he will face a candidate from Australia First.

We do not forget threats of violence.