The National Union of Students linked up with extreme socialist groups Socialist Alliance and Socialist Alternative and various hangers-on anarchists in confusion to stage a violent protest in inner Melbourne yesterday. 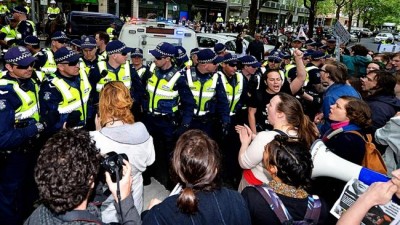 So none of the protesting students will be personally affected by the governments 2020 proposed changes to university fees.

The Leftist organisers are like the Labor Party, still in denial that Labor lost the September 2013 national election, and that Greens welfarism is coming to an end, and that Labor’s unaffordable $14 billion Gonski reform pipe dream, is to be sensibly axed by an over-indebted government.

Why did we not hear “boo” from the National Union of Students when this time last year, Gillard Labor announced it would pull $2.3 billion of national funding from universities to pay for the Gonski education splurge?

It just depends who is in power. Welfarists teat suck Labor.

And the National Union of Students allowed the protest rally to get out of hand and to descend in to violence at Melbourne’s Spring and Bourke Streets intersection near state parliament.  Mixed in with the 2000 odd university students were career protesters from extremist Left groups Socialist Alliance and Socialist Alternative, and the usual anarchist suspects including the Melbourne Anarchist Club and Antifa.

Labor’s Kate Ellis MP was one of the key rabble raisers speaking to the throng, revealing that the protest was broadly organised by the Labor Party machine. 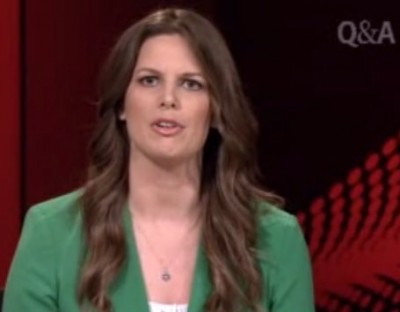 Alongside feminazi Emily’s Lister Kate Ellis MP were the Greens Adam Bandt and Sarah Hanson-Young, as well as key figures in Victoria’s union movement Jacob Grech from Trades Hall, and dial in heavies from the National Tertiary Education and Maritime unions. 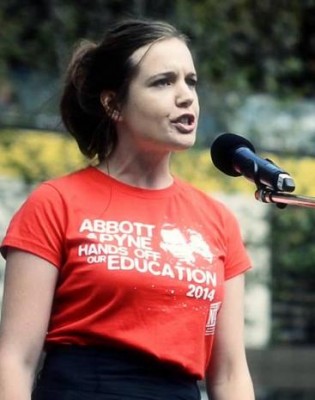 The student union even seconded female minors as young as 15 to participate the frackas.  Camberwell High School student Tallulah, 15, was arrested along with other truants from  Brighton’s Star of the Sea College , Williamstown High School and Footscray City College.    Many were carrying schoolbags and dressed in uniform and in the main were female.

Tallulah, one of @ndy’s Anarchist female slaves, does anything for Anarchists:

The protest congregated at the State Library, got revved up by the likes of Kate Ellis, then proceeded along the classic route along Exhibition Street to Spring Street to state parliament house at Bourke Street, where it took on a violent Anarchist anger. Thousands of angry protesters blocking traffic, forced the suspension of tram services for several hours, protesters clashed with police and a flare was lit and thrown into the crowd.

Victoria Police’s Inspector Paul Binyon said lash, saying protesters hadn’t kept to an agreement about how they would behave.  Thirteen protesters were arrested, but none for affray.

That the protest in Melbourne turned violent points to the usual network of extreme Leftist nutters.   Wasn’t a second female MP mobbed by angry protestors on a university campus a few days ago?

With NUS Deanna Taylor joining the confusion, there is a distinctive violent nutjob pattern emerging:

It was all a waste of time and effort.