Despite an ex-Army Liberal hard capitalist in Campbell Newman in Brisbane, 600 km into real Queensland at Rockhampton, ordinary Australians can’t find a job.

Rockhampton’s unemployment rate remains well above the national average, despite it being in the heart of the beef industry with the largest national abattoir and a mining industry booming.

The multinational mining companies are flying in their own ignoring local skills and over-inflating housing demand forcing local families to be homeless.  Six months ago Rockhampton’s unemployment reached 7.1% – nearly 2% ahead of the Australian average of 5.2%.  Elsewhere in the region Mt Morgan recorded a third world 24.8%, which is typical of many rural Queensland towns.

Meanwhile, almost 2500 foreign workers have been invited to Queensland to fill vacancies, mainly in the mining and construction industries.  The number of workers on 457 or “temporary business long stay” visas for the mining sector have grown from 560 to 1180 compared to the same period last year.

Rockhampton’s abattoir is Australia’s largest, run by JBS Australia.  But it was sold out to Brazilian owners.

This month Queensland’s Campbell Newman’s LNP Minister for Multicultural Affairs Glen Elmes has announced a $288,667 allocation for 14 projects under the Economic Participation Grants Programme for JBS to employ 30 refugees. 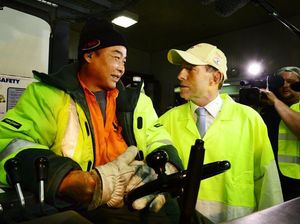 Boat illegals in their tens of thousands leftover from Gillard-Rudd no border socialism will now have more support than Rockhampton’s finest youth to employment and developing business ventures, with community groups assist them under the LNP taxpayer-funded grant for foreigners.

Campbell Newman’s Multicultural Affairs Minister Glen Elmes said he enjoyed listening to refugees’ stories about the how they came to Australia, the persecution they faced and their determination to make the most of their new opportunities.”I love nothing better than to have the opportunity to meet migrants and refugees.”

“They have that determination and that willingness to work and that absolute desire to succeed in this new country, which makes them very, very, very good employees.”

JBS plant manager Bill Sauer has celebrated that they currently employed 87 refugees
with about 20 nationalities.

“It doesn’t matter if they’re refugees settling into the country or they’re Australians wanting a career in the meat industry, we’ll look at all types of people and if the candidate fits the position we’ll seek to employ them,” he said.

But it is all about cost, labour cost, to boost profit and so executive bonus.  Two bit third world ethnics will carve up a beast for pittance compared to Australians trying to earn a decent wage to support their family.

Brazilian JBS couldn’t give a damn about local Rockhampton folk; it’s loyalty is in Brazil.

So it is no wonder Brazilian JBS preferences cheap foreigners on 457 visas to slave employ at its abattoirs across Australia because decent Australians would shamefully get more on Newstart.

“Both companies have advertised in the last month, and I have applied at Teys four
times, and twice at JBS. JBS sent me a letter saying I was unsuccessful as I did not
meet the required skill level and I rang Teys, who said they would get back to me in
two weeks if they were interested…I never heard back.”

The disgruntled 26-year-old said he was an A-rate worker with over 10 years’ experience in various departments of the meatworks, he was more than qualified for the advertised jobs.

Adding to his frustrations, Mr O’Brien’s friends working at the meatworks had told him
that jobs were being filled with 457 Visa holders.

JBS has a record of scabbing Australian workers.  In 2012 it shut down its Dinmore Plant near Brisbane to snub a modest pay rise by the Australasian Meat Industry Employees Union. 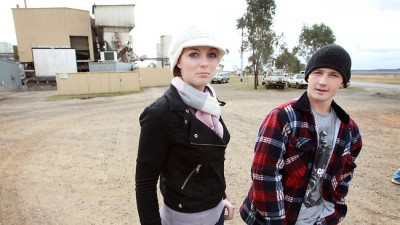 The Brazilian bastard just got promoted back to Brazil on the back of Rockhampton unemployment.

Work for a multinational and don’t expect Australian values, Australian respect or Australian standards. Expect to be shafted by the likes of a foreign employer like Iain Mars.

Not only is the meat industry sacking Australians to employ cheap foreign scabs.   It is even exploiting the scabs.  Since the Howard 457 visa system was introduced, employers have been exploiting it.

The excuse of labor shortage is a furphy.   Since at least 2006 both the Liberal and Labor national governments have been well aware of the rort, as more and more meatworks have turned to overseas labour using the 457 temporary visa program.   But temporary means up to four years, and it can be renewed.  It has become a government-sanctioned law for invasion.

The foreign scabs who are brought into Australia are in many cases being exploited, and are being abused, and not being paid correctly and being misused at work.

Wagstaff meatworks on the outskirts of Melbourne, employs only chinese workers on 457 visas at the abattoir.   The company provides dodgy housing nearby and deducts rent from their wages, so they end up with pittance.  But if they complain, they know they will be deported.

It is slavery downunder and the Department of Immigration couldn’t give a toss. 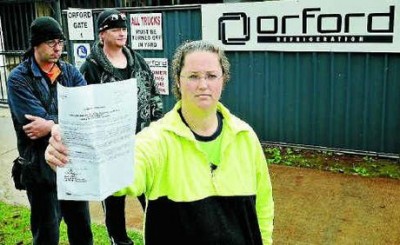 Sacked worker Melynda McArthur is still owed $42,000 in entitlements by the company.

Two weeks later Orford Group had opened a new factory in China and the owner/director Corby Orford, had the temerity to then speak at a “Turnaround Conference” in Melbourne in September 2011 to boast how her business had become a model “turnaround” business.

Scum of the Earth.

“She left workers out to dry while protecting her own assets, and then walked away without a backward look to the workers and their entitlements, leaving taxpayers to pick up the pieces.

“She has no right to be sprouting about how she turned around. Rather, she turned away her local community and workers and sent those jobs overseas.  People trusted Corby and she let everyone down. I don’t think she should be held up as a success story at conferences like (Friday’s),” she said.