The Indian prime minister’s visit to Australia this week has been an eye opener.

Ordinary Australians watching the nightly news and observing over 20,000 Indian fans passionately treating PM Narendra Modi as a rock star in Sydney would be quite dumbfounded.  Even the Australian media has contrasted how different Modi’s celebrity status amongst ex-pat Indians is to Australians’ regard for our own politicians. 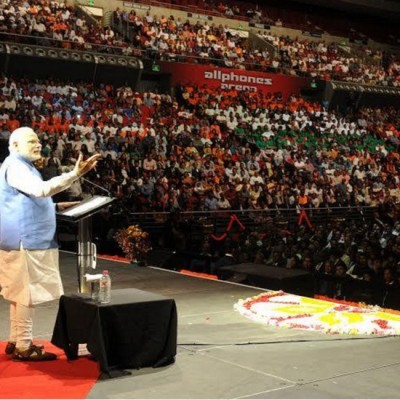 Modi at rebranded “Allphones Arena”, Sydney
Allphones is owned by the AMT Group, based in Dubai

Indians have a culture of hero-worship – in their religion, in their cricket and historically Indians rightly venerate Mahatma Gandhi who led India to independence in 1947, albeit without a vast region subsequently called Pakistan.  So Narendra Modi is following somewhat in this inspirational charismatic style.  Modi even managed to unveil a statue of Mahatma Gandhi in Brisbane after the G20.

In contrast, while Australians have had a few good leaders (Curtin, Lang), our social development has been far shorter in time and more incremental having started from a higher Western base.  Our Gough wasn’t exactly a Gandhi.

But those 20,000 Indian fans in Australia have become an eye opener to how the Indian diaspora in Australia enjoys the best of both worlds.  They exploit Australia’s open immigration and multiculturalist polices by the rotating Labor and Liberal governments – skilled English-speaking Indians continue to migrate to Australia.  Indians are more than happy to abandon their Third World India for the wealth of Australia’s First World good life.

And under Liberal/Labor joint multiculturalism, Indians are encouraged to import and retain their own culture – language, religion, values, mores, attitudes, and even their own allegiances – to Indian cricket and Modi.    So they call themselves “Indian Australians”, as distinct from “Australians”.

Australia has let in more than 400,000 Indians.  They have clustered together like birds of a feather mainly in urban Sydney, Melbourne and Brisbane – certain suburbs have become curry saturated.  Consider Harris Park, Westmead, Preston, Laverton, Clayton South, Underwood, Kuraby and Runcorn.

Indians have now eclipsed the Chinese as Australia’s most prolific immigrants.   While the traditional British are still arriving, the 1,400 million Indians (including Pakistan) and the 1,300 million Chinese considerably overshadow the potential 64 million Brits.

The Indian diaspora makes up 1.7% of the Australia’s 23 million population.  Under Labor, 2012 statistics show that permanent migration from India reached 29,018,or 15.7 per cent of Australia’s total immigration programme. 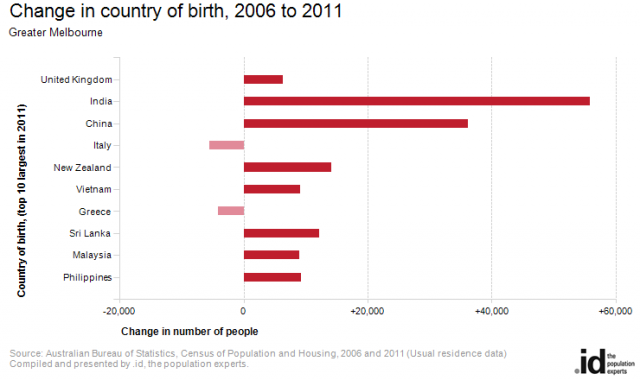 Most have arrived as students, encouraged by Labor/Liberal policy inviting cashed up foreign students to take tertiary places in Australian universities.  Upon qualification the foreign students are handed 457 visas to stay and then take up Australian jobs.

India has 500 million people under 25, many skilled and wanting to emigrate to First World countries like Australia.   Their migrant numbers are increasing in Australia.

So last Monday November 17, over 20,000 expat Indians living in mainly Sydney and Melbourne went to listen to India’s new prime minister, Narendra Modi, speak at Olympic Park in Sydney.  They are infatuated with Modi, their messiah.

Modi arrived in Australia for the G20 Summit last weekend and to promote Indian trade with Australia.  Understandably, Modi is in Australia to promote tourism in India and to invite foreign investment in India.  Why wouldn’t he?

A passionate Indian nationalist, Modi won a landslide election victory in the Indian national elections in May.  He is highly popular with many Indians and has become well-regarded for his oratory, spruiking the opportunities and his promises for ordinary Indians.  Modi is the first Indian Prime Minister to visit Australia in 28 years, so it was to be expected that his presence was seen as a rare occasion.

Yesterday, Modi addressed Australia’s Federal Parliament encouraging Australia to become as a major trade partner with India.  Why wouldn’t he?   Australia’s Abbott Liberal government is keen to sign a tariff-free trade pact with India in coming months, especially in the energy market.  Like Labor, the Liberals will flog Australian wealth for any price.

Modi is rightly promoting foreign investment opportunities in India to help India progress out of Third World poverty and to raise the hopes of Indian people. Good on him for doing so.  He did the same thing in New York in September.

So Modi has generated huge excitement in Australia’s fast-growing, Indian-born community.   He has promised all Indians in India will get a bank account, clean water and flushing toilets connected to sewage, which is about time for Indians in India. On this score Modi is following Whitlam’s 1972 National Sewerage Programme forty years hence.

Modi has even promised to clean the Ganges River.  That is probably overdue too.  The outgoing Indian prime minister made promises too like rural welfare.   Modi has five years to prove himself to Indians in India.

But for expat Indians in Australia, they already enjoy Australia’s wealth and lifestyle hard-fought for by generations of Australians before them.  Indians now enjoying the fruits of Australia perhaps some may engage with Modi’s Indian-Australian trade.

But many will not benefit from Modi’s plans for India because they are in Australia.  Their Modi infatuation is pure romanticising of memories of old mother India.  They call themselves “Indian Australians” because they can now live and work in Australia, but at the same time live as Indians – speak Hindi, mix with Indians, practice Hinduism, eat Indian food, dress as Indians, and perpetuate Indian customs. 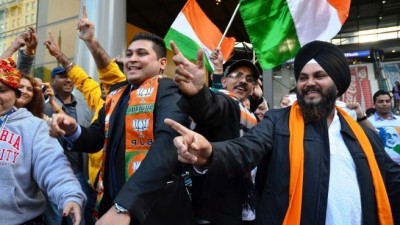 Indians being Indian in Australia, the lucky country

Indian Australians are having their cake and eating it too.  They really don’t care what happens in India, for if they did they would return to help their own. They fabricate their own hybrid racial identity, calling themselves “Indian Australians”, and reminisce mother India on social occasions.

The ones that are here are selfish.  Many want more of their families to join them in Australia.  Many are racists towards supporting their own kind ahead of traditional Australians – especially in work opportunities. Look at where an Indian has become a manager in Australia and you will find Indian staff working under that Indian manager. 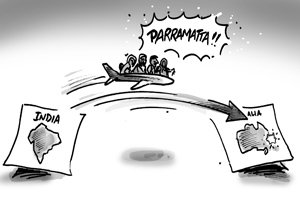