As the Australia First Party candidate for ‘Cook’ (Sutherland Shire) in the Federal
poll in 2013, I await the personal attacks and smears.

I have a task. It is to cost Liberal Party Shadow Immigration Minister Scott Morrison – his seat. Things will get dirty and my ‘character’ (sic) will (must!) be put to the test.

But one odd thing keeps popping up – my detractors over many years mostly have feet
of clay and one by one they fall over. The latest is quite significant.

One of my vociferous ‘enemies’, Eric Roozendaal, former Labor Party Treasurer of New
South Wales and upper-house MP, is one of the latest to be toppled. Why? Because Eric, after having been on my case for 28 plus years – is now likely to end up in gaol.

And how sweet it is! 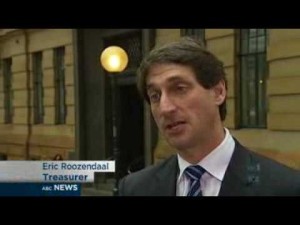 In 2006, when Eric took his seat in the Legislative Council of New South Wales, he cited me and National Action, an organisation I chaired in the 1980’s, in part of his CV. As a brave anti-racist (sic), Eric asserted that he had stood up to me and mine. He was proud. And he wanted the world to know. He told the newspapers and the House. How flattering!

But let’s get back to the trouble Eric is stewing in precisely as I write.

The NSW Independent Commission Against Corruption (ICAC) has commenced hearings into elaborate frauds and the misuse of public office by a legion of Labor Party identities, including – Mr. Roozendaal. It seems that Eric received a heavily discounted vehicle for favours and is involved in a number of other corrupt dealings including mining licenses. The corrupt conduct weaves through the Labor hierarchy with Eric right in there with his political mates.

As the story unfolds and the corrupt web is revealed in stark detail, I think the voters of Cook can still imbibe a little more sauce, but this time at the level of how some would-be leaders operate to manufacture their ‘credibility’ at the expense of others.

In the Australian Jewish News of January 5 2006, and. in response to the re-emergence of the Australia First Party in this State just after the Civil Uprising at Cronulla, Eric let rip with his usual well-choreographed invective aimed at me. He said: I don’t think he has any contribution to make to a democratic country like Australia.”

I am flattered again. But was Eric just up to tricks? Perhaps profiting from power is the very meaning of the thing called democracy?

Well, Eric and I have a place in history drawn from a confrontation at Macquarie University in March 1984, when he served as president of the student union. Eric’s account of our ‘meeting’ – and its sequel – was clearly  part of his self-image . I might even say, it was an incident defining of his psychology.

And it’s a ripper yarn.

In mid-March 1984, a liberal journalist from SBS TV, Marti Georgieff, had arranged
with me to film National Action members running a literature stand at the University of New South Wales. She wanted to discuss the overseas student program which rorted then (as it rorts now) Australians of an education.

Good intelligence revealed that Ms. Georgieff had conspired with Steve Black of the Builders’ Labourers Federation for a confrontation between our members and six of his heavies. When we phoned Ms. Georgieff and told her we were heading to Macquarie University.

Instead, the lady was most distraught – obviously because the thugs could not be ‘re-directed’ in time, so she phoned Eric Roozendaal.

When we set up at Macquarie Uni, Eric appeared, and with the camera rolling, he made a big scene of tipping the table over. National Action lads set up the table again and intervened in his way to forestall another such action. The hero stepped forward to harangue me about ‘racism’. Needless to say, I told Eric he was a good actor. SBS had its required confrontation between the light and the dark – except it wasn’t a wild punch-up. The day ended.

Well, National Action didn’t like bulldust of any sort and considered that we had to
reappear at Macquarie Uni the following week. So, on March 21, a dozen members fronted and set up the table and distributed material to the great interest of the students and with visible support against the overseas student program.

Three members entered the student building looking to photograph our anti-racist hero. Eric wasn’t there. On the way out, one of the blokes up-tipped a file on the reception table. So what? After an hour or so of ordinary political work elsewhere, we all decamped.

That night, the television news reported our storming of the student union offices.
And lo and behold, one file of papers upon the floor had become an office ransacking with the contents of entire filing cabinets strewn about and property damaged.  Eric was a hero of the anti-racist struggle. The Vice Chancellor of Macquarie University, Di Yerbury, banned National Action from the campus, the first ban on a political organisation since
the bad days of 1950’s communism.

My question has always been: who dirtied-up Eric’s office?

One might want to think bad things about this former party hack appointed to parliament and now implied crook who stands before the ICAC.  However, let’s
be a little bit fair – the student union was populated by all sorts of anti-racist
totalitarians, who could see a good opportunity and they may well have acted upon it.

At least, Eric’s CV should be rewritten. First up, the hero wasn’t a hero when he confronted me. He was an actor with a TV camera filming everything. A gentle clip to Eric’s ear to restrain his over-enthusiasm would have become an act of fascist barbarity – which we could all have done without. So, we put up with his theatrical performance. I suspect that before the ICAC, this actor just ran out of pizzaz.

Nonetheless, given Eric’s new ‘revealed character’ at the ICAC, is there the other
option?  That Eric was complicit in the ransack of his own office? That he built up his credentials in a way that could not be successfully repudiated by me?

It is my word against either Eric Roozendaal or the unknown rabble in the student
union that we did not behave as thugs. However, Eric’s character now smells which it really didn’t before.

Could the jury of public opinion decide that he’s just a little system grub?

The legend of the Macquarie University Student Union office ransack has followed me about for many years. It was just one more thing to be put on the table by the professional ‘anti racists’ who follow me about.

It’s great news that the voters of Cook they are now able to see one detractor for
what he was – and is!