Is this the thin edge of the Gillard’s ‘Asian Century’ wedge?  The Foreign Labor Party has been approving the sale of Australian property to Chinese state-owned corporations since it lied to the electorate to snatch power.  The Chinese are strategically acquiring vast chunks of Australia’s limited prime agricutural land to feed only its own.

It amounts simply to ‘Government Sellout to Foreigners‘.

Foreign Labor, and the Libs before them, have already sold out Australian manufacturing to the Chinese and other foreign corporates.    Now they’re selling out our valuable land to foreign owenership and control, particularly to Chinese Government sovereignty. Is this not invasion?

Here are the facts:

This is Australia’s wealth, built up over generations by Australians, now allowed to be flogged off to opportunistic cashed up foreign interests.  Selling the farm is permanent, just like immigration.

Chinese state-owned Beidahuang Group continues to ‘snap up’ vast parcels of Australia’s prime agricultural land in the south of Western Australia as part of a Chinese national strategy to build a supply chain direct from WA farms 100% to feed its own Chinese food bowl.  It will export from Albany and due to our weak tax laws will pay little if any tax to the WA or Australian LibLab governments.

Kelvin Thompson MP is concerned but he is a lonely voice in Labor’s political wilderness.

He says that in 2010-11 the FIRB approved 10,293 applications and rejected just 43. As a result the amount of Australian land in foreign ownership has doubled in the past 25 years – from 5.9 percent to 11.3 percent, according to a report by the Australian Bureau of Agricultural and Resource Economics and Sciences.

The report by the Australian Bureau of Agricultural and Resource Economics and Sciences reveals how deregulation of agribusiness has ‘stimulated’ foreign investment, resulting in foreign takeovers of agricultural co-operatives traditionally owned by local Australian farmers. 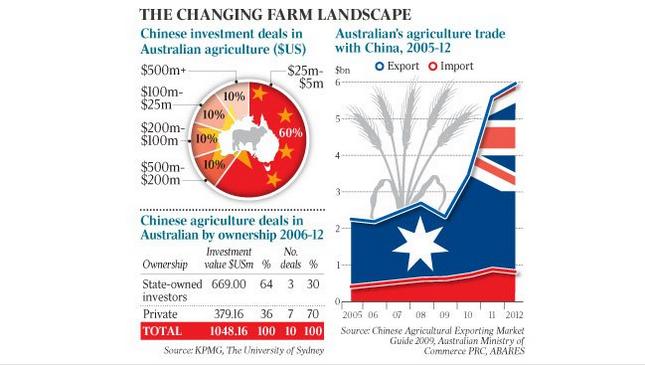 In Queensland foreign land ownership has quadrupled in the past five years to 4.4 million hectares. Mining companies accounted for 60 per cent of all foreign investment in Queensland farmland during 2010. In the Northern Territory, over 14 million hectares, an area larger than the State of Victoria, is foreign owned. Over 30 percent of Western Australia’s water entitlements for agriculture are overseas owned. On December 30, last year Wesfarmers sold its Premier Coal business to a Chinese company, leaving all coal mines supplying the WA electricity grid in foreign hands.

And if it’s foreign owned, the profits leave Australia, and profits are incremental wealth.

The FIRB doesn’t have a clue how much of Australia is in foreign hands.  There is no register.  No-one has a clue how much agricultural production leaves Australia not as an export sale, but as a multinational internal transfer, and without paying tax.

And many food brands in Australia are now foreign owned.  Brisbane-based Golden Circle has has been selling products marked “proudly Australian owned” more than a year after it was bought by US food giant Heinz.

Home grown food producer Dick Smith says: “It’s the great disappearing act. Our skills, machinery, companies, products, homes and significant parts of our land are being sold off at a rapid rate. Most people prefer to buy Australian, but it’s often impossible to tell dinky-di goods from imported ones because our government allows confusing labelling.”

Not only is Australia selling the farm, but losing future agricultural incomes and losing future tax income in the process.   It is a complete and utter sell out of Australia.  Yet domestic ownership and control of our agricultural assets is crucial to ensuring our long-term food security.

China is securing its future food supply for its billions. It isn’t stupid.  Australia is. 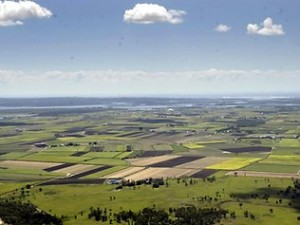 The LibLabs only see the short term cash reaped while China acquires vast tracts of our limited arable land in northern Australia for its own farming ends.  This takeover is denying future generations of Australians their sovereign access rights to affordable, quality home grown pasture, hard toiled by past generations.

Instead, LibLabs are steadily driving Australia to become a depdendent nation of imports.  One would be surprised if the Chinese end up selling their Australian-grown produce back to us at a profit.

Try buying Chinese agricultural land and see how far you get!

Nationals Senator, Barnaby Joyce, has been rightly arguing for Australia to have tougher restrictions on foreign ownership of Australian land.  It’s a no brainer.

Yet the Libs are in bed with the Labs.  To them free trade idealism somehow is more important than our national food security.

While the move by the Chinese was “astute”, Nationals Senator Joyce said it exposed the lack of planning for our own food security since Australia was now a net importer of food – and the resulting inflation had an impact on food prices. “It’s not that you’ll run out of food; it’s the form of food that you’ll be able to buy, and that is happening right now. How often do you see people now who in the past bought the roast, now by mince? Why? Because they can’t afford the roast, but that was once a staple.”

Australia does not need foreigners.  Australians don’t need to kowtow to any other nation. We have the size, land, resources, know-how and work ethic to make the 21st Century the ‘Australian Century‘, not the backward Asian Century.  Australian is a leading Western light of quality and best practice in our region.  It is for others to catch up and aspire to the standards we have set.  We have built the lucky country. That is why the world is flocking to our door.

Our problem lies entirely with naive utopian LibLab governments that continues to ignore Australians on the land and shop floor and instead kowtow to foreigners, big business, and Leftiust muffins,  selling out Australian agriculture and manufacturing. 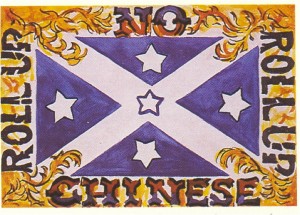 Chinese, Remember Lambing Flat!
The reason for our fight has not gone away, it has returned.

And don’t listen to the big corporate end of town.  Chris Berg and his ‘libertarians’ would have us believe that free markets, free trade and no regulation and no government will let everyone freely trade happily in perfect competition.

Coles and Woolies would welcome this as would all the big multinationals.  So-called ‘free trade’ has seen their duopoly dominance squeeze farmers on price to the wall and LibLab governments have just sat back and watched from their Canberran ivory tower.

Cheap Asian imports having been dumped on us and we simply cannot compete on price when Third World wages are Gine Rihehart’s $2 a day.   But a level playing field is when foreign producers have to equally comply with Australia’s Western workplace standards, conditions and Australian regulations.  LibLabs, Greens and Libertarians conveniently ignore this.

Australian workplaces don’t see 112 workers die in a factory fire because management locked the escape, like just happened just last week at Tazreen Fashions factory, in Bangladesh.  No wonder multi-nationals have frothed at the offshoring lure, setting up operations in sweatshop cities like Dhaka, so they only have to pay two bob wages and can unfairly compete by avoiding OH&S costs.

Free trade is about survival of the fittest.  It is dog eat dog and the corporate dogs are rabid.   Small businesses always get eaten up by the big corporates, the foreign consortiums and multi-nationals.  Look at what Westfield does to a business community when it sets up its shopping mall.  The town high street and its small shops all die a death.

But then Chris Berg and his innocuously names ‘Institute of Public Affairs’ is all about letting big business have its way.  That is why Berg quotes the Lowy Institute for his statistics – Jewish Frank Lowy owns Westfield.  Berg sees nothing wrong with foreign ownership and control, so where do the profits go? – offshore.  When decisions are made by the foreign owners, in whose interests are they made – the good of the Australia nation? No foreign control suits foreign interests.    Funny that, but Australian farmers are not laughing.

The self-serving Institute of Public Affairs calls it ‘international liberalism’. Others call it globalism and OneWorldism.  We call it selling the farm and look at where is had got us – beholden to the multinationals, beholden to the greedy Jewish gamblers on Wall Street who are heading toward the fiscal cliff because of the Jewish bankers’ excesses.

Such mangled thoughts shows he has no care about the genuine concerns of ordinary Australians.  He needs to get out of his corporate tower more.

His boss at the ‘Institute’, John Roskam, a Liberal Party contender states: “The Liberals could have been as liberal as the Greens…”

The OneWorldists are united – the Leftist Greens would have Third World illegals flood Australia on scab bridging visas.  The Corporates would get their cheap $2 a day contract labour and achieve their dream of monopolistic guilds funding aristocracy, just like the dark Dickensian time of the English Linen Mills.

Selling the farm is the last desperate betrayal ahead of feudal industrialisation of locals. 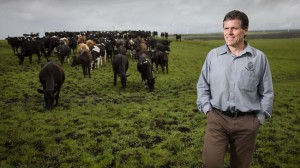