by Caroline Haskins, December 15 in 2018 on the ‘Motherboard!’ website – a subsidiary political online magazine of Vice Media LLC.  based in Montreal in Canada.

(Hood: Australia First Party notes that Vice Media is a leftist media propagator founded by Suroosh Alvi, a Shia Muslim born in Toronto, Ontario to Pakistani parents.  While we don’t support Vice Media, muslims or leftist propaganda, the article below by Caroline Haskins seems to be a fair review of current protest events in Paris. We added the images.)

‘The French Yellow Vests protests, which were ignited by an European Union fuel tax, highlight the fact that climate policies ignore the material concerns of the working class.

Over the past several weeks, grassroots protests have been sweeping through France, resulting in the worst rioting the country has seen in decades and more than 1,700 arrests.

The Yellow Vest protesters (in French ‘les Gilets Jaunes‘), as they’ve come to be known, are an essentially decentralized movement, united only by wearing fluorescent yellow vests that French drivers are required to keep in their cars. 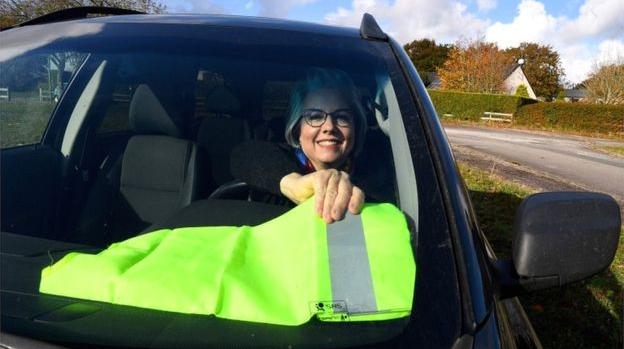 A Change.org petition helped ignite the demonstrations when it demanded President Emmanuel Macron to lower fuel prices and stop a proposed fuel tax. The fuel tax was designed to help meet the terms of the United (Third World) Nations’  Paris Climate Accord, from which America has unofficially withdrawn (Hood: And which Australia should follow its nationalist wisdom).

This inciting incident prompted media outlets to characterize the Yellow Vest demonstrations as “fuel protests,” which suggests that people are taking to the street for sole purpose of demanding lower fuel prices or are generally against “saving the planet.” But it’s not as simple as a fuel protest, and these are not “anti-environment” protests.

The Yellow Vest protesters are demonstrating against a neoliberal system in which the only way politicians try to help society—by, say, mitigating the effects of climate change—is through taxing the poor. When these taxes get enacted, they do what they’re designed to do: hurt low-income individuals. The ruling class uses these failures as evidence that any tax for a good cause is not worth it.

But taxing the poor to save the climate is a self-fulfilling prophecy that is destined to fail, because it uses the same neoliberal logic that created global climate change in the first place. The solution is simple: tax the rich, not the poor.

The characterization of the Yellow Vest movement as being either pro- or anti-environment is inaccurate. On November 23, certain Yellow Vest protesters requested hydrogen alternatives to gasoline and diesel vehicles, as well as better maintenance of public transit in rural areas. Environmentalists have claimed that the Yellow Vests protests are actually about “green piety,” or socially and economically just forms of environmental policy.

Then, certain Yellow Vest protesters conducted a survey released November 28 which explicitly asks the government to end taxes on energy product consumption and carbon use, end initiatives to promote biofuel and electric vehicles, and of course, halt the tax on diesel fuel.

For this reason, it would be fundamentally incorrect to characterize the protests as a green or environmental protest, or even an anti-environment protest. It’s a fight for survival. 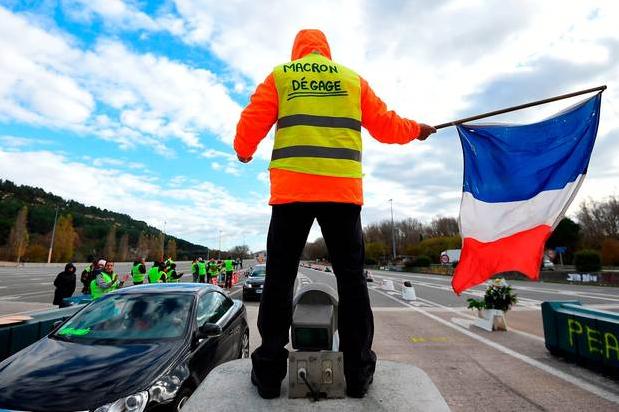 The list of demands released November 28 includes a reduction on all taxes, an increase for social programs like social security and student financial assistance, the creation of a citizens’ assembly and the suppression of the Senate (a house of indirectly elected French officials), and bolstering the benefits for people with disabilities, among other proposals.

That’s why protesters weren’t satisfied when President Macron simply put off implementing the fuel tax for six months. It’s also why they weren’t satisfied with an increase in the minimum wage, announced by Macron on Tuesday. The frustration in France runs much deeper than a single economic policy, or a single tax. It’s about material concerns like having enough money to feed your family, pay your rent, and survive.

Although the Yellow Vest protests aren’t singularly rooted in environmental and ecological policies, there’s a reason why a fuel tax specifically ushered people into the streets.

This is EU Paris. No wonder the British voted for Brexit

The policies designed to combat the leftist climate change hoax campaign are designed to weaken long-term, or future, material concerns about climate change—meaning damage from disasters like hurricanes, flooding, water scarcity, and desertification. Weakening any of these disasters will help the world’s most vulnerable, meaning low-income populations and people of color, and future generations. However, these climate policies often come at the cost of immediate material concerns—in other words, the things that affect people’s livelihoods directly and in the present.

But long-term climate protection doesn’t need to come at a short-term cost. And when it does, people justifiably get angry.

“Some political scientists have described green parties and environmental movements as post-materialist—they developed to represent people for whom material survival was no longer a dominant concern, such as middle class, university-educated people,” Kimberly Morgan, a professor of political science at George Washington University, told Motherboard in an email. “The yellow vest movement appears to be a movement of people primarily animated by material concerns: by unemployment, stagnant wages, lack of economic opportunities.”

These material concerns are exacerbated by a global capitalist economy in which the only imaginable way to make changes in a society is to tax the poor and concede to the rich ruling class. According to the protesters, many of these frustrations are embodied by Macron, who has been dubbed “the president of the rich.”

“It’s really not about the environment or fuel, it’s really about the fact that people don’t like Macron,” Harvey Feigenbaum, a professor of political science at George Washington University, told Motherboard in a phone call. “They see him as arrogant, as not listening to the people, as essentially abusing his mandate.”

This is a problem with climate negotiations generally: the policies that are supposed to mitigate damage in the present and future and protect the world’s most vulnerable are negotiated by people who are largely immune to the short-term material concerns of living paycheck-to-paycheck, and the long-term material concerns of climate change are purely theoretical to them, given their economic status. That’s why the policies that end up coming into practice don’t consider the urgency and immediacy of the material, life-and-death concerns of the working class. The working class is asked to sacrifice now, and upper classes, meanwhile, are rarely asked to make many material sacrifices at all.

“By making it about taxing the rich rather than taxing everybody that uses carbon… you are able to harness a much more popular and populist economic platform that’s based not on taxing people, but on delivering things that people need”

However, all sides of the American political spectrum have tried to apply the frustrations of the protesters to their own politics. Socialist magazine Jacobin published an endorsement titled “We’re With the Rebels.” Similarly, libertarian magazine Reason published “France’s High Taxes Breed a Populist Revolt, Again,” arguing that if France had implemented low-tax, libertarian policies, the protests wouldn’t have happened.

But the reductions on taxes and improved social programs demanded by Yellow Vest protesters don’t fall into American notions of “left” or “right”: these proposals are symptoms of the failures of a global capitalist economy.

“So when we propose these policies that have the words ‘taxes’ in them and ‘fees,’ and talk about internalizing costs into the market, we just fall into that Right-Wing trap that argues that that’s exactly what we’re trying to do.”

(Hood:  ‘Right-Wing’ is establishment conservatism including globalist neo-liberalism.  It is the antithesis of nationalism.)

For instance, Macron’s proposed fuel tax hikes stand to primarily affect working class rural communities who depend on cars to get to work. Meanwhile, politicians such as Macron don’t have immediate or long-term material concerns. For this reason, the ruling class has the privilege of seeing climate change policies as post-material abstraction. It’s a game, and the only stakes are preserving the assets of the ruling class under the guise of “saving the planet.” (To be clear, we do need to mitigate the effects of climate change. But it is becoming increasingly clear that this will require a complete rethinking of the capitalist economy that has enshrined people liked Macron.)

“The orientation of him being towards free market is especially because he got rid of a wealth tax when he first came in, because he saw it has inhibiting investment,” Feigenbaum said, “pissed off a lot of people in France, who began to see him as a president for the rich and not for everybody else. So the fact that he then introduces this oil and gasoline tax, which affects poor and rural people disproportionately, fits with this narrative of a president that’s out of touch and is mainly sympathetic to the problems of the rich.”

Of course, climate change is not a “post-material” concern, since working class, low-income, and marginalized communities are vulnerable to suffering the material consequences from climate change, and people realize this. A Libération petition signed by over three hundred French social and environmental activists directly calls for a reconstruction of environmental policies in a way that targets and taxes the rich, not working class and low-income communities.

“More broadly, the neoliberal policies implemented [are] at stake,” a translated version of the petition reads. “At a time when the global warming is urgent, this movement also emphasizes the link between the social and environmental issues: the biggest polluters are free from any effort, the main causes of global warming are not dealt with, the breakdown of public services and local shops and urban sprawl continues, alternatives to public transport are not developed.”

So, how exactly, do we move away from a neoliberal approach to climate policies? After all, according to a recent IPCC report, we have about 12 years to fundamentally restructure the way we produce energy and consume resources if we have any hope of avoiding the very worst consequences of climate change. According to Huber, the solution is largely to just tax the people who actually have money to fund public resources—or, as he put it, “we should not tax molecules, we should tax the rich.”

“By making it about taxing the rich rather than taxing everybody that uses carbon, which is essentially everyone, you are able to harness a much more popular and populist economic platform that’s based not on taxing people, but on delivering things that people need—like jobs, like cheaper and more reliable electricity and energy,” Huber told Motherboard. “A real leftist climate platform would be about transforming those systems that not only green the environment and lessen emissions, but also improve people’s access to things that they need, and improve their material conditions of access.”

It is possible to make climate policies that protect the livelihoods of working class and low-income populations, both on a short-term and long-term basis. But it doesn’t seem like the French government is considering taxing the rich in order to make this happen.

The French government has urged Yellow Vests protesters to stop protesting in the wake of a recent terror attack, but the demonstrations are likely to continue. And similar policies that harm the working class and leave the rich relatively untouched are likely to be similarly rejected—in France and around the world.’

Watch the Yellow Vest protests in the exclusive retail heart of Paris during the Christmas shopping peak of 2018 – French nationalists.