Today, Gladys Berejiklian quit as New South Wales Premier. Of course, it was her relationship with corrupt Riverina politician, Daryl Maguire, which brought her down.

The revelation that some three years ago Maguire had solicited a large bribe from Sydney developers certainly set off this present chain of events bringing him – and now her – well within the gaze of the State anti-corruption commission.

However, the formal investigation into Maguire had a causal link to a campaign of mass exposure conducted by nationalists who set out to ‘damage’ this fraudster and his local regime of financial and political manipulation, a crooked system which some locals have called – ‘Riverina racketeering’. It was a step-by-step campaign and it is more than reasonable to say that without it, there would never have been a public inquiry.

Australia First initially encountered the ‘Member for Wagga Wagga’ at the time of the ‘China Trade Centre’ affair (2012 – 2013). A struggle had begun over this billion-dollar centre planned for the city. This scheme had drawn in the usual local powerbrokers who were all anxious to profit. By garnering wide community opposition Australia First ultimately stymied the project.

The community contacts collected then continued to tip-off Australia First to other questionable goings-on throughout Riverina. Consequently, the party set out to shed light on local corruption.

The party fought a Councils’ campaign in 2016 in Wagga Wagga which involved the exposure of political corruption and it ran a campaign in the adjacent State electorate of Cootamundra on the same subject in 2017 and again in 2019. Thousands were awakened to the nexus of Liberal-National politicians, Chinese business dealings and local would-be collaborators. It earned the fury of Maguire and bent ‘police’ in Wagga Wagga made things difficult for local activists.

Finally, after a tip-off from a close confidant of Maguire, the party’s campaign was led to a lone farmer in Narrandera who had been asset-stripped of his farm and other family properties. He is estimated to be out of pocket today by some $7,000,000. Maguire’s hand figured in this affair and his activity seems connected to an effort to acquire land adjacent to Narrandera Airport.

The players in this fraud were a rogues’ gallery – money lenders, lawyers, public officials, ‘liquidators’ and shady front men – and they wanted to lay their hands on land needed to expand the airport for ‘export’ purposes. One of Maguire’s shifty Chinese business partners featured in the scheme at one stage. Today, the current ‘owners’ of the land await the large-scale expansion of the airport to make their ‘killing’.

The party has alerted the Independent Commission Against Corruption to the airport matter. Of course, local police at Griffith Detectives rejected taking any action. That was expected. Either it’s too big or too dangerous!

However, as with every issue of public importance, the key to a moral and lawful outcome is never rely on state agencies of any sort. The essential weapon is community action. If a multi-million-dollar fraud is to be undone, all state agencies must be brought under people’s scrutiny and then subjected to a campaign that demands action. Maguire’s racketeering flourished in the dark and right now in Riverina, the light is shining too brightly.

Australia First is pledged to undo Maguire’s greatest fraud: the Narrandera Airport affair. And it is only a matter of time. The day of cover-up and denial is squarely over. 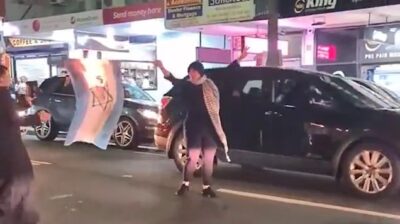