Another week, another outburst of Fethnic violence in ghettoed South West Sydney.

Last Wednesday, an entire adult Arab family in the now Muslim ghetto of Bankstown (South West Sydney) started brawling and attacking police. It was Boxing Day of all days, but it would appear Muslims have no respect for the Christian calendar.

The Arabic Mehanna family (full-blown Muslims) appeared in court on Thursday charged in relation to a brawl with police who were responding to reports of a domestic dispute.

At the Mehanna family’s home in Bankstown, one of the family punched a police constable in the face before other family members joined in attacking the police on Boxing Day.  A further six police officers called to the house were also injured, three of which had to be later taken to hospital.

This is unacceptable in Australia, in any civilised Western society.  This is the unacceptable face of multiculturalism, where Immigration lack of character screening and lack of background testing continues to allow foreign thugs to enter Australian society, set up in monocultural ghettos and continue their criminality.

Mehanna has a history of police assault charges and a record five for breach of bail conditions.  “He is no stranger to the criminal justice system. Police were simply doing their job,” police prosecutor Carlos Haralovic told the court.

Mehanna even argued with the judge.  He and his Arab ethnics have no respect for Australia law or our police force.

Why is the entire violent family not simply auto-deported under proper Australian residency conditions?

Put their possessions in a shipping container and escort the entire violent Mehanna family back on the next Etihad flight to their Arab country from whence they came.  Sell their house and rent it out to an Australian family in need.  It might start reversing the LibLab  ‘ghettofication‘ of poor Bankstown.

When is Australia’s antiquated Migration Act 1958 and NSW Crimes Act 1900 going to be fixed to prevent unwanted foreign criminals from further contaminating and dumbing down Australian society?

Immigration Minister Chris Bowen keeps letting in these violent Arabs in to our country and look what happens?  Week on week Fethnic violence – drive-by shootings, home invasions, gang violence – all introduced to urban Australia by the Fethnic element and costing us all dearly.

The 2012 Muslim Riots in Sydney were representative of the crisis in Australia’s failed multiculturalism experiment.  They are, as NSW Premier Barry O’Farrell has said, the unacceptable face of Australian multiculturalism.  Certain known aggressive and patriarchal cultures, diametrically foreign to Australian society, harber ingrained viciousness of their distant, homeland conflict, and deep-seated disrespected for legal authority, and oppression of women.  Such unAustralian ethnicities – Arabs, Africans, Pacific Islanders – have no place in Australian liberal Western society.

When will the LibLabs change the laws to respect the peaceful rights of ordinary Australian against these Fethnic law breakers?

Next Etihad flight out back to the Middle East! 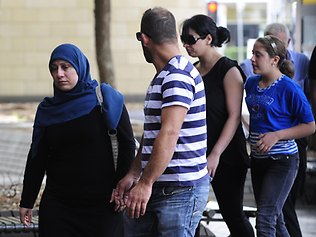