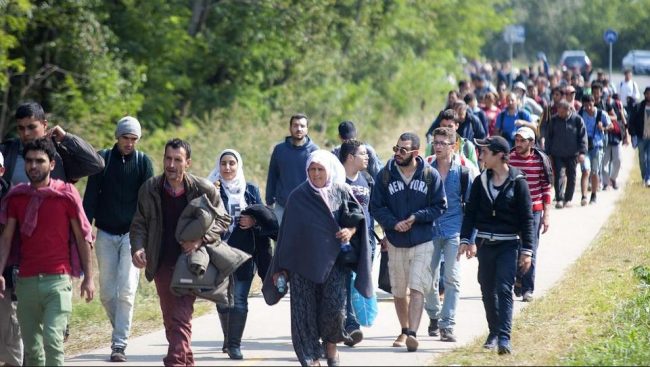 There goes the neighbourhood in Fairfield; the traitor council is set to rename it ‘Aleppo’.  Mayor Frankie Carbone is bringing them in by the plane load.  It’s rehearsal beach head invasion for Badgery’s Third World Immigration Airport – ‘Baklava International‘.

On top of the annual leftist invasion of 13,750 fake refugees imposed on Australians every year, treacherous Tony Abbott piled on another 12,000 Arabs from Syria in September 2015.  It’s all UN-inspired and conspired.

It’s more billions of our taxpayer wealth gifted by Canberra to hateful Arab muzzies in our midst.  Half have taken over South West Sydney, now where most residents speak Arabic more than English, and where every month another normal school is being converted to islamic. 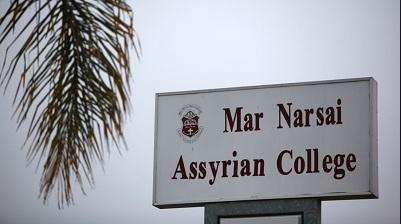 No place in Australian Culture – shut it down!

And so Malcolm splurges hundreds of millions on border security after da flood, on tackling middle eastern crime gangs here, on his $126 million muzzie fence around Parliament House, while at the same time Mal welcomes in the imported Arab problem.

Mal:  “It’s very important that everyone in Australia remains vigilant.”

Some 6000 Syrians have been dumped on Fairfield in the past two years. 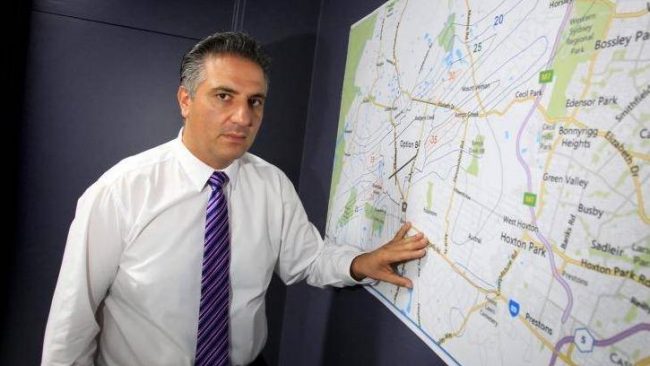 He reckons that if more infrastructure isn’t diverted from local Australians to imported Arabs in South West Sydney, his refugees might be encouraged to move elsewhere.

Put an ethnic in government and he’ll prioritise ethnics!

Hey, Assad want them back home Frank!  Syrian President Bashar al-Assad says that Syrians displaced by the war can now return to Syria without facing any restrictions from the government.  “Come home and rebuild.” 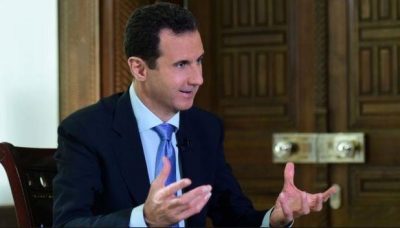 Ditto all Iraqis and Afghanis.  Across the one-off 12,000 cohort and the regular humanitarian program, Fairfield took in 75% of all western Sydney’s fake refugee intake, with Liverpool City Council second at 14%.

The suburbs have also observed a “secondary settlement” phenomenon, with swarthy refugees moving to the Fairfield area after their initial arrival in other locations, some of which are interstate.

Between July 2015 and January 2017, 15,897 Arabs from Syria and Iraq seeking First World welfare in Australia, according to the Turnbull government. Of these, 9155 were part of the additional 12,000 places announced by former prime minister Tony Abbott in September 2015.

Liberal Party donor Urban Taskforce boss Chris Johnson has a Shanghai vertical vision for the future of Fairfield and Cabramatta which includes 55 high-rise apartment towers close to the railway stations. He reckons Sydney’s population should rise by 1.6 million swarthies over the next 20 years and the only way is up.

“I think we should be aiming to house 30 per cent of the population in towers, over the next 50 years,” he said. 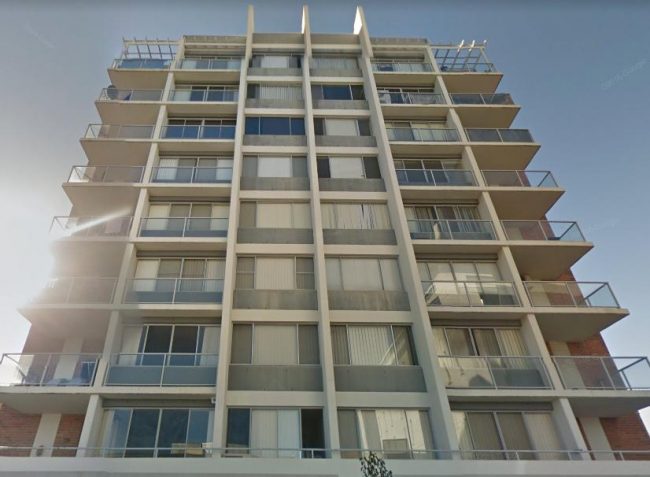 It is a flood of anti-Australians invading and then demanding we change for them.  Buffer them and bugger Canberra!

This is what the Urban Taskforce hopes the Fairfield local government area will look like in 50 years time. 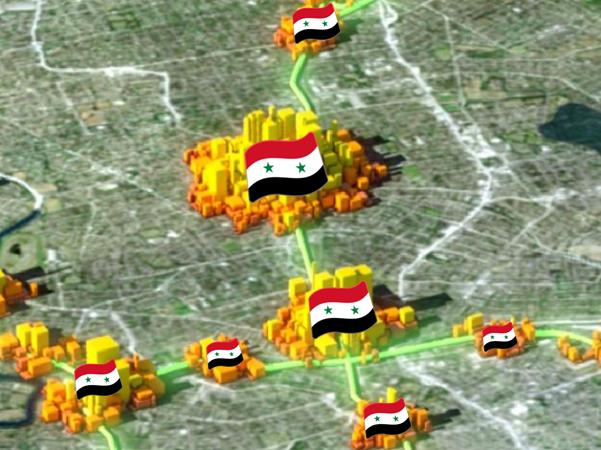 Why rebuild your home in Syria when you can do a runner at Australia taxpayer expense?

Johno won’t care, he won’t be around.

Liberal Senator Zed Seselja, the Assistant Minister for Social Services and Multicultural Affairs (and a full-blown ethnic) said: “Locations have been identified for the settlement of the additional intake of Syrian and Iraqi humanitarian entrants across a mix of metropolitan and regional settlement areas, in all states and territories.”

Some people feel that there’s a large concentration here and it’s putting pressure on services but from a client’s perspective, having those links is crucial to settlement

One hour west of the Sydney CBD, Fairfield and the surrounding areas have been a multicultural hub and destination for new migrants for many years, with large Iraqi, Assyrian, Chinese, Vietnamese and Lebanese communities.  Fairfield council covers roughly 200,000 people. The unemployment rate is consistently above 8%, notably higher than the latest nationally – 5.6%.

Clement Meru, the manager of multicultural communities at CORE Community Services in Cabramatta (we term ‘Foreigners Before Needy Aussies’ or FBNA) said new ethnic arrivals brought a resilient and positive attitude and had received warm welcomes from fellow countrymen and leftards alike.

Of course he would claim that.  Meru heralds from deepest darkest Sudan. 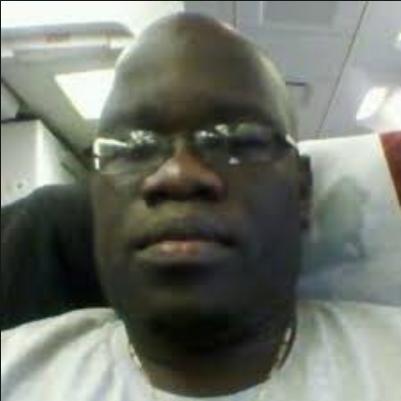 Meru reckons “In Fairfield we have the capacity and the experience necessary to provide support” for anyone so long as they’re not Australian.

“Canberra is very generous with the Australian community’s wealth and there’s a lot of goodwill down there, so long as you’re not Australian.”

“We’ve been generous since Whitlam in 1975 imposed all those slopeheads on what was once a happy working class Aussie Cabramatta.”

Probably a good thing they demolished Gough’s childhood home at 46 Rowland Street Kew.  Gough would be pleased his Chinese comrades put a Maoist compound on the site.

Forty years on, the centre is still helping migrants connect to services such as those in health, employment and language.

“People tend to settle in communities in areas where they have social links, speak no English only foreign jibber, eat traditional food, and want everything for free.  We liken ourselves to resort providers to da Third World.  Public housing stock is low and private housing rents are increasing, so there needs to be some investment from the state and federal governments.”

In the 2015-16 mid-year budget update, the government allocated $638.1 million over four years towards supporting the additional Syrian and Iraqi refugee intake. Additional funding has been set aside based on the anticipated number of future arrivals.

Finding housing for refugees will be one of many responsibilities for Western Sydney University chancellor and former head of the Australian public service, Peter Shergold, who takes on the role as Coordinator-General for Refugee Resettlement in NSW.  His organisation provides support to recent migrants by introducing them to local communities and linking them up to education, training and employment opportunities.

“There are challenges here and there. One of them is employment. Especially recognition of overseas qualifications and experience. Especially with the intake of Abbott’s 12000 Syrians.  We just bend the rules and displace the local Aussie.”

Australians have a right to reject invasion, more so than any invader reckons he has a right to invade.  Any national has a right to defensive racism in his own country when the government goes feral and undemocratically invites invasion.

What else can a patriot do but democratically resist, reject, not pay taxes,and vote for Australia First – save vigilantism, rebellion and civil insurrection?

Australian patriots have a democratic right to resist and reject Abbott’s Arab Leeches. 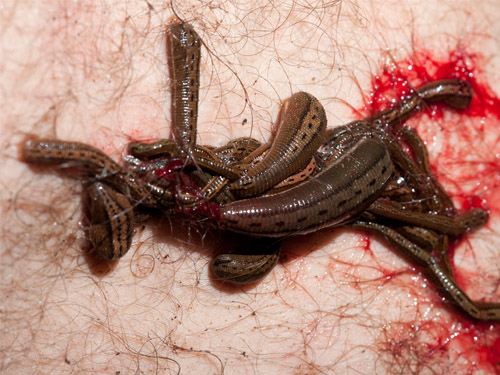 Syrian, Iranian, Iraqi, Afghani – there all Third Worlders here to leech and Australians didn’t invite them leftards and government imposed them on us to undermine our great nation. Then they rule that these foreign cultures and religions must prevail and so impose multiculturalist dictats to silence local protest and to corrode our Australian way of life.

Nice one Abbott, you treacherous filth.

He knows Fairfield is struggling to resettle the fakester refugees after the 6000 influx of new arrivals with their had out.

“It has put a bit of pressure on the local schools, local community organisations.” – understatement!
Everything in Fairfield is overstretched.

“There’s been a great amount of ethno-specific organisations and religious organisations that have come on board and have been wanting to help and assist. The pressure is on.”

.
He said a more localised approach was needed, as community groups and services struggled to cope.

“I think that the funding could either be increased or better allocated — it could be put in place in a localised area rather than a regional one, so that it can have a better impact if you will.  There is a recognition now that a large proportion of refugees are resettling in the Fairfield local government area. It is very difficult when you first arrive, with housing, bad attitude and wanting to kill everyone, so English language learning and employment services are all needed.”

Aussies need not apply.  Frank reckons many service providers funded by the Federal Government are not located in the actual Fairfield local area, but instead to needy Australians, and that this had to change.

“Canberra is funneling the foreign flood to Fairfield and we need a bucket to cope.  While Liverpool or Bankstown might be reasonably close, it is too far for locals struggling to integrate into the Australian system,” he said.  “I don’t believe the funding is being used as wisely as possible. We have great local service providers, they know how to resettle people. Let them do their work.”

Fairfield council is currently working to develop a plan to deal with the surge in new arrivals, push out the Aussies, and anticipates it will be made possible by intimidation.  They hope Canberra’s bias will be forthcoming to help ease pressure.

Major Parties in Bed Together on Imposed Mass Immigration

Abbott’s ‘special intake’ of 12,000 was less than the Quad Coalition Parties – Libs-Gnats-Greens-Labor – they wanted more of the blighters!

And that doesn’t count all the clan and village reunion hangers-on and then the bloody Arab breeding assault.  In two decades when their Arab offspring are of fighting age, the gang violence in Fairfield will be like Alleppo, Beirut, Sao Paulo and Marseilles.

More than 500 Syrian and Iraqi fake refugees have been refused entry to Australia during more than a year of vetting, with 12,000 other Syrians being found eligible for resettlement, according to Australia’s Immigration Minister Peter Dutton.

He said the screening process had been based on intelligence provided by several countries, including the USA, Britain and Canada.

Dutton said the Islamic terror attacks across Europe justifies Australia’s decision to be very selective about who it let into the country. We will decide which ragheads come to our country and the circumstances of their welfare seeking.

He said Australia would have faced “significant consequences” if the government had brought the fake refugees to the country rapidly as proposed by the opposition Labor Party.

But the polices of all four parties are the same on immigration and multicultism – whatever it takes to undermine and corrode Australian per capita wealth.

Fairfield, a valuable piece of Australia, has been fed to the dogs. 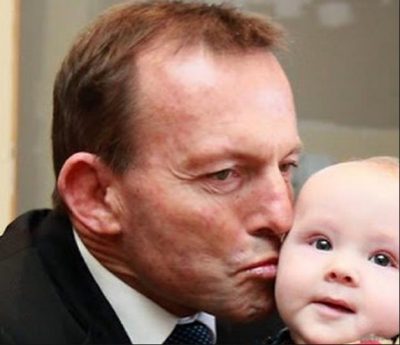