Skip to content
Authored by Lorraine Sharp and others.

Australia First Party is actively campaigning against the China Theme Park in the Warnervale area of Wyong Shire on the New South Wales Central Coast.

We have received an official letter from Doug Eaton Mayor of Wyong Shire. We regard the letter as deceitful, but more than a deceit, it opens up the gates of hell regarding the debate on the issue of the China Theme Park.

We reproduce the letter: 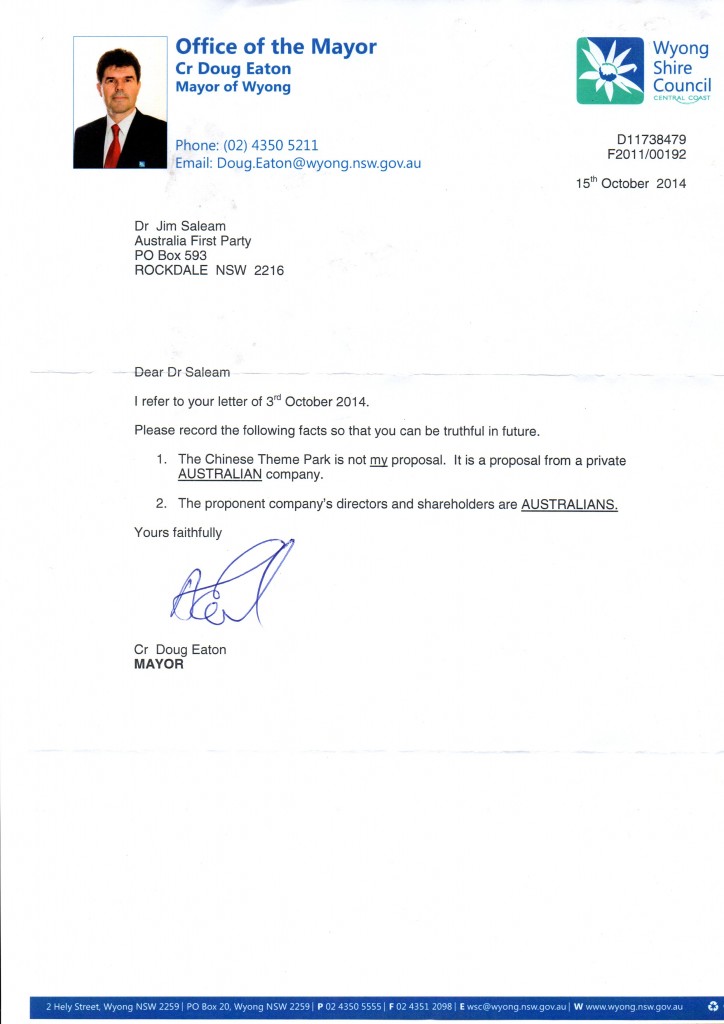 Mayor Eaton says the directors and shareholders of China Theme Park Pty Ltd are “Australians”. Perhaps we have different definitions of ‘Australian’. Even so, they may hold Australian passports, but this is not “proof” that they might not be dual citizens, or simply Chinese nationals with resident status. Many of these company lights, in fact, live in China.

We reproduce the company extracts from ASIC: 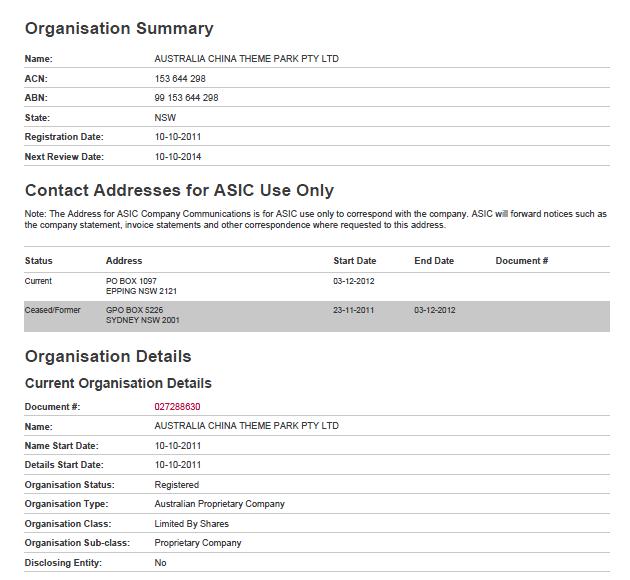 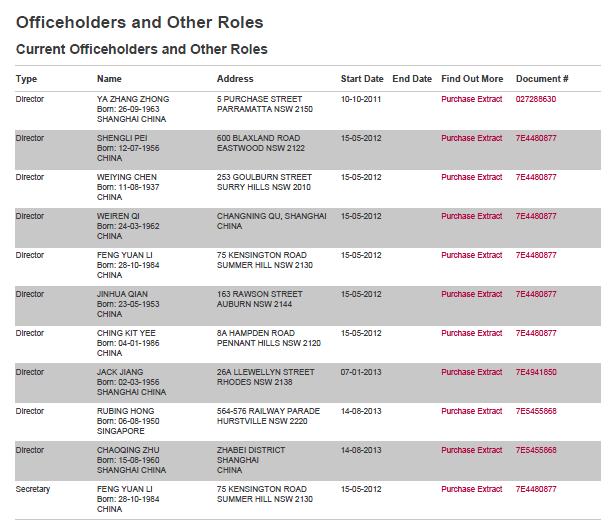 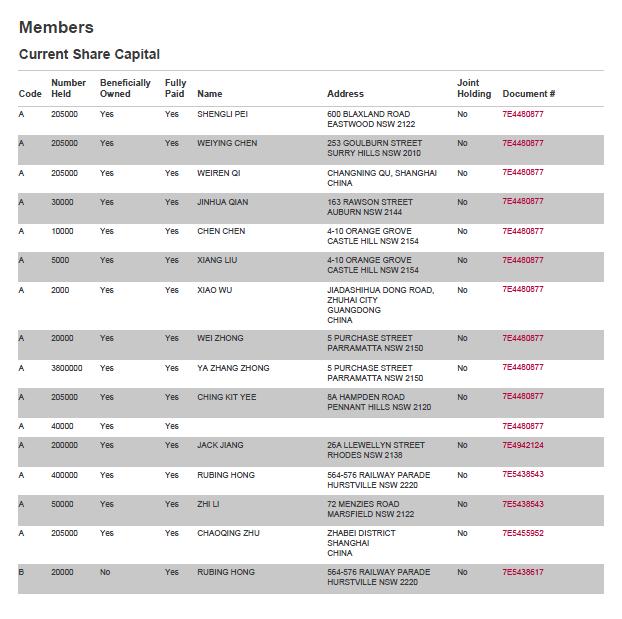 What could we freely assume about this gaggle of company officers? Are their loyalties to their Motherland (China) and not to Australia? Is their company a political fraud.

We know that there are many of these funny front companies registered with ASIC which are advanced large sums of money from the Bank of China or other Chinese banks owned or at least controlled by the Chinese state. These banks also advance large sums of money to companies around the world, whether they be in Africa, Australia, U.S.A, Europe or elsewhere; but the loan money is Chinese money from a state-owned bank or a bank loyal to China. The idea these banks have loaned this money to a free enterprise model company – is nonsense. They have the control.

Mayor Eaton has himself said in the past, “the developers were “Australian-based Chinese’, but they will raise the money through government support in China”.

So are they Australia based Chinese – or so-called Australians? What do these banks and the Chinese state get in return for their investment?

A paper reported of the Theme Park which would be divided into 33 parts, one for each province of historical China:

“Chinese investors would own each province, which would be culturally relevant to the region it represented. Wyong Mayor Doug Eaton said he had no doubt the group was serious about its plan. During a recent visit to China to discuss the proposal, they had demonstrated strong investor interest.”

It was reported that Mayor Eaton had said:

“In China, you can’t do anything without the approval of the government, so this is basically a letter of comfort to the investors. “On that basis they will be able to firm up the funding that they need. Bank interest rates in China are very low, so a lot of people are looking for investment opportunities.”

“We have received great support from the beginning from the Foreign Affairs Office of the Shanghai Municipal People’s Government and Office of Overseas Chinese Affairs of the Shanghai Municipal People’s Government,  Bruce Zhong noted. “They twice sent a delegation to visit Wyong and the land”. In fact the Chinese Tourism Bureau will be setting up an office at the China Theme Park.”

Indeed. That is now clear to us.

The Park is being bankrolled by Chinese investors and the Shanghai Government, which have together formed the Australian Chinese Theme Park (ACTP) Pty Ltd.

And there is a past to all that too.

We recall that a 300-year-old palace representing the Ming and Qing dynasties is planned to be dismantled near Shanghai and rebuilt as a museum at the site.

Why would such a thing be done if not to dwarf Australia’s colonial history with the history of a non connected alien state? Is that not a type of cultural imperialism?

Australia First Party have said all along, that this is a Chinese State enterprise designed to take over Australian land and the local economy and subordinate the region to Chinese imperialism.

It has also been strongly rumoured Mayor Eaton’s wife Ruby Eaton has a business interest in this Theme Park development? And that she does so under her Chinese name. That is common talk all over Wyong Shire. Can Doug Eaton put that story to rest? Yes? No?

Another curiosity in this whole charade is Mr Eaton’s “surprise” or stage- managed move to Liberal State politics in the upcoming NSW election. Why has Mr Eaton decided to slither off down the road to the Entrance and not stay in Wyong to be a voice for the people of his proclaimed beloved Wyong? Is he just hanging around long enough to see the current Chinese projects through? Do the Liberals see Eaton as of more use for future Junkets as a State MP positioned at The Entrance? Of course, if he stood for the Wyong electorate , he would have to answer hard questions. In his absence, people will draw certain conclusions regardless.

It is somewhat obvious that Mayor Eaton’s letter has not dismissed this affair, but only intensified the questions that lie around it. The whole Central Coast is being grabbed by the Chinese corporations. The Warnervale project is at the core of it and deserves popular attention and resistance.

The people of Wyong should vote for Alex Norwick at the upcoming State election, to send a clear message to Mayor Eaton and his clique and anyone else who seeks to take advantage of, deceive and dispossess the people of Wyong. It’s time to build a community resistance. Eaton’s China vision for Wyong must be brought down