All the media were invited for the protest stunt. 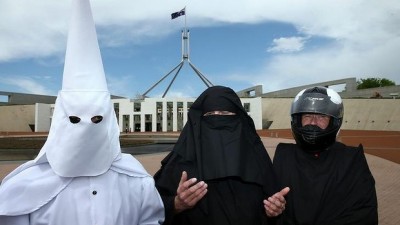 Anti-burqa protesters dressed in a motorcycle helmet, a Mulsim niqab and a KKK uniform attempted to enter Parliament House with their faces covered to make a cultural point. The three representing a protest group “Faceless” said they opposed the decision earlier this month to overrule a ban on the burqa being worn in the public galleries over the Parliamentary Chambers. 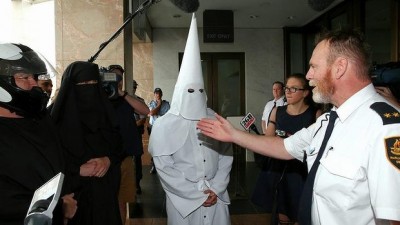 Police required only the motorcycle helmet and KKK head dress be removed, but allowed the Muslim niqab be permitted for sensitive multicultural reasons.  This is despite the fact that all three were Aussie men making a cultural statement.

Aussies Sergio Redegalli, Nick Folkes and Victor Waterson call their protest movement “Faceless” and oppose the burqa being worn in public spaces. They also expressed strong views against what they said was the “political ideology” of Islam which they said was “contrary” to Australian beliefs. 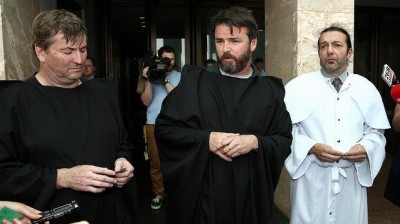 Mr Redegalli removed his Ku Klux Klan mask to reveal a niqab underneath.  He said “so I guess this is the time to say that I’m now allowed into Parliament House am I?” “No,” responded the security guard.   “Bit of a loophole, eh?” Mr Redegalli questioned.

Redegalli removed his Ku Klux Klan mask to reveal he is wearing a burqa underneath.

“Because we’re males so there’s a bit of sexism there. It seems you’re allowed to wear a full face covering into Parliament if you’re a Muslim woman but no other group is allowed to have that same privilege,” Mr Redegalli said.