by Dr. Jim Saleam and another

Recent attempted sackings of waterside workers employed by the Hutchison Port Holdings (HPH) in Sydney and Brisbane show that privatisation continues to create job losses – while the threat of imported ‘contract labour’ is ever there. 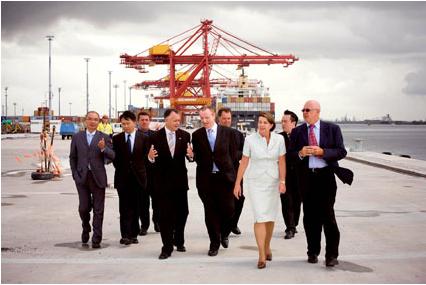 “The company is owned by Li Ka-Shing, the 17th richest man in the world with an estimated net worth of $27 billion. Forbes magazine listed Li Ka-Shing as the 28th most powerful person in the world in 2014, ahead of Rupert Murdoch, IMF Director Christine Lagarde and the Presidents of Brazil, Japan and Egypt.”

We note that Li Ka-Shing may ultimately own much of New South Wales’s electricity infrastructure and other key Australian infrastructure, facts that have pointed to dangerous security breaches for Australia.

The problem with foreign contract labour and its inter-relationship with the new Chinese capitalism is one the Australian trade union movement is just begun to face. However, many unions are organizationally dominated by Labor Party would-be parliamentarians and similar stooges and occasionally they are strongly influenced by old-Left forces still lost in the days of ‘socialism’ and communist style class war.

The MUA is one of those latter type unions. The MUA supposedly represents 16,000 Australian stevedores, seafarers, and other maritime workers and is an affiliate of the 4.5 million-member International Transport Workers’ Federation.

The MUA has always had an active communist fraction and it will pander to false internationalism.

“It is expected the new terminal will deliver 9000 new jobs and boost the state’s economy by $16 billion over the next 20 years.” 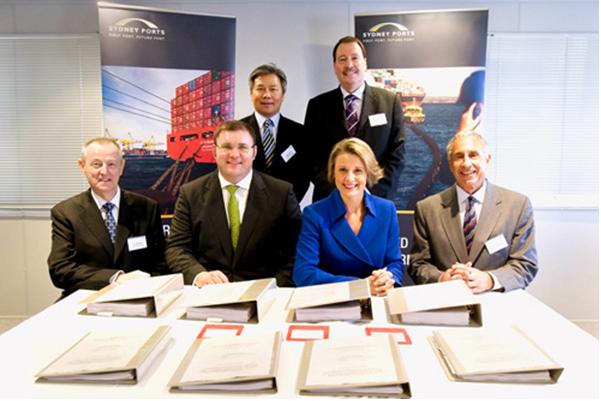 The link below shows that the MUA will oppose free trade agreements with China that will threaten to wipe out Australian small businesses and agriculture and so forth and will oppose the use of contract labour – but still say – “Racism Not Welcome”.

Since when in reality is protecting yourself from the loss of identity and independence and your livelihood – “racism”?

Or is the MUA just playing with the old socialist internationalism of yesteryear? The old stuff about the workers of all countries being brothers in a war to make a world utopia? 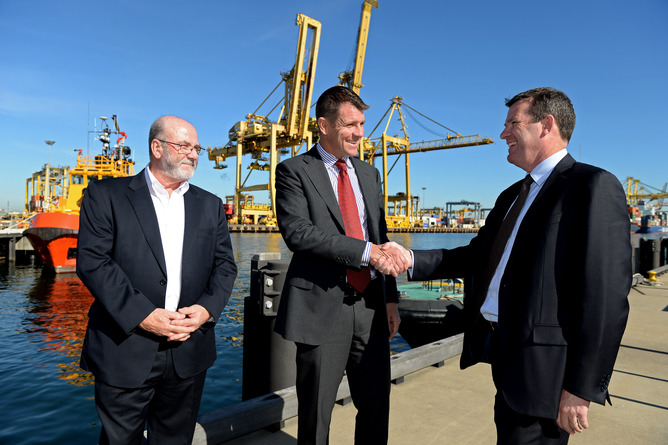 In 2013, then New South Wales Treasurer (now Premier) sells off Port Botany and Port Kembla to Arabs for $5 billion

Meanwhile, unions representing some of Australia’s lowest-paid workers have been caught out using imported labour, with United Voice employing nine people on 457 visas.  Australia’s Immigration Department has revealed that “workplace relations adviser is the most frequently­ sponsored occupation’’ among unions, “with the other sponsored occupations being copywriter, organisation and methods analyst, database administrator, and training and development professional’’.

Departmental records reveal that in the past five years, several unions, including from the Maritime Union of Australia and the Transport Workers Union, have sponsored 41 workers on 457 visas.

Most of those on union-sponsored 457 visas are from Britain and the US, with workers also coming from India, The Netherlands, Canada and Singapore, answers­ to a Senate inquiry into Australia’s temporary work visa programs revealed.  The average salary is $72,497, the minimum salary is $52,080 and the highest salary is $118,502. 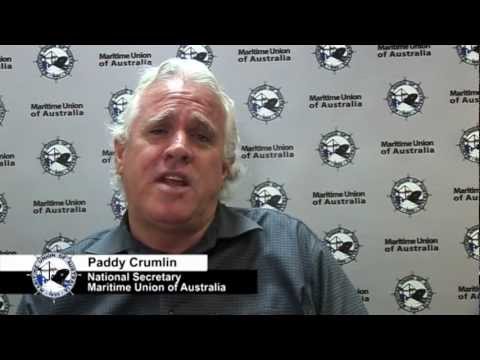 The funny thing is that the Communist Party of Australia (CPA), whose branch in the MUA is very active, actually had contact with the One Nation party in 1997.

Leaders of One Nation met privately in Sydney with Peter Symon, the then Secretary of the Communist Party. Symon informed the One Nation reps that his CPA refused to join the anti Hanson /anti racist demonstrations. Symon said that these demonstrations were organized by Trotskyites and their internationalism blinded them to seeing any objective all-Australian interests. Symon said he accepted that One Nation’s public critique of foreign economic takeover was justified and while he wouldn’t support One Nation, he would not oppose it in the open. We doubt the current CPA will deny this conversation took place.

In 1998, during the Patrick’s Stevedoring dispute when the Liberal government actually tried to break the MUA on Aussie waterfronts, the leadership made contact with National Action. They asked what National Action’s view was of the dispute. The leader of National Action informed the MUA that they opposed Liberal attempts to make all labour so-called ‘free labour’ or body hire labour, that they opposed foreign labour contracts and so forth. The MUA was pleased with this and requested support. It is understood National Action donated food and other items on the MUA picket lines.

The current struggle for the MUA involves part of the process that is seeing our country’s whole economy and its resources – globalised. To oppose the loss of their livelihoods, the union can muck about with the old socialist internationalism, or they can actually defend Australian workers come what may.

In other words, a patriotic attitude not a ‘socialist’ one is required.

For what our comment is worth, we would prefer the MUA wins its present dispute with Hutchison Ports.

And we leave the Trotskyites and anarchists who read our page with a final comment; it is the nationalist movement which offers a future to Australia’s working class. For what?  More foreign scabs?