Just over a year ago in the first week of March 2013, Sydney-based anarchists orchestrated a riot on the grounds of the University of Sydney.

Anarchist members of Sydney Anarchists, Antifa and the hate website Slackbastard linked up with USYD staff who were members of the National Tertiary Education Union (NTEU).

Striking University of Sydney staff were observed distributing protest leaflets to university students before the riot broke out. 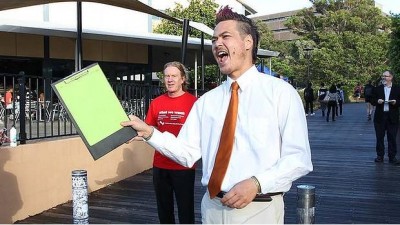 The disruptive intention of the anarchists and rebel staff was to establish picket lines at all major gates of the University of Sydney designed to grind the campus to a halt.  The organisers agreed that with the university having almost 40,000 students attending the main campus and thousands of staff, stopping them all was going to be “challenging”.

”We’ll be picketing the main campus from seven o’clock on Thursday morning, at all the main entrances,” said Michael Thomson, branch secretary of the NTEU.

The NTEU linked up with Students’ Representative Council president David Pink at Sydney University.  It is also reported that members of Sydney Anarchists a week later on Thursday March 7, 2013,  instigated the first anarchist attack on the campus of the University of Sydney.

This attack was reported on Sat 16 Mar 2013, on the Anarchist blogsite Indymedia.org.au authored by web anarchist Dave Fregon, that “in the early hours of March 7 some anarchists broke into the abandoned St Michaels College building on City Rd on the Sydney Uni campus.”

Dave Fregon is a committee member of the Atheist Foundation of Australia Inc. and is linked to the University of Sydney’s Atheist Society.

“For some of us it was our first time inside, while for others it was a happy return. After exploring the building and planning the day ahead, we dropped a massive banner off the roof which said:
“WE ARE THE UNI WE CAN SHUT IT DOWN. STAFF + STUDENT STRIKE” 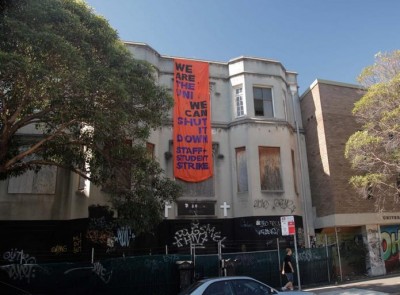 In the weeks preceding March 7, anarchist students, staff and supporters heavily promoted the strike by plastering the uni campus and the surrounding areas in strike posters, stickers, chalk and graffiti slogans.

Starting at 7am, picket lines were set up at all seven entrances to the university with varying degrees of militancy. Pickets with a large number of union officials were most eager to simply hand out leaflets and let students and scabs through (after making an agreement with management that pickets would not block anyone), while pickets with more anarchists and militant unionists made it clear to everyone, particularly scabs that the uni was closed, and barricaded entrances with linked arms and large banners reading “STRIKE” “NO CLASS: CLASS WAR” and another reading “SPENCE: THE ONLY CUT WE NEED(featuring a caricature of the vice-chancellor, Michael Spence and two guillotines)” 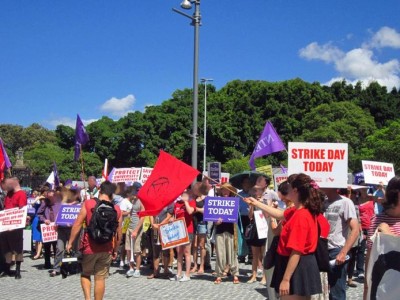 Not content with merely picketing, some crews of anarchists roamed the uni, specifically targeting the libraries and lectures and managed to convince a number of students to leave the campus grounds and join the pickets.

Over a dozen lectures were disrupted and the scab lecturers abused and called out for being the rotten scabs they are. Stickers reading “I AM A SCAB” were stuck on the doors of various professors and academic staff that chose to cross picket lines. Metal fencing was dragged across campus from a nearby construction site and used to blockade the library entrances and two banners were hung from the Parramatta rd footbridge entrance reading: “STRIKE OCCUPY TAKE OVER” and “STAB A SCAB CUT THE COPS”

In the afternoon, there was a march of 1000 staff and students through the university grounds chanting “one struggle, one fight, staff and students strike!” While various union bureaucrats and politicians made speeches, more militant strikers and supporters chanted “NO CLASS, CLASS WAR!”

Labor Senator Doug Cameron turned up and gave a speech to the protesters.

Just weeks later the University of Sydney experienced a second on campus riot. 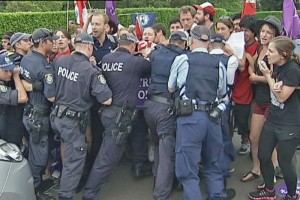 Just as classes were commencing for the 2013 year, on Tuesday March 26, a second strike was organised by the anarchists.    Scores of staff and students together were picketing the university’s entrances preventing student access.  The NSW Police riot squad was called and five violent protesters were immediately arrested. 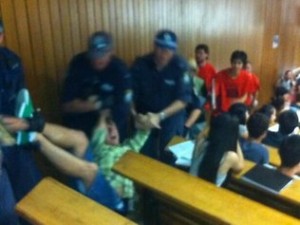 There were several incidents involving police – in trying to break the picket line so others could enter freely, in trying to remove protestors from a building, and in removing them from the lecture theatre. 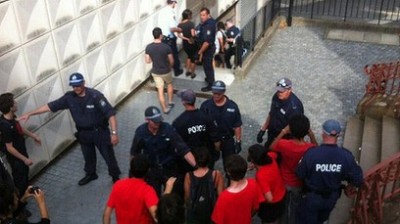 About 600 academic staff of Sydney University were involved in the strike action and violent protests. 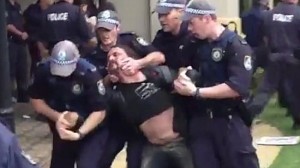 “Our fight is for control of the university, not for control of the mechanism of the degree factory but for their abolition. We are in struggle to take over the physical space of the university, not just for the use of the relatively privileged staff and students, but to transform it into a communal space for all. We wish to establish a physical territory liberated from cops and commerce, a free space from which to wage attacks on the institutions and representatives of capital that surround it.

While some may mock this goal as unrealistic, we see it a mere first step. A free university under capitalism is like a reading room in a prison. We seek the complete destruction of capitalism and every social relationship that facilitates its reproduction. The university is a fundamental mechanism of the capitalist project, every year it produces qualified and disciplined workers for the mining, law and finance industries which suffocate our ability to live.”