Fairfax’s divisive attack article on Australians’ Reclaim Movement was sourced from known Leftist extremist who calls herself ‘Van Banham’ (not her real name – so we are investigating).

Fairfax published her tirade last Tuesday, in its local Melbourne Age three days after the much publicised Aussie Patriot Rally on Saturday July 18, 2015.

Van Badham’s piece is pure Leftist propaganda of the first order.  It ain’t journalism and goes well beyond blurring fact.  It is a deceitful series of lies after lies and a work of fictitious manipulative propaganda.

Is it no wonder that Australian news readers are turning off Fairfax for its biased Leftist shite?

In March 2015, Fairfax Media came clean with its plans to sack 80 journos in Victoria. Three years ago Fairfax sacked 1900 of its own.  This month Fairfax announced it will let go 35 staff across regional South Australia.  A week later Fairfax Media announced that it would cut more than a third of its editorial staff from its Australian Community Media (ACM) business and will be axing its rural masthead ‘The Land’ as an up yours to rural NSW – you are no longer relevant to Fairfax management’s salary bonus!

With empty news rooms, Fairfax must be desperate for content; so desperate they phoned The Guardian and paid freelance political spin merchant Van Badham, the Lefty bitch who calls her self a playwrite.  How commie bohemian!  (She’d appreciate that label). 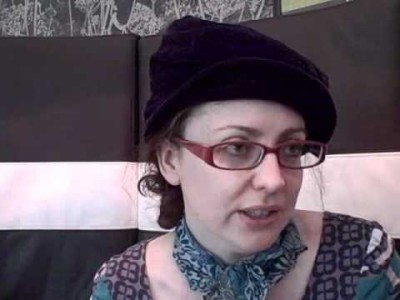 Nuh. She’s just just another globalist communist who hates her parents and so hate Australian values.

Bad bitch generalises all so-called Reclaim ‘Right” protestors in last Saturday’s protest and “extremists”.  It is part of her imagined narrative directly encouraging the extreme-left to violence.

One would expect nothing less of Van Bad bitch. But then her entire works are of fiction out of her dumpster world view.

(Van Badham’s inciteful tirade of mistruths is reproduced at the end of this article. We know why Daily Stormer relegates her as ‘The Commie Bush Pig‘).

“While a Deputy Commissioner of Victoria Police has effectively equated all the Reclaim protestors (whether civic-patriot or nationalist) with the extreme-left (he did concede the extreme-left did most of the violence), The Age, as a media propaganda arm of the establishment, suggests that the “far-Right’ is more dangerous and because it cannot be deterred, public mobilisations are necessary against it. Of course, in Van Badham’s account for The Age, the extreme-left is re-branded into an “anti racist” counter protest movement. This was precisely what we said the media would do. The actual nature of the extreme-left is obscured to the average citizen’s view.. He might think that ‘anti racists’ are the dominant and threatening team and buckle under to conform.

The Reclaim is now a “hate group”. What happens then is that these people bend over backwards to not be a “hate group”, not to be an artificially created yardstick label. They quickly mutate into a soft version of the type of critics we see on the fringe of the Liberal Party, people who quip at multiculti but who don’t want to change it and people who endorse the government’s Middle East policy because it is seen as fighting Islamism. In our language, they become satellites of the Liberal Party.

That is a game that demands an independent nationalist line addressed to all Reclaimers.

The Age is serving well in the propaganda war. It hints that this “speech” of these “extremists” cannot be free. Is that what NSW Deputy Police Commissioner Kaldas was hinting at last week when he addressed an anti racist (sic) meeting in Sydney?

Events are moving. Struggling against the establishment’s propaganda is a new field for patriotic people. The nationalists of Australia First Party will assuredly – lend a hand.” 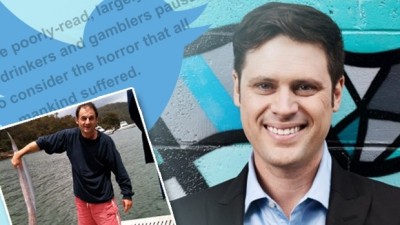 So Lefty Van Badham’s Guardian article was paid for by Fairfax for $500 to be reprinted in The Age Tuesday July 21, 2015 following the Aussie Patriot Rally of last Saturday July 18 , 2015.

“The political environment that’s emerged in Australia has emboldened far-right groups to organise and demonstrate. 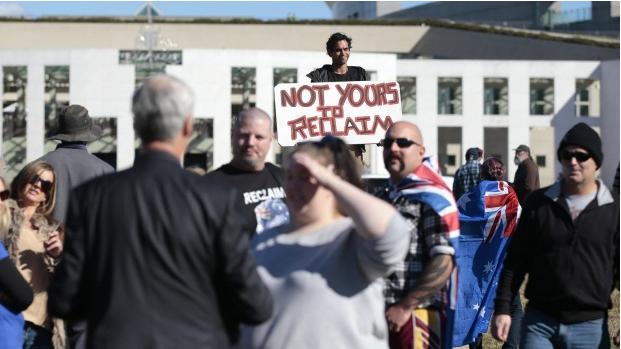 Demonstrators in Canberra. Photo: Jeffrey Chan   (Note the doctoring of the placard wording?)

“Last Saturday morning may have been sunny in Melbourne but it was also very crisp. Cold, however, did not dissuade an estimated 3500 people from attending a “No Room for Racism” demonstration outside Parliament House.

As the day unfolded, their fortitude was tested by far more than the weather. There were skirmishes with police and with skinheads, and  a pepper-spray drenching by police that left dozens of demonstrators in need of medical attention.

I reached the crowd at the top of a Little Bourke Street that resembled a war zone, streaming with the milk and water being poured by volunteer medics into burning eyes, and those suffering shock shivering in trauma blankets. Less than an hour later, the medics themselves were pepper-sprayed by police. 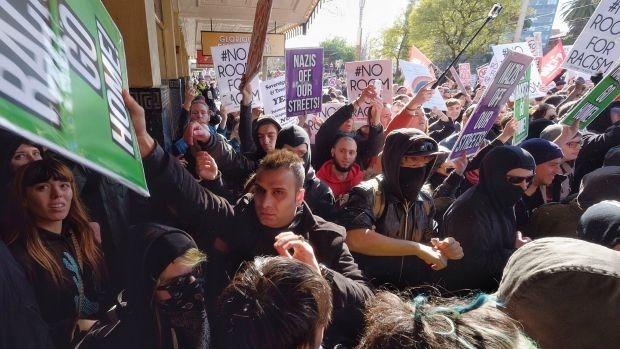 The actions of the demonstrators were howled down in certain news sources, with familiar depictions of the protesters as an anarchist rabble and scum. The resilience in the face of hostility demonstrated by a crowd that included a full spectrum of activists, hipsters, Christian pacifists, blue-collar workers, students and professionals should make every citizen in this city proud to be a Melburnian and every right-thinking Australian thankful that on Saturday they took one for the team.

No Room for Racism was organised as a counter-demonstration to something even uglier than the brutal scenes in the streets on Saturday. To coincide with Eid, the festival that celebrates the end of the Muslim holy month of Ramadan, two anti-multiculturalist groups calling themselves

Reclaim Australia and the United Patriots Front organised a weekend of anti-Muslim activities in 18 Australian cities and towns.

Bearing banners that opposed “non-white immigration” to Australia, and members who brandished swastikas, the groups had promised “the biggest patriot rally in Australian history” in advance of Saturday and promoted it with Facebook videos celebrating the 2007 murder of an anti-fascist teenager by a skinhead in Spain. 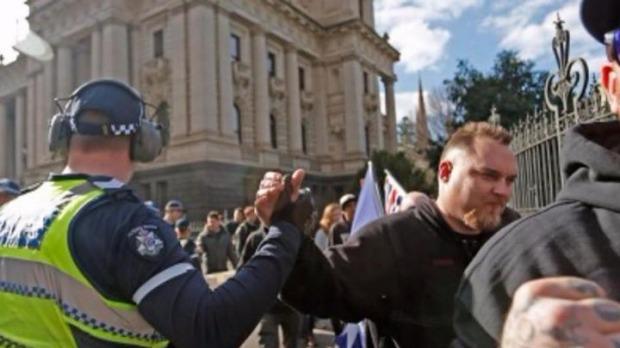 This is the third anti-Muslim event staged in Melbourne by these groups since April, and it’s not hard to appreciate why the far right are feeling emboldened to organise. Political rhetoric hyping threats to national security from the so-called Islamic State has resulted in federal senators staging halal inquiries, the parliamentary Speaker trying to enforce burqa bans in the House, and the Prime Minister remaining silent that National Party MP George Christensen addressed a Reclaim Australia event in Queensland at the same time that he’s banned his ministers from appearing on the ABC’s Q&A program. Those defending the “right to be a bigot” need to be aware that the activities of  Reclaim Australia and the United

Patriots Front are not limiting themselves to mere speech.

As a counter-demonstrator at the first Melbourne event in April, I was assaulted by an attendee who tore up my placard, was threatened with “Do you want to keep your clitoris?” and other sexual threats, and found my photographed self the subject of homophobic and anti-Semitic hate speech on a US-based neo-Nazi website after I spoke publicly about my experience.

However George Christensen may be justifying his participation, relationships of the movement’s leaders to fascist and neo-Nazi groups are explicit and well-documented. Because groups preaching hate, inciting violence and engaging in harassment have not been rebuked by the government and enjoy the tacit endorsement of a member of Parliament, the anti-racist movement has braced itself against the threats and made a point of turning out in numbers.

There are those in the progressive community who say counter-protests “give oxygen” to the extremist views such as those of Reclaim Australia and the United Patriots Front. This ignores the powerful encouragement and sense of validation given to the far right when their rhetoric and actions occur without consequences. Consider, for example, how communities in Europe – particularly Germany – maintain vocal public opposition to marginalise far-right movements there.

The audience for counter-protests is not the media, the police or even the broader community; it’s the far right and those who might be sympathetic to them, because their ability to represent themselves to potential recruits as anything apart from extremists and outliers is destroyed when they are vastly outnumbered and opposed. Note: the first Reclaim Australia Melbourne demonstration in April attracted 300 participants, but Saturday’s promised “biggest patriot rally in Australian history” attracted a mere hundred, while the number of counter-protestors had grown.
With photographs circulating on the internet of Victorian police seemingly “high-fiving” a skinhead, and outrage at the indiscriminate use of police pepper-spray on minors and medics, the  behaviour of police on Saturday raises serious political questions of its own.

But for all the physical pain and trauma inflicted on the counter-protestors, the police actions may have done more to assist the anti-racist, anti-fascist cause. Just as the threats of violence from the far right did not deter the counter-protest, neither has experience of the police’s chemical attack.

In whichever way the public is encouraged to judge the counter-protestors, the image of their resistance shows the far-right that the better values of Australian social inclusion are tougher than they are, and opposition to their agenda will not be going away.”