We note the following article in the local Sydney paper yesterday: 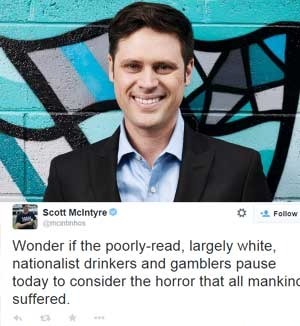 “SBS presenter Scott McIntyre has been sacked from the broadcaster after posting a series of comments about Anzac Day on Twitter that were described as “inappropriate and disrespectful”.

McIntyre, a soccer reporter and presenter, referred to some Australians marking Anzac Day as “poorly-read, largely white, nationalist drinkers and gamblers” on his officially verified Twitter account on Saturday night.

“Remembering the summary execution, widespread rape and theft committed by these ‘brave’ Anzacs in Egypt, Palestine and Japan,” he wrote to his 30,000 followers.

“Not forgetting that the largest single-day terrorist attacks in history were committed by this nation & their allies in Hiroshima & Nagasaki.”

“Despicable remarks which deserve to be condemned.”

But some commentators defended McIntyre’s right to free speech. Ten News’ Hugh Riminton tweeted that the presenter’s comments were “untimely, immature and in one case offensively wrong. But lest we forget, Our Diggers also died for free speech.”

Riminton is on the board of charity organisation Soldier On Australia, which supports Australian servicemen and women who have been physically and psychologically wounded in conflicts.

In a statement on Sunday, SBS managing director Michael Ebeid and director of sport Ken Shipp said the “inappropriate and disrespectful” comments had caused Mr McIntyre’s “on-air position at SBS to become untenable”.

“Mr McIntyre’s actions have breached the SBS Code of Conduct and social media policy and as a result, SBS has taken decisive action to terminate Mr McIntyre’s position at SBS, with immediate effect,” the statement said.

“At SBS, employees on and off air are encouraged to participate in social media, however maintaining the integrity of the network and audience trust is vital. It is unfortunate that on this very important occasion, Mr McIntyre’s comments have compromised both.

“SBS apologises for any offence or harm caused by Mr McIntyre’s comments which in no way reflect the views of the network. SBS supports our Anzacs and has devoted unprecedented resources to coverage of the 100th anniversary of the Gallipoli landings.” 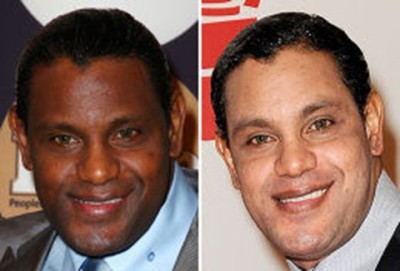 Scott McIntyre is the epitome of Leftist scum of the earth. May he get a job in leftist Venezuela.

Quote:   “Plenty of countries have survived fiscal incontinence by government, there’s something much worse going on in Venezuela. That is, the people running the place simply do not understand the concept of markets. Entirely bereft of any understanding of the job they do and why we use them. Completely ignorant of the manner in which we humans simply never have found anything else that can take their place.”