Why?  Well it is not clear.  Angelos Frangopoulos twat last Wednesday:  “I have today advised Mark Latham that his contract has been terminated. While we support strong opinions and robust arguments we pride ourselves in doing so in a civil and respectful manner.”

That was it from the baldy foreigner Angelos. Is that how Mark learned of his summary dismissal?

Then SkyNews leaked apparent complaints by leftist commentators Kristina Keneally (former NSW Labor Premier) and ABC radio host Wendy Harmer who had jointly complained to Sky News about a single comment made by Mark Latham on The Outsiders on March 12.  It was a chance to payback on their political enemy. 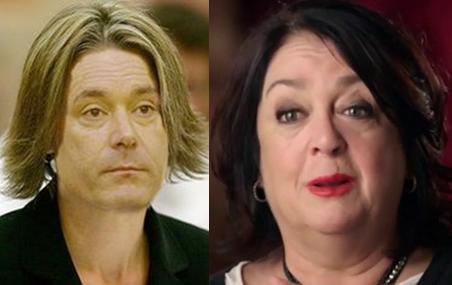 Latham had previously called Keneally out for what she is: a “Yankee sheila” and “protege of Eddie Obeid”, prompting her to lodge a formal complaint.

Keneally was in fact born in Las Vegas in 1968 – a Yankee with a Yankee accent. She’s a foreigner who advocates multcultism. Of course she does, she has a vested interest.

She was also installed as a political puppet of NSW Labor’s Terrigal Faction led by Eddie Obeid and Joe Tripodi, notoriously deposing Premier Nathan Rees on December 3 2009, after Rees had sacked ministers Joe Tripodi and Ian McDonald for corrupt conduct.  So Latham was telling the uncomfortable truth about Keneally, who keeps trying to rewrite her unsavoury political legacy.

On Sunday March 26, Latham had branded Wendy Harmer a “female with a disability” and a “proven commercial failure”, which prompted the ABC presenter to send in a legal letter asking for an apology.

Well, Harmer has a double cleft lip and palate, which factually makes her disabled and this is widely known since she works in media.  She was sacked from Vega FM in 2006 because of poor commercial ratings. In 2015, Harmer’s independent women’s news and commentary site Hoopla shut down after failing to find a sustainable business model.  So Harmer has withdrawn to the ABC’s “sheltered workshop” where ratings don’t matter because the whole thing is taxpayer-funded.

Harmer is a self-described “tragic leftie”, “an old-fashioned socialist” who advocates for acceptance of “gender fluidity” and Greens supporter – not tree-hugging so much as refugee-hugging humanist activism.

But Latham didn’t lay into the two lefties for mere political sport.  Both Keneally and Harmer have had public digs at Latham.  It’s just that as lefties, their bullying nature means that while they can dish it out personally, they sadly can’t take it.

Click image to play the original video with some humourous critiques.  It’s all a cuck! 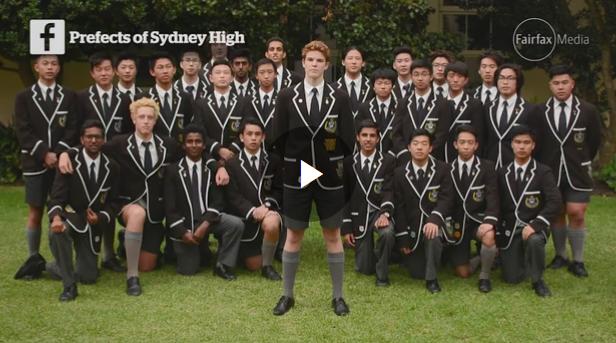 So the dumb video made in naive good faith had incensed Sydney Girls High School which formerly complained about the boys being misogynist.

Latham simply commented in response about the silly stunt:

“So the boys at the boys school look like dickheads doing their video, total dickheads, so they’re trying to do their own thing in their own stupid way, and they get attacked by the girls for being a toxic culture of misogyny.  I mean they just can’t win.  Why do they bother?  They are the damned dickheads.”

“Well I’ve gotta say Ross, you’re very perceptive in the world of romance, ’cause you’ve worked out for those fellas at the Sydney Boys High they’ve become undateable – because the left women think they’re hopeless misogynists the toxic culture, and sensible girls out in the suburbs will think they’re absolute wallies, and you wouldn’t go near them with a barge pole.

“I thought the first guy was gay, because they were putting out on set.  May be that’s all they’ve got left now at…anyway” 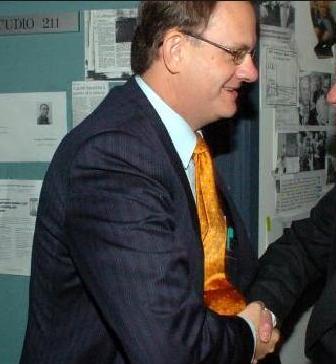 So Angelos Frangopoulos, how were these comments not “civil and respectful”?

It’s just PC bullshit.  The word ‘gay’ in standard English means ‘happy’, ‘light-hearted’ and ‘carefree’.  That the word has been hijacked by a deviant subculture to apply to homosexuals in an attempt to euphemise abnormal behaviour, does not mean normal people cannot continue to use the word for its normal dictionary meaning.  Cults don’t own English .  ‘Faggot’ reverses such crap.  Latham could have used ‘faggot’.

Anyway, SkyNews has sacked its most opinionated talking head for being exactly what he was known to be when hired – opinionated.

The delicate baldy also summarily sacked John Mangos in 2011 in the same way, by text message. John had served 15 years as the show’s anchor. 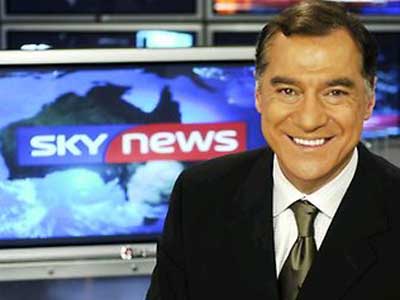 Latham didn’t come even close to Mangos.  Mangos had presented a news item on SkyNews show Paul Murray Live about a Chinaman who won a big lottery payout but disguised himself as Spiderman when accepting the cheque to conceal his identity.  Mangos told Paul Murray:

“I don’t know why he bothered. I mean, I can tell you now — he’s Chinese. He’s got straight black hair and he’s got squinty eyes and yellow skin.”

Latham has since twat:

“Why does bigoted Left assume use of word “gay” automatically negative? I love gays! Away from poisonous Left politics they are great people. Outrage industry totally confected: no reaction to Outsiders as it aired, yet 2-3 weeks later reheating BS offenderati. Complete fraud.”

Latham has praised the Outsiders programme for its “important work” as the “second most popular show on Sky” and that fighting political correctness would continue.

“Sky execs gave Outsiders every encouragement, always urging us on (love ratings), so thanks for everything, up to point of thrown under bus.”

“Within two months Outsiders became second most popular show at Sky, in awkward time slot, so many thanks to loyal viewers who love anti-PC.”

Then leftist ‘Buzzfeed’ social media site exposed Latham’s tweets to the Australian Financial Review in which Latham has had a weekly column for the past eight years.

So Australian Financial Review Editor in Chief Michael Stutchbury was leftie bullied to also sack Mark Latham as a columnist.

Past episodes of Outsiders can be listened to via Whooshkaa

“Wendy Harmer knows how to give it BIG time but like the typical lefty whiner she’s quick of the mark (pardon the pun) to complain and gripe when it comes back at her. That’s how the lefties work.
They give it out in spades but then run crying like the snowflakes they are DEMANDING an apology when it’s turned right back at them.
Harden up Wendy. Just harden UP!!!”

“Well…. there must be something wrong with ME then because I loved Mark Latham on the #Outsiders.
It was one of the best shows on Sky.
To be honest I’ve just about had a gutful of the bleeding heart, PC propagandists pushing their lefty cr*ap down my throat.
I’m even more ticked off with Angelos Frangopoulos from Sky for CAVING in to the SJW whingers and crybabies who are OFFENDED by ANYTHING and EVERYTHING!!!
Sky has now become the ABC LITE and if you look at Skys presenters list you will very quickly notice the MAJORITY are lefty snowflakes, ex Labor tools or ABC offcasts.
I like Paul Murray and Andrew Bolt and I still watch those shows BUT that’s it ~ that’s all I watch on Sky now.
I’ve become a Fox News USA junkie and that’s where my TV dial stays now.
Sky News Australia is a joke and a waste of space now that its been commandeered by the confected Lefty outrage tribes.
Maybe Angelos should check out what happened to ESPN when they ALSO turned so far to the left that their subscription base completely collapsed.
Once I can work out how to access Fox News without having to include Sky Australia in my Foxtel subscription then SKY will be permanently GONESKI in my house for good.”

“And by the way, has anyone seen any small sign of support from a writer in the Australian for Latham?  Talk about a bunch of brown noses.  (apologies to any exception(al) writer I may have missed).”

“You can high jack the Outsiders programme format with a bunch of new presenters but I won’t be watching. I have tuned out on Sky since the sacking of Mark Latham. You have crashed and burned the most authentic an best programme on the network. Adding a token woman would only make the show more unwatchable. Who cares I am off Sky that means all Sky programmes until Latham and co are reinstated. I know I am only one….but am I.”

“We admired Sky for its diversity. Will they now end up being just another station that won’t tolerate alternate views because it’s been put under lefty PC pressure to succumb.
The cunning plan of the far left; to infiltrate the media, our education system and our political arena is succeeding, and it continues unchecked thanks to our insipid, disconnected politicians.
Discontentment and loathing of the left’s aim to manipulate society and ultimately gain control of a system yielding to their own agenda is growing, but it very rarely has a voice.  Latham and The Outsiders bravely attempted to fill that space.
Their voices are still very much-needed, and deserve another chance. But to be credible, they need to play a smarter game, and not fall for lefty set bear traps.”

“The Franger has blown it!”

“Absurd, pathetic decision by a weak CEO appeasing faux leftist outrage. I’m disgusted. Is there no corner of Australian ‘mainstream’ media that is free from this PC madness? Mark is real, for all his faults, he is a REAL person. I shelled out for Foxtel simply to watch Outsiders.

“Read many below comments and the support for Mark Latham is extraordinary. I was hoping that would be the case. I lament that free speech is still a long way off. The journalists who push for free speech are few and far between. Maybe sometime in the future we will get a strong leader who will push all this b.s aside and we can get back to being normal Australians.”

“There goes the right to ‘Free Speech’ out the proverbial window.”

“These women have thin skins. One is an ex Premier and one works at the ABC which still prints the most outrageous things about conservatives. If they want to be treated as equals how about they stop complaining and get a bit of backbone.  Look at all the insulting things that were said about Credlin and she’s still going strong without official complaints.”

“I wonder which bit Keneally took offence to. Sheila or the Eddie Obeid bit. Sheila is an old Aussie term for women and girls, generally with spoken with affection. Eddie Obeid another story but very involved in Labor party stuff.” 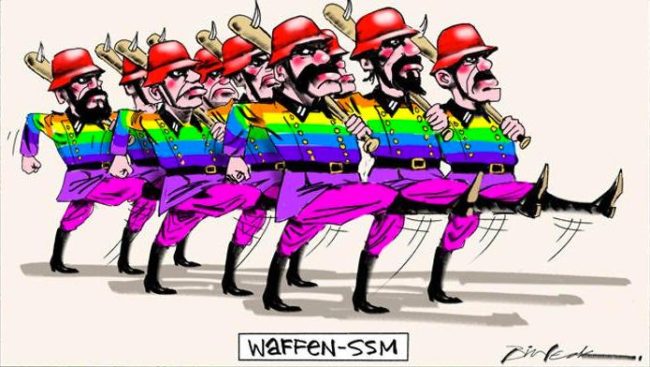 “Look at an old movie or see a cartoon, say, drawn from the 60’s or 70’s and people will say, ‘oohhhh you’d never get away with that now’.

Well, why not?  If it was funny then, it’s probably funny now but you’re not allowed to “get away with it” because everyone has become so censorious and everyone’s become you know, sort of finger, they like wagging their fingers at you and everyone is so morally superior.”