Since the recent spate of jihadi lunacy, Greens Senator Sarah Hanson-Young has gone all quite.  No bloody wonder!

Hanson-Young with her constant pro-asylum seeker campaigning has been the single lead cause of all the illegals welcome-matted into Australia under Rudd-Gillard Greens Labor Era (2007-2013).  Most of the illegals have been Islamic from the Middle East, and God knows how many have a criminal or terrorist past.

Treacherous bitch!  Since Bob Brown resigned, the green colour of The Australian Greens Party has not represented the forest green of the party’s grassroots.  Incrementally the greeness has been insipidly aligned to the green flag of Islam, as global socialists infiltrate the ranks.

The infamous PC media manipulator, Hanson Young cried for the 50,000 economic illegals as she bullied the PC media and senators to welcome the Third World into Australia.  Many of the illegals ripped up their identity records before Australian Border Control intercepted their scuttled boats.

The illegals paid good cash to board illegal boats from Islamic Afghanistan, Islamic Iran, Islamic Iraq, Islamic Lebanon, Tamil Sri Lanka – all civil war hardened.  The typical illegal boat charter fares per head ranged from $7,000 to $20,000 to Ashmore Reef.  Many of them have been Islamic.  No background checks were done, so the Labor Party government waved them all through – criminals, jihadists, the lot.   Many of them spoke Arabic.  Many couldn’t speak English and had no interest in learning. 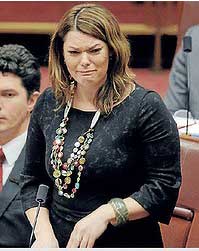 Despite the crocodile tears, Australia has well and truly performed its international humanitarian assistance above and beyond the call.  Job done.  All those civil wars are now all but over, so their claims for asylum no longer apply.  Their respective humanitarian visas ought to have lapsed.  So Australia should be issuing them all with exit visas back to where they came from.

But instead, self-proclaimed Queen of the Illegals, Sarah Hanson-Young, bullied the government in the Senate to have all the illegals get permanent protection visas, free medicare, free housing, free grocery allowances, the $5000 baby bonus per child.  So they bred baby jihadists.

This was the Aussie good life they were promised by their cousins already here. Heaven! 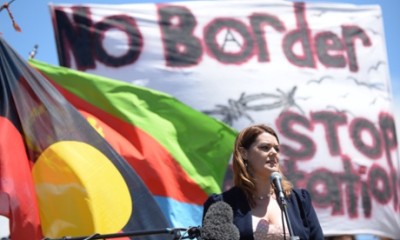 Greens -Socialist-Anarchist-Muslim alliance .. and conning Aborigines that ‘No Borders’ is somehow good for them

Greens-Labor multiculturalism policies have encouraged Muslim asylum seekers not to assimilate into Australian society but to keep their Islam, keep their customs, keep their attitudes and prejudices and backward cultures.   Facilitated by mass immigration, there are now more than half a million Muslims in Australia, concentrated mainly in enclaves in south-western Sydney and across northern Melbourne. 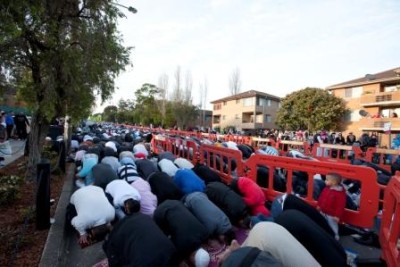 Mosques have sprung up.  The Middle Eastern crime wave across Sydney and Melbourne is out of control.  Sydney’s west is plagued by Middle Eastern gangs, gun crime, narcotics, nightly drive-by shootings and home invasions.  Lovely suburban stuff – in Beirut perhaps.

Still, the Socialist-Greens alliance blindly champions multiculturalism at any cost.  This extends to foreign socialist causes even it means backing radical Islam and terrorist organisations like the Muslim Brotherhood, Hamas and the Voice of Islam – Radio 87.6 FM in Lakemba. 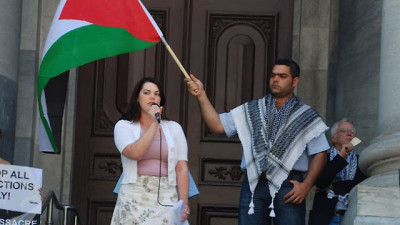 Even when the extremist Muslims rioted in Sydney Streets in 2012 about the U.S. satirical film ‘The Innocence of Muslims’, The Greens blamed not the violent rioters, not radical Islam.

Instead The Green-Left Weekly media blamed the film makers for “this blatantly insulting film.”  They blamed Sydney police for keeping the peace.  “The truth is, the police created the situation. They knew about the deep anger felt by some Muslims, fundamentalist or otherwise, about the film. The sensible thing to do in this situation is to not inflame things further. But that is precisely what they did.”

They blamed the Australian government and the media:  “Our government and mainstream media are involved in inciting or carrying out violence all the time, yet they have the gall to show outrage when it has its reflections in other spheres of life.” 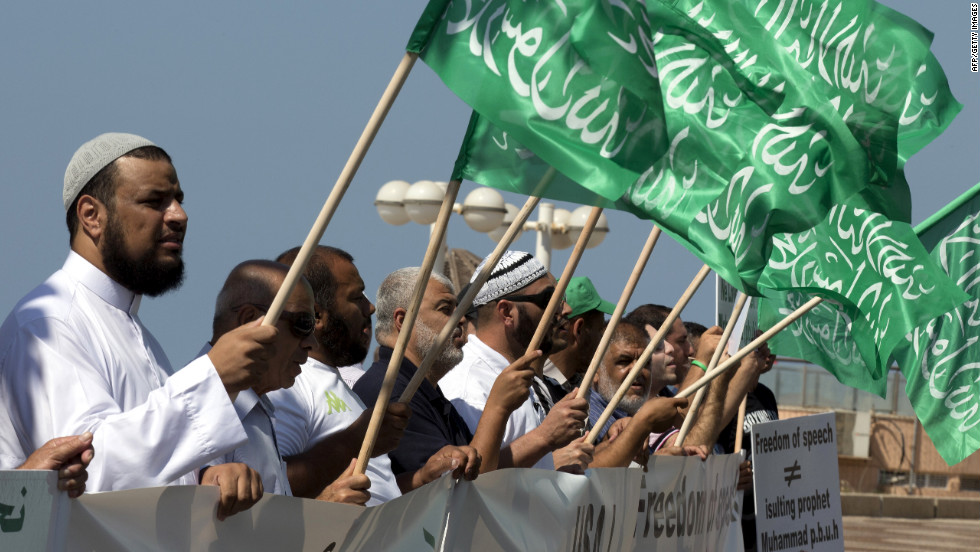 When radicalised Muslims were plotting to behead a random person in Sydney’s Martin Place, The Greens blamed Australia’s military engagement in the Middle East increasing the terror risk at home.

When Australian police raided known Jihadist terror plotters across Sydney and Brisbane in September 2014, instead of recognising the role of Australia’s counter-terrorism efforts, The Green-Left Weekly accused the raids thus:  “to make a public statement, not to protect the community. You do not need 800 police to detain 15 people, however, it does help to make a dramatic media story.”

Muslims Omarjan Azari (19) and Sulayman Khalid (20) were both charged with conspiring to commit a terrorist act.

“The Prime Minister must focus on making sure all Australians are included in our wonderful multicultural society. The problem isn’t Islam or Christianity, it is the discrimination and hatred that drives social isolation and violence.”  – Christine Milne, September 12, 2014.

Yesterday, Australia’s counter-terrorism police stormed four Muslim properties in Sydney’s Islamic south-west, as part of the Islamic anti-terror crackdown.   Police with the Joint Counter (Beard) Terrorism Team arrested one bearded man (33) at a property in Greenacre on charges of possession of illegal drugs and prohibited ammunition and intent to jihad.

Another bearded man, a 21-year-old, will appear in Parramatta Local Court charged with a string of offences, including unauthorised firearm possession. 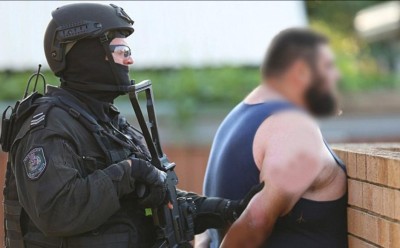 This raid was part of Operation Duntulm, the same operation which saw the arrest of jihadist Mohamed Elomar’s wife, Fatima, at Sydney Airport on May 3 when she was trying to board a flight to Malaysia with her four children.  She had documents showing she was joining her jihadi husband fighting with ISIL in Syria. 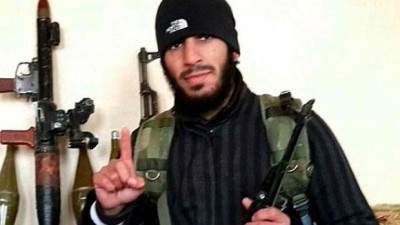 Mr Elomar is believed to have flown to Syria late last year with Khaled Sharrouf (in green runners below), a convicted terrorist, who fled the country on his brother’s passport. 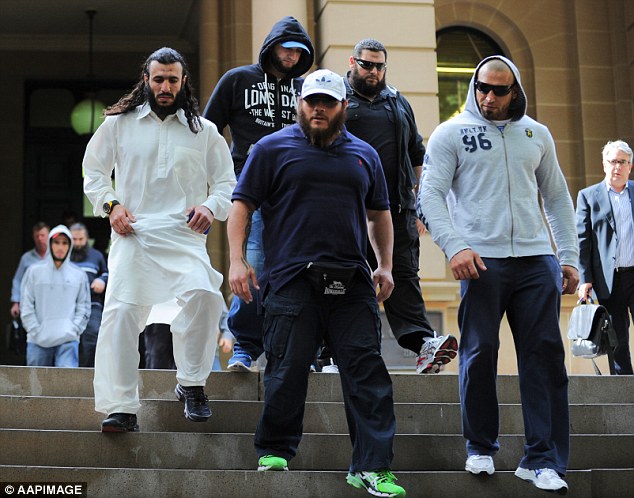 The Muslim community deserves to be demonised, better still, deported.  The Australian Greens need to be monitored for links to terrorist organisations. 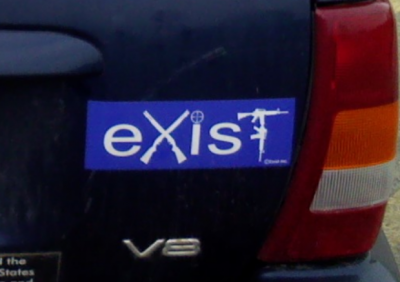