Since 1789, French Liberté, Égalité, Fraternité have underpinned French society which spilled over into Europe and has thankfully formed the basis of civilised Western Society.

The people of Paris and the controversial Charlie Hebdo media belong to our civilised Western Society.  It is their free and safe home, where they have a right to express, to challenge and criticise, religions or otherwise, even if it provokes or offends.

Even after Charlie Hebdo was firebombed in 2011, it continued to publish rude and funny satires mocking the essential ridiculousness of the Islamist worldview.   Citizens have the right to expect that their government protects them from crime, otherwise there can be no civilised society. 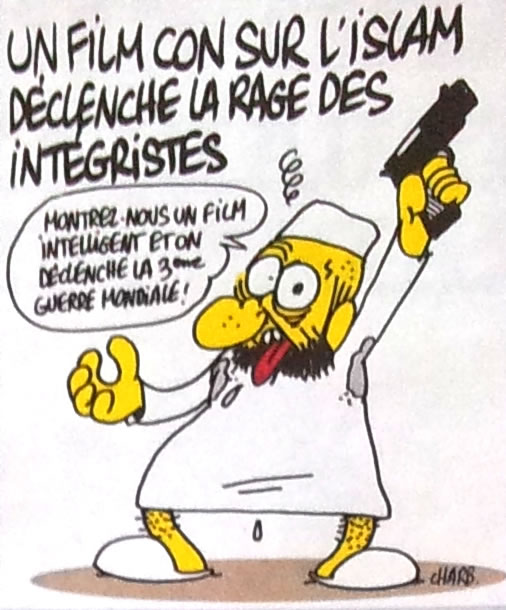 We are not Charlie, but we defend France’s right to free speech and to outlaw all barbaric cults like Islam.

Western Society’s liberal democratic model extends across Western Europe and nations emerging from the British empire – Britain, United States, Canada, Australia, New Zealand and Hong Kong amongst others.  Western Democracy embraces the equality of citizens, the rights of individual citizens to shape their destiny, separation of church and state, free and fair elections, and the equal protection of human rights, civil rights, civil liberties, and political freedoms for all persons, amongst other compatible libertarian values.

But these libertarian values are incompatible with Islam – traditional Islam and reformist Islam.  This is because the tenets of Islam are strictly dictated by the ancient black letter law according to the ‘Five Pillars of Islam’, the ‘Quran‘, and the ‘Hadith’  –  which are each unchangeable and not permitted to be interpreted other than in strict conformity to black letter Sharia doctrine.   The barbaric details of these are readily found on the Internet.

Whereas Christianity has for centuries embraced ‘biblical hermeneutics‘, Islam has many centuries to go before ‘quranic hermeneutics‘ gets any voice.

Western Society’s liberal democratic values since 1789 have received 226 years of refinement and improvement – equivalent perhaps to ten generations and many wars fought in the name of democratic freedoms.

In contrast, Islamic Society is dictated by sharia doctrine – a fixed religious law a prophetic religion that prescribes a strict adherence to a moral code dictating all aspects of individual living and societal behaviour.   Islamic sharia dates back to 610AD when Gabriel appeared to Muhammad in the cave Hira near Mecca, reciting to him the first verses of the Sura Iqra (al-`Alaq), thus beginning the revelation of the Quran.

Islamic Society’s strict prescriptive sharia doctrine is therefore over 1400 years old.  It is the one and only moral code as prescribed by the Islamic prophet Muhammad around 610  and from the writing of the one and only Quran up to 634AD.

Contrary to popular misconception, Islam does not mean peace but rather means submission to the commands of Allah alone.  Quite simply, Islamic sharia is the antithesis of Western Society’s liberal democratic values.  The civilised difference between Western Society and Islamic Society is 1200 years, or more than 40 generations.  That’s a long time and a lot of wars to be fought to refine Islam.

Muslims have a right to subsist under self-imposed sharia dogma in their own uncivilised Islamic Society, but in civilised Western Society, no-one has any right to be provoked in violence against liberal democratic ideals and principles – including against free speech, irrespective of how inflammatory that free speech.  Violent provocation is anathema to civilised Western Society.

Since the Paris attacks, radical Islamist in Britain, Anjem Choudary, tried to justify the Charlie Hebdo attack by claiming that Muslims don’t believe in free speech and that France shouldn’t have allowed the cartoons to be published.

It is up to Westerns societies what to do with Muslims in their midst.   France’s popular presidential hopeful, Marine LePen, advocates stripping Islamic fundamentalists of their French citizenship and deporting them.  She would also like to shut down the mosques in which radical Islamists are being recruited.  Viva la France!

Go further, legislate Islam as an uncivilised illegal cult, and ban its practice across Western Societies.

On Friday, French satirical weekly magazine, Charlie Hebdo, held its first editorial meeting since the deadly attack on its offices earlier this week.   In true French resistance spirit, Charlie Hebdo, will be publishing a “survivors’ issue” coming out next week.  It will be sold outside France.  Sales across Western Society are expected to go through the roof.

Ironically, just a week ago the publication was on the brink of folding.

Defending the liberal democratic values of Western Society in Paris, police stand guard outside the offices of French daily newspaper Liberation as the remaining members of the Charlie Hebdo editorial staff arrive for a meeting.