It was only a matter of time.  Let the Third World scum in and they will bring their numbers, barbarism and violence. 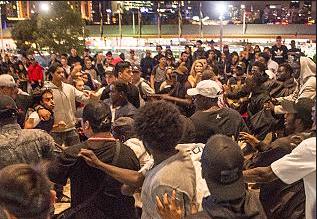 And so it was last Saturday night (March 12, 2016) during Melbourne’s annual Moomba Festival, that black immigrants – many economic refugees demanding Melbourne’s good life and welfare – rioted in armed gang violence through the city streets.  So why do Sudanese have a propensity to riot and loot?

Thank Labor, Liberals and The Greens for inviting black barbarians into Australia.

Deport all the bastards and their families back to the dark places where they came from.  Who needs the scum?

The gangs of male Sudanese and Pacific Islanders brawling centred around Federation Square.  They were all black and only black.  A few copycat Lebs were seen amongst the dark louts looking for a bit of bovver. 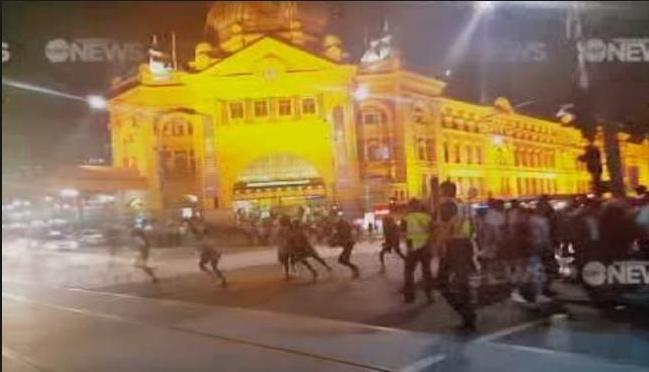 ‘Moomba’ means ‘Up your Bum’ in Aboriginal, but foreign blacks must have taken it the wrong way

Who cares what the gangs call themselves – they’re all foreign criminal Abeds and Coconuts, who have lost all right to be in Australia, as if they ever did.

Not the Immigration Department in Canberra who let the filth in, but state police had to deal with the violence on Melbourne streets.

More than 200 male youths of rival ‘Apex Gang‘ and ‘Islander 23‘ black gangs stormed Federation Square while it was packed with families — chanting “f— the police”, before members started laying into each other, as well as punching patrons in the face and stealing their mobile phones.

Despite social media warnings hour earlier, Victorian Police were unprepared and outnumbered 10 to one, and were too late in calling for reinforcements.

The gang fight was pre-planned on Saturday afternoon by the notorious Apex gang, using Snapchat, a video messaging app. The Apex gang is named after Apex St in the now black ghetto of Dandenong, from where several of its founders hail. They are known to police for their violent assaults, stealing luxury cars and armed robberies.    It is a no-go area at night.

Photos of weapons, including baseball bats, knuckle dusters, machetes, metal poles and knives, were sent out over Snapchat, yet police command and Premier Daniel Andrews sat on their hands. 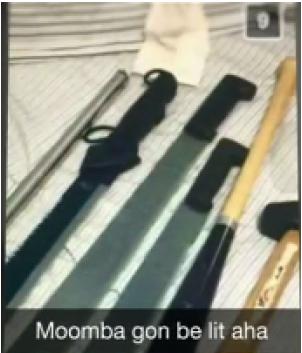 Calls to Triple-0 asking specifically for police were made by members of the public hours before the riot at around 6pm warning that a huge confrontation in the CBD was imminent.  Senior police dismissed the warning as quote “shit.”

The gangs taunted police. Chairs and tables were thrown, weapons were used including chains and a taser.  Cafe’s were raided and there were attempts to loot cash registers.  A police officer was attacked and they tried to get his pistol.

Yet few arrests were made. Why? 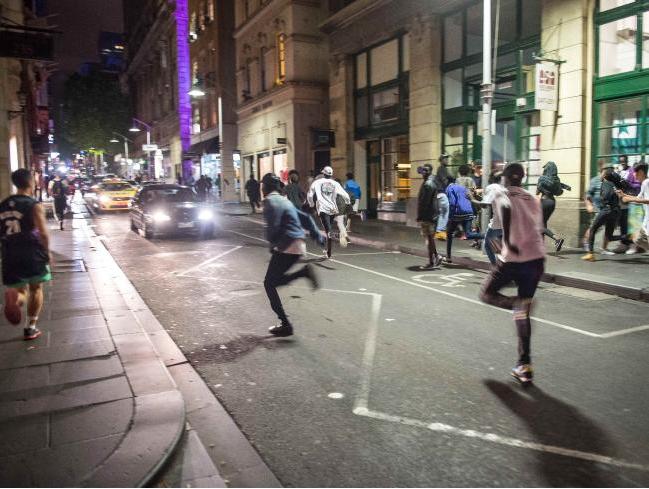 Later that night at 1am, the Pakenham Police station was fire-bombed, probably by one of the gang members.  Pakenham is about 30km from Apex Street.

Why should our domestic police do the job of Immigration anyway?  Importing civil war Muslims was dumb and has only caused a serious ethnic problem undermining the social fabric of urban Australia.

Even Sudanese import Deng Adut in Melbourne, now a refugee lawyer, says deport the violent muddies back to Sudan. 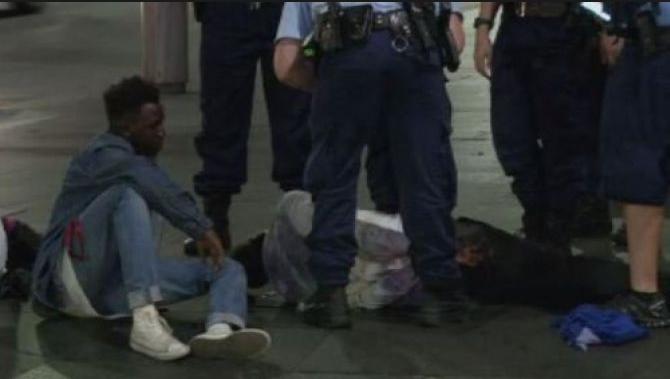 Melbourne has become a dangerous place

Only two months ago on December 27, 2015 in North Melbourne, Africans gangs went on a rampage, attacking each other and wounding police.  At least 250 Africans outside a Carlton nightclub on Queensberry Street about 5:30 am. A police car was damaged and a woman was hit.  Officers were forced to use pepper spray to control the crowd, and four men and a woman were arrested and charged with rioting. 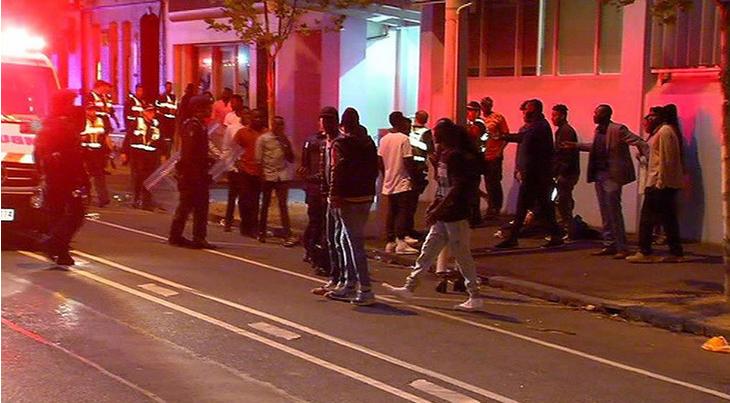 A week prior, outside Kananook Railway Station in Seaford south of Melbourne on Sunday, December 22, 2015, two large gangs of Africans numbering around 200 black male youths battled it out with knives, baseball bats, stones, and at least one samurai sword and a machete.  One of the Africans was stabbed several times and admitted to the hospital with what was described as “life-threatening” wounds. 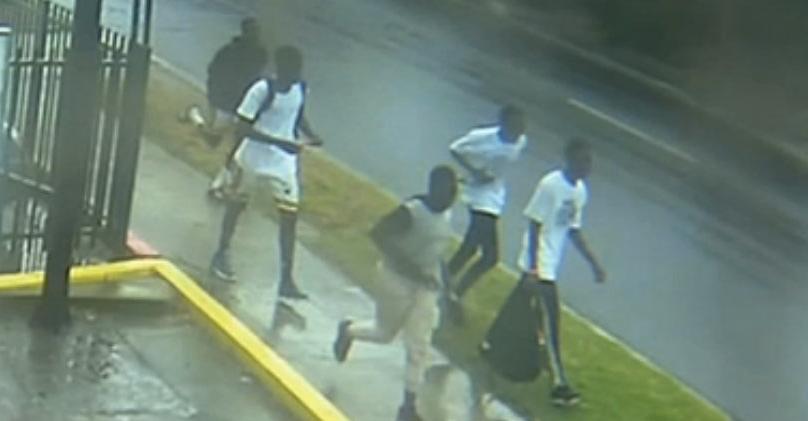 It was over a basketball match.

Typically, the controlled media coverage refused to mention the race of the rioters, although their efforts at censorship were also once again undone by the video and still photography footage of the event.  They were all black.

“Ah the joys and wonders of multiculturalism…. It’s just like a box of chocolates, you never know what you will get.

Unfortunately most of them are rotten, and today’s flavour is – Sudanese Gangs.

Africa is an absolute shithole.  Violent, corrupt, barbaric, primitive.  That’s because it is full of black people, who are incapable of living in a civilised society, ie like the ones that white people create.

So of course the perfect solution to this is to bring them over to Australia.  Apparently when they pass through immigration, these vicious savages are waved over with a “magic wand” to make them suddenly civilised.”

The black foreign gangs controlled Melbourne city streets. Moomba is no longer safe.  Melbourne has gone to the dogs.  It is no longer a livable city. The Third World immigrants living in ghettos in outer suburban Melbourne (typically centred around Broadmeadows, Sunshine, Mooroolbark and Dandenong) have now taken over the CBD at night.

No wonder back in 2013 Sunshine Police got 50 ‘mudfish’ stubbie holders made up for themselves. 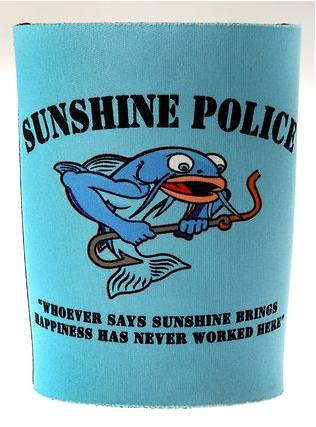 Melburnians need to watch out for roaming black male youths.

According to the Australian Census Bureau, there are some 19,370 Sudanese-born Africans in Australia. Of that number some 5,911 live in Melbourne. Sudanese are by far the single largest black immigrant group in Australia.

If nearly 500 Sudanese were rioting over Christmas in these two incidents, this means that at least 10 percent of Melbourne’s Sudanese took part in the street violence in the space of one day. 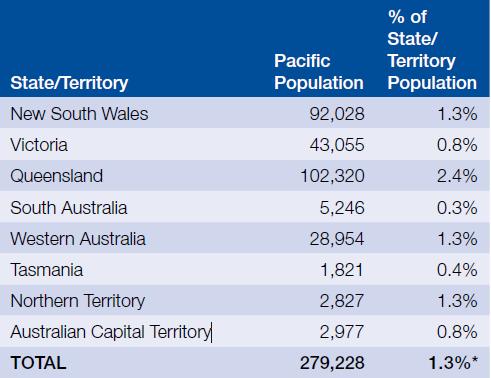 Fix our Criminal and Migration Laws !

Within six months Australia’s urban crime rate would surely be back under control and our gaols almost empty. 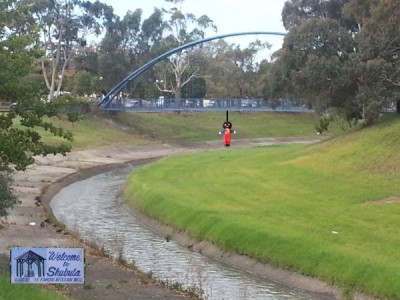