It has been revealed that last month on September 11 that a young man suspected of suffering from Ebola was rushed into the Gold Coast University Hospital.

The 27-year-old man, who had recently arrived back in Australia from the Congo, via Perth, was taken to Gold Coast University Hospital after complaining of Ebola-like symptoms. So out of Africa, he had shared recycled airline  air-conditioning on at least two flights with hundreds of other passengers, and wandered around at least three busy airports – Brazzaville, Perth and Gold Coast.  How many days had lapsed between his arrival and his symptoms developing?  A week?

But the only reason he made it to hospital was not on his own nor that of a GP.  Police said he was arrested for trespassing at a Surfers Paradise highrise and had spent four hours locked up in the Southport Watchhouse before being taken to hospital.

Very few protective precautions were then taken, and none like the condom suits now so frequently seen being donned in West Africa. 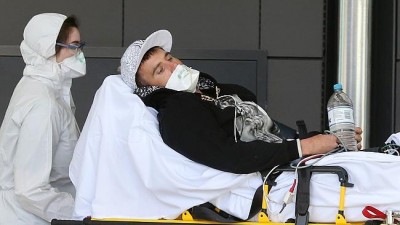 If this patient had really had Ebola, the whole hospital would have been contaminated

But typical of health authorities, Queensland’s Chief Medical Officer, Dr Jeannette Young, played down the risk in the media. It is a government strategy to avoid public panic, to the detriment of serious contamination.

Again, Queensland dodged the bullet, with the man testing negative for Ebola.  Then came the government spin by Dr Young:  “I would like to thank all health and ambulance staff involved in the management of this patient. It was a job well done and serves to show the community that our emergency preparedness plans are sound, and that they can rely on their health services.”

More true to spin:  “I also thank the media for helping to allay the fears and hype in the community – it was a very important message for us to convey.”

Then she declared that suspect Ebola should be treated like flu.  Dr Young said it was highly unlikely Ebola virus disease would make it to Queensland, but said anyone who had travelled to the regions of west Africa affected by the outbreak who were concerned about their health should visit their GP.

Jeannette Young should be sacked for her lax attitude to deadly Black Ebola and for falsely reassuring the public that if Ebola made it to Queensland health authorities are prepared and could cope. 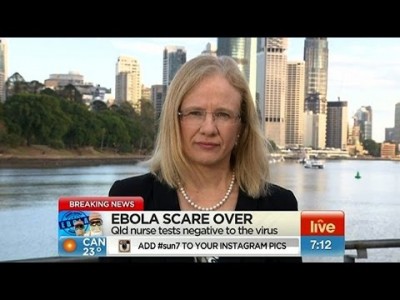 Ridiculously, Australian health authorities continue to remain lax about travellers arriving from Ebola-contaminated West Africa, saying that those who report any potential exposure or symptoms will also be asked to undertake voluntary home quarantine.

“Trust us, and trust Ebola victims to do the right thing in voluntary home quarantine.  I’ll just pop down to the shop. No one will know.”

But not everyone shares the blind faith of Dr Young and her spin doctors.

Queensland Health two weeks ago, stood down two Cairns-based senior doctors for expressing their public health concerns to the media about the Ebola risk.

This month Red Cross nurse, Sue-Ellen Kovack, (56) returned to Australia via multiple airports after treating Ebola victims in Sierra Leone.  Not a risk?    Then days later she displayed a high temperature and so was hospitalised at the Cairns hospital and assessed for Ebola.  She later tested negative for Ebola and discharged from the hospital and asked to spend a further eight days in home quarantine.

But the two treating doctors said the hospital’s infectious disease management and clinical governance in the matter was grossly inadequate.  This suspected Ebola patient was tested for the deadly virus in the busy emergency department rather than in isolation in the highly infectious diseases unit at Cairns Hospital.

The doctors branded as “bizarre” the decision by Queensland Health to test her in the busiest part of the hospital which handles some of the “most vulnerable” patients.

Senior doctors told The Courier-Mail of an internal outcry after plans emerged to keep Ms Kovack for six days in a negative pressure room in the hospital’s emergency department (ED) where up to 200 patients a day are treated.

“It’s appalling. What the hell is going on?’’ said a senior doctor, speaking on behalf of a group of concerned doctors.  “Why’s she is still in ED? It’s the wrong place.

“Lights are on 24 hours a day, medical staff are incredibly busy, and we’ve got a possible Ebola case in a bed in the midst of where we treat our most sick, ill and injured patients.”

The senior doctor said it reflected “the hospital is unable to deal with the situation”.

So the chief executive of the Cairns and Hinterland Hospital and Health Service, Julie Hartley-Jones, sacked the two outspoken doctors.

Spin Doctor Young said: “The major learnings so far is that the case would be easier to manage if the patient was in Brisbane.”

No.  The “major learnings” are that spin doctors have no place when it comes to Ebola.

Federal MP Bob Katter has called for official compulsory isolation of all Australians who come into direct contact with Ebola overseas. He should call for spin doctor Jeannette Young to be sacked for covering up unacceptable public health risks.

If Queensland Health has any public credibility, Cairns Hospital boss Julie Hartley-Jones needs be immediately dismissed for the failure of the hospital to follow Australian Guidelines for the Prevention and Control of Infection in Healthcare (2010) in how it grossly mishandled the suspected Ebola patient and could have exposed many people to Ebola contamination, and for wrongful dismissal of the two whistleblower doctors.

The two whistleblower doctors must be immediately offered full reinstatements to their respective positions with a public apology and appropriately compensated by Cairns and Hinterland Hospital and Health Service.