I noted today a newspaper report where John Kearney, the leader of the One Nation group in the Northern Territory, has also come out against Pauline Hanson’s return (yet again) to lead One Nation. (See below)

Mr. John Kearney is allied to the Western Australian One Nation which has also criticised the cabal of con-men who seek to repackage Pauline Hanson. They make the point that there is also something amiss with Hanson herself. 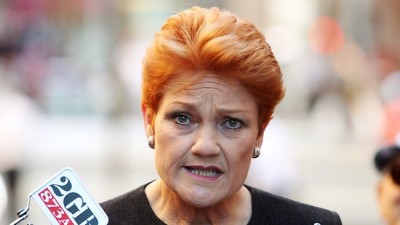 From the point of view of these patriots, One Nation has been shamefully mismanaged over a very long period, with innumerable ex members betrayed, abused, conned, fleeced of funds and abandoned. They cannot but fail to conclude that the leader herself played a role in all this and not simply the useless cabal of persons who now ‘command’ One Nation.

We agree with all this.

It is observed by us that many good patriotic people still feel that the One Nation party should be given another chance – albeit minus Hanson. Perhaps some were working on that until recent days and Pauline Hanson’s ‘return’? Possibly, they might have succeeded in wresting the party off this cabal of nothings and been able to at least create an honest grouping?

Yet, this writer thinks not. Whether or not honest and decent patriots command One Nation is incidental in one way to what One Nation historically has represented. Could decent folk transcend that?

For the Australia First nationalists, we long ago rejected the watery ‘popular-conservatism’ of electioneering spin that is Hansonism.

Pauline (whatever it takes) Hanson

Of course, for many ordinary folks in either voter-land or ‘patriotville’ generally, that doesn’t mean a lot, nor could many at this stage of the evolution of their political consciousness work it out. For those who manage movements or have long been active in movements, it means a lot. Indeed, it is decisive.

Hansonism is a particular thing and One Nation without Hanson, but armed with Hansonism, is pretty much destined for a zero political result.

The zero sums from three errors:

1. One Nation was founded as an electoralist organisation. Everything One Nation does is allegedly about votes and voters and its structure, outreach, and plan of attack is about elections. No mass community movement and no contest with dominant ideas and organisations are allowed. Electoralism supposedly leads to parliament, but whether the aspiring hopefuls ever get there or not, it always serves to keep the hopeful looking at that big ‘prize’ and off the real game – community action, people’s struggle.

2. One Nation’s programme is conservative. That means that One Nation will inevitably assemble allies and friends who tally up to that world-view. In this way, as One Nation has demonstrated very clearly in the last few years, it will serve as a flank guard for the Liberal-National parties. It corrals dissent and demobilizes it.

3. One Nation’s ideology is simply a version of one-time conservative ideology. It is no essential challenge to what governs or ‘rules’ Australia. It is a ‘soft’ message which the electoralists think will actually grab people, those too scared to stand up lest they by physically attacked or verbally smashed up. So One Nation wants to “assimilate” those migrants who could never be assimilated; it seeks no long-term policy of resettlement of those who should not be here and no real denial of entry to ‘refugees’. Amazingly, despite its rhetoric about “Islam”, it even seeks to “assimilate” them! It defines Australian identity as ‘Multiracial” (their words), but rejects multiculturalism. One Nation objects to the fact that Aussies can’t get a house because of Chinese buy-up, but won’t say ‘ban it’. One Nation condemns the China Free Trade Agreement, but won’t struggle against Chinese imperialism. One Nation has a lot of rhetoric, but when one goes into it – the substance isn’t there. After all, hard politics alienates voters???

I do not expect at this stage of the game – as noted – for untutored Aussies to get all that. They ‘hear’ a Hanson message and they ‘assume’ she and they are talking the same language. They are not. The old guard fighters know that and we won’t be conned.

Unlike in the past, many people had reservations about confronting the noble Hanson (sic) who suffered so much. No, it is us who suffer from the façade of Hansonism. We want it gone. We will do our best to bury it.

In that regard, as this article began, some One Nation people have objected to the return of Hanson.

Might it not be time for them to review the ideology and politics of popular-conservatism, of Hansonism itself?

As I shall write again soon, Australia First Party calls upon all sincere One Nation members and supporters to reject Hansonism – and not just Hanson – and to do so ideologically, politically and organizationally. There is no way out for the sincere patriots of One Nation from the imbroglio caused by Pauline Hanson taking charge of One Nation. The door to ‘reform’ of this party – is shut.

To fight on does not mean fighting over the legacy of Hansonism, but it means moving beyond it. In doing so, they cleanse their ranks and themselves.

That act of political cleansing can be facilitated by moving towards Australia First nationalism.