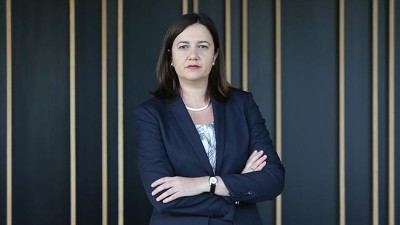 Trust Me.  I am not Anna Bligh.

Palliative Chook’s Broken Promise #1:  “We wouldn’t consider asset sales. Queenslanders do not want their assets sold. There is no starker contrast between Labor and the LNP. Labor will not sell your assets, pure and simple.”

A month after the election, Palaszczuk has begun to fine-tune her government’s opposition to the sale of public assets.

Apart from general statements in support of public education, hospitals and housing, Palaszczuk made no specific commitments during the election campaign to halt the Newman government’s attacks on the public provision of these services.

Now its only the “major assets” that won’t be sold.  Palaszczuk’s government has admitted that it will sell some state assets like land and buildings.  Or is it just not the “strategic assets”. While ruling out the sale of “strategic assets” such as electricity and ports, Palaszczuk has now indicated that land and property sales are on the drawing board.

Deputy Premier Jackie Trad has since insisted Labor was keeping its word: “What we said was that we would not sell assets that deliver dividends to the Queensland state budget.  What Labor committed to at the Queensland election was not selling our strategic assets.”

We are not as bad as Campbell Newman..yet.

Palaszczuk has spoken to media to quickly confirm she was holding talks with cross benchers.Cross benchers – independent Peter Wellington and Katter Australian Party MPs Rob Katter and Shane Knuth had requested meetings. “And I am more than happy to sit down and have a chat with them, as I have done the last three years,” said Palaszczuk.

She said she was going to talk to Peter Wellington and offer him stability of leadership and making sure they have integrity and accountability in their government.

Palaszczuk has started negotiations with Katter’s Australian Party – which could include commitments to mandating ethanol in petrol and shifting infrastructure money to the bush – in a desperate bid to cling on to power.

Days after the election, newly elected Labor MP Billy Gordon revealed an extensive undisclosed criminal history and allegations he had bashed his ex-partner.  Palaszczuk accused Gordon of dishonesty and demanded he quit parliament.  “It is a past that isn’t pleasant and it’s a past that was kept from me and the deputy premier. I’m appalled and I’m shocked and I feel sick to the stomach. There is no second chance.”

Palaszczuk acknowledged the decision could see her lose her premiership, but said Mr Gordon’s position was untenable. “Integrity is fundamental to any government that I lead.  Today I am prepared to put my premiership on the line.”

Now, Palaszczuk will now rely on the vote of Cook MP Billy Gordon to ensure she has the numbers to govern. “His future was a matter for him.”   Labor Minister Jo-Ann Miller told the media, “Look, he has also said that he is going to support Labor in the Parliament and I just think the decision has been made now and we all need to move on,’’ Ms Miller told 4BC radio.

Next:    “This government will not do anything that will drive up household electricity bills.“

The Richo Manifesto for the Labor Party prevails.