On this day a hundred years ago from King George Sound, Albany, West Australia, Australian and New Zealand troops departed in convoy initially bound for Europe to fight for our freedom in The Great War.

After the outbreak of The Great War in Europe in 1914, once England declared war on imperial Germany on August 4, against Germany’s invasion of Belgium, unreserved support from British colonies was offered with commitments of available men.  Australians and New Zealanders were up for getting stick into The Hun with gusto.

Albany had been selected as the most convenient embarkation port for the first two collective troop convoys to congregate, due to the generous sheltered anchorage provided by King George Sound and the available bunkering facilities. 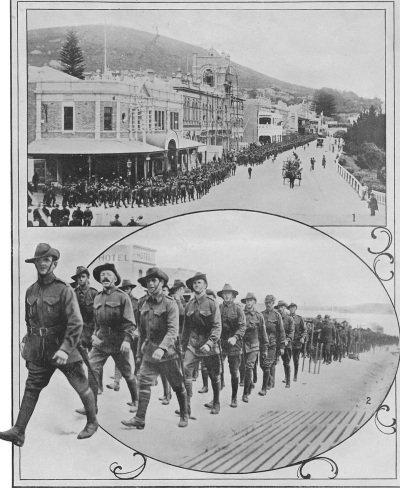 The ANZAC Fleet was the largest fleet ever assembled in the Southern Hemisphere. 10,000 men from New Zealand in 10 transports joined together with 28 Australian troop carriers carrying 20,000 men, and 7,477 horses. Only at Albany were all the ships seen together.

So it was that on Sunday November 1, 1914 at 5.45 a.m the first convoy of transports departed Albany for war preparation in Egypt.   The convoy was lead out of King George Sound by H.M.S. Minatour followed by H.M.A.S. Melbourne. and the Orvieto followed by several transport ships laden with the ANZACs, their mounts and muntions.  The ships sailed off under brown smoke towards the west in Indian file passing by Breaksea Island, one of the last of Australian soil that many of them never saw again. 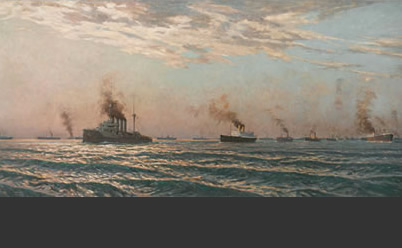 First Convoy at Sea (1920), oil on canvas by Charles Bryant

The first meeting of the Australian and New Zealand forces is aptly described by Major Fred Waite, author of  The New Zealanders at Gallipoli, as:

“Thirteen days after leaving Wellington the New Zealand ships crept into the spacious harbour of Albany, Western Australia. Here were gathered innumerable vessels of every line trading in the Southern oceans. Not painted uniformly grey like our ships, but taken in all their glory of greens, blues and yellows, they rode on the calm water of King George’s Sound packed with the adventurous spirits of the First Australian Division. The cheering and counter-cheering, the Maori war cries and answering coo-ees would have moved a stoic. Young Australia was welcoming Young New Zealand in no uncertain manner in the first meeting of those brothers-in-arms soon to be known by a glorious name as yet undreamed of.”

Two months later a second convoy departed King George Sound for the Middle East. The 54 Australian and New Zealand ships of these two convoys carried a total of 40,000 soldiers and nearly 17,000 horses.

The Federation of Australia was only thirteen years old and this was the first time Australians fought and sacrificed their lives as Australians.  Six months later following training in Egypt and the Middle East, the ANZACs were landed at dawn on the beaches of Gallipoli, Turkey on 25th April 1915.

From November 1914 to May 1919 a total of 243 Australian and New Zealand troop and hospital ships called at Albany, both outward and homeward bound. Sick and wounded soldiers were treated at Albany Hospital. Unfortunately a some died and are buried at the Memorial Park Cemetery, Middleton Road in Albany. 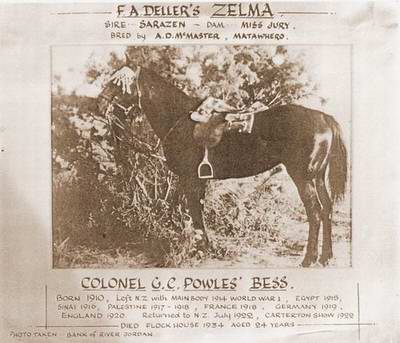 “Bess” was the only horse to leave New Zealand in 1914 and return at war’s end – the personal mount of Colonel Guy Powles.  A joint memorial honouring the Australian Light Horsemen and the New Zealand Mounted Riflemen is located at Albany overlooking King George Sound.

They shall grow not old, as we that are left grow old;
Age shall not weary them, nor the years condemn.
At the going down of the sun and in the morning
We will remember them.

Albany is home to the Anzac Dawn service, Anzac Day and the last image so many Australian soldiers had of their homeland, lest we forget..