Another civil war, another United Nations failure. But is it?

The United Nations’ Agenda 21 is actually on track.  It is all about driving the Third World to migrate out of poverty by fleeing to the ‘rich’ First World.  It is Ban Key Moon’s Agenda 21.  Tragic images like the one above have instantly triggered global media responses and spontaneous First World door openings to tens of thousands of economic migrants wanting a better life in Europe.

So-called ‘refugee advocates’ have frothed over the above photo.  It has gone viral and has been used as a symbol of the plight of Syrian refugees trying to reach Europe.  Refugee advocates co-ordinated compassionate ‘Light The Dark‘ candlelight vigils over the weekend in Sydney, Melbourne, Adelaide, Perth, Darwin and Hobart to welcome up to 50,000 refugees to Australia and honour the life of one Syrian toddler Aylan Kurdi.

But the emerging truth is that the toddler’s father Abdullah Kurdi was a construction worker safely employed in Turkey who enjoyed public housing for his family.  Muslim Abdullah voluntarily borrowed $14,000 from his sister living in Canada, Tima Kurdi, to fund people smugglers to send his wife and children into Europe before his own arrival in order to fraudulently apply for backdoor refugee status as a lone Syrian woman with two children.

Tima Kurdi explained. It was her brother’s dental trouble. “The situation is that Abdullah does not have any teeth,” she said.  “So I been trying to help him fix his teeth. But is gonna cost me 14,000 and up to do it…” He was never in a war zone, never persecuted and never a refugee.

The power of one photograph eh?   Propaganda reigns! 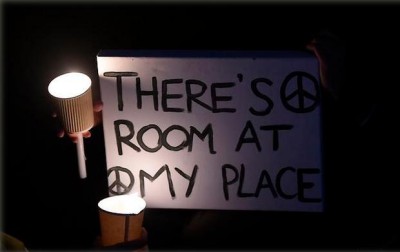 They are all on an Angela Merkel Exodus to Germany because Merkel’s Germany currently offers the best welfare asylum packages in Europe.

“The objective of Agenda 21 is the alleviation of poverty, hunger, sickness and illiteracy worldwide while halting the deterioration of ecosystems which sustain life.” – UN Declaration in Rio, 1992.   Agenda 21 seeks to promote world government through the creation of “a centralized planning agency to be responsible for oversight into all areas of our lives.  It  is an amalgamation of socialism and extreme environmentalism with strong anti-American and anti-capitalist overtones.   the elimination of private property ownership, single-family homes, private car ownership and individual travel choices, as well as family farms.

What is the UN Method?  Facilitate relocation of the Third World to the First World.  Western Europe is perceived a being rich and Germany the richest.  It is global social re-engineering and communitarianism in which nation states hand over their sovereignty to a world government – the UN.

So lure the world’s Third World and especially civil war-torn muslims to become refugees to Europe. This kind of mass-migration fraud is a medieval war strategy and it’s called ‘Hijrah‘. It’s part of jihad. 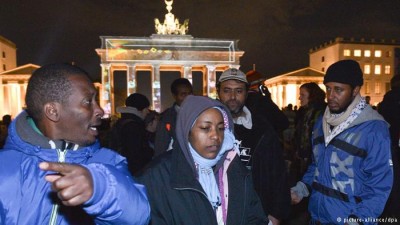 “We can build our new mosque here” 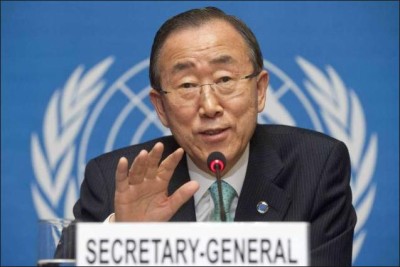 Merkel imposes 800,000 Arabs and a Refugee Levy on her fellow Germans

Angela Merkel is to levy a tax on all German citizens in order to fund the privilege of observing Germany’s so-called “international obligations” to accept refugees. Some 800,000 Arabs are set to be “admitted” into Germany this year, representing 1% of Germany’s population.  Such influx is otherwise recognised as ‘invasion’.

Agenda 21 prescribes unto Arabs, “Leave your country, your people and your father’s household and go to the land I will show you. I will provide you with 359 euro a month, free council housing, free schooling for your children, an abundance of jobs, plus funding for food, pocket money, essential toiletries, minor purchases, clothes and shoes, electricity bills and transport.. and the same access to primary, secondary, tertiary and vocational education and educational allowances as German nationals.  Germany is your Promised Land.”

..and behold, it has been a very good pull factor for the world’s Desert Millions. 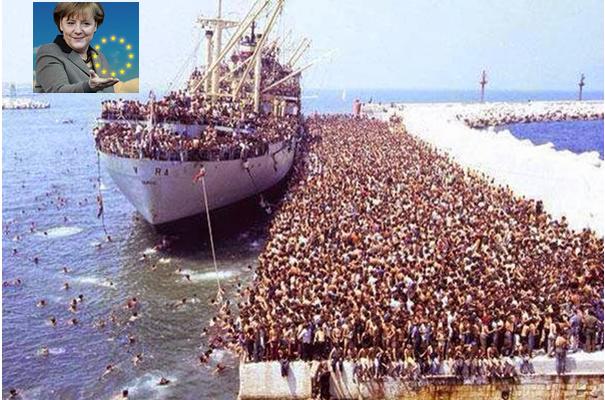 You beauty!  We’re calling ourselves refugees and outa here!

Claims have been made by certain arch-capitalist economists and commentators, that the new refugee wave will contribute to a great “opportunity” and spur enterprise. Then why didn’t the previous waves of them do that? In truth, they will be a permanent drain upon the German Nation. 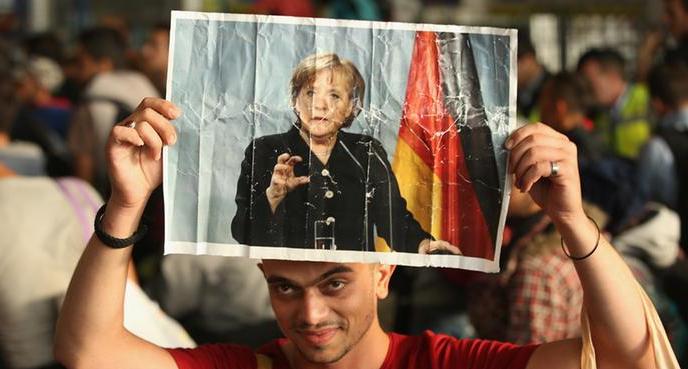 The only responsibility the German state has – is contributing to the criminal wars in the Middle East which have stirred up some of the current horde. In truth, German military forces should help solve this crisis.

The refugee influx into Germany has encouraged massive public anger. The National Democratic Party of Germany (NPD) is directing much of the people’s protest.

Now the German state wants – again – to ban the NPD.

“Alarm bells should now be ringing,” said the head of the Council of Europe, Thorbjoern Jagland, in Strasbourg, adding: “Democracy is increasingly endangered by the hatred motivated by racism and xenophobia.”

Democracy endangered? It is the people who are demanding an end to the refugee invasion.

An attempt to ban the NPD failed in 2003 and another which tried to link them to a small cell of neo-nazi terrorists languished when it was shown these violent idiots were connected in some ways to Germany’s Constitution Police – its internal political police!

The German state will try again.

Australian nationalists stand with their German friends against democratic repression. 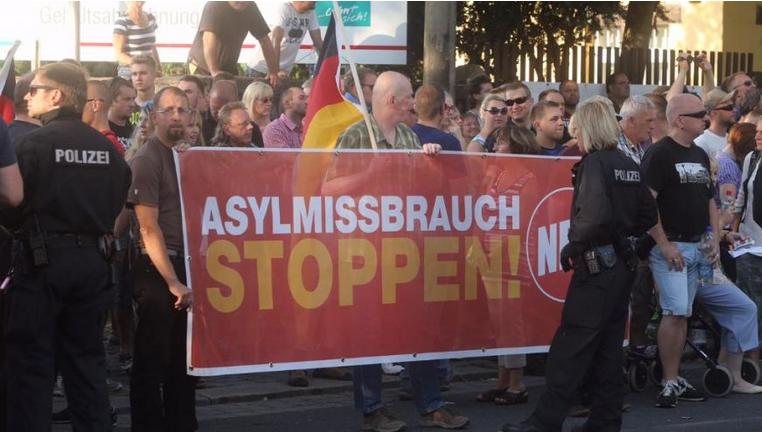 July 24, 2015: Ordinary German citizens hold a sign ‘STOP MISUSE OF ASYLUM‘ as they protest against a tent camp for refugees in Dresden, eastern Germany.

In Australia, it does not surprise Australia First that Barnaby Joyce would advocate a massive intake of so-called ’refugees’ from Syria.

Joyce has pressured PM Tony Abbott to accept 20,000 Syrian economic illegals, simply on the basis of a photo of a drowned toddler.  This will be in addition to the 4,500 Syrians already granted asylum by the Liberal Government plus the $155 million of Australian taxpayer wealth already gifted to the Arab Spring Crisis.

Meanwhile Australia’s own homeless and Aboriginal people continue to experience poverty, squalor and health below that of the Third World.

In the past, Joyce has been on the side of just about every anti Australian thing imaginable. He is known to do a dance occasionally about his criticism of this or that, then he caves in. If it’s not the Murray Darling Basin water scheme, or the sale of Australian farmland to China, Joyce can be counted on to roll over.

However, this time around he has been right up front. How will it go down amongst Australian farmers and country people who often do hold to traditional values and ideas.

Does Joyce now think these ‘refugees’ will invigorate rural Australia? Or work as cheap labour on the great farms owned by the Chinese master race? Or slave away on the properties of a few collaborators with Chinese imperialism?

Joyce has supported the criminal policies of our government which has undermined the Syria of President Assad. In that sense, Joyce bears a responsibility for any outpouring of people. The solution is not to bring anyone here, but to arm these people and feed these people, for their own survival. 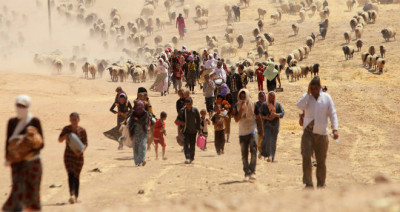 “Let my people go, so that they may hold a beer festival in Munich”

We also take a rather negative view of these so-called refugees. Rather than stand and fight, take up arms, these people prefer to flee, not just to a country next door for temporary respite – but far away where a ‘better life’ can be had. They are cowardly persons, not heroes.

Can one live in a war zone? It is known that tens of thousands of Russian civilians lived inside the hell of Stalingrad. Why can’t this lot live where they are until the war is decided?

Joyce also ‘warned’: “It was important that Europe and Australia assist people who are “under the pump”, but that the intake needed to measured or else “it will inspire those right-wing movements, and that is very dangerous”.

Indeed it might. However, from our point of view it is the Barnaby Joyce type who should pay the price of their folly. It is the view of the nationalists that all refugees back over decades be returned home progressively and with protection and assistance – whether it is really needed or not.. To fund this and to give incentive to them, we will seize the property of all those who have caused the problem to exist here, every dollar of ‘super’, every bank account, every house, car – everything. The ‘refugees’ are welcome to it.

“..But the desert lot were exceedingly fruitful; they multiplied greatly, increased in numbers and became so numerous that the land was filled with them.” 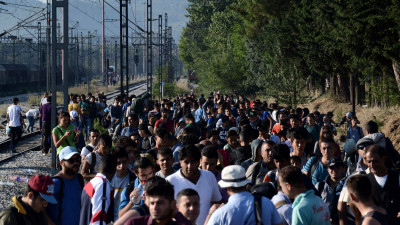 Barnaby Joyce calls for another 20,000 Syrians to be resettled in Australia permanently on welfare