The Greens image implies environmental conservation, but that is their deceptive electoral lure.  In Sydney’s concrete inner urban Marrickville, one can almost count the number of verge trees, so why are the Greens set up and so vocal there?

It is the ideology of the overpaid Green activists who in the main live off the taxpayer teat in true Marxist tradition.  They want more of their kind around them in Marrickville to build a stronghold for the Left.

Since Bob Brown left them alone with Milne and Hanson Young, the party has been infiltrated by disaffected Labor Lefties.  So what ideology do The Greens subscribe to behind their targeted electioneering slogans?

Marxism and Sexual Bolshevism is Greens ideology mix, so they have become just a misnomer fringe party.

Not a bloke in sight

Greens “Pro Choice” is all about legalising homosexual parenting, so that lesbians and homosexual men may legally adopt children and pay for surrogacy to have children. Pity the innocent children, especially the Third World ones.  Homosexuality is a primary perversion promoted in a loose society, under the innocuous guise of “tolerance”, “equality” and “diversity”.

So far from Green conservation and No Dams, this perverted mob deserve to come out with a new honest colour scheme beside green: 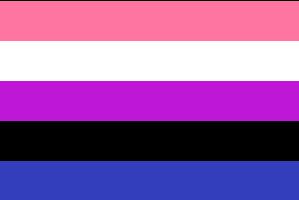 The Genderfluidity pride flag
Lovely, should scare the kids.

And The Greens “Refugee Rights” is all about opening up Australians to mass immigration from the Third World – with baggage like welfare dependence, demand for our already overstretched infrastructure, genuflecting of their backward cultures legally enshrined under multiculturalism, and their third world diseases to kill off us locals just like the what happened to the Abos.   It is about foreign displacement of Australians and it is patently hang-able  treachery.

Greens “Reject the anti-Muslim Hysteria” is all about excusing Jihadists as our alienated radicalised young men ” feeling really isolated, angry and vulnerable”.  Poor luvs!  It is about making Australians embrace multiculturalism and imagining ‘moderate’ Muslims reject their Jihadist cousins, and instead blame Australia’s fighting of ISIL causing Muslim resentment.   The Greens are calling to “demilitarise” Australia and for Australians to go hug a Muslim.

Greens “Fight Against Ebola” is all about sending Australian official teams of scientific, medical and humanitarian personnel to their deaths to fight Ebola in West Africa.  There is no though to cost, training, infection, treatment.   It is a death sentence and Christine Milne ought to lead the way with her Leftist nutjob Emily Lister in dress boots, Tanya Plibersek.

Greens “Embrace Multiculturalism” is all about more foreign votes for The Greens since so many Australians have abandoned the party as extreme socialists who have become anti-Australian.  They call for an Australian Centre for Social Cohesion (ACSC) to control government immigration and foster foreigner rights over Australians. Somehow letting in barbaric cultures and hugging them can prevent homegrown extremism.

Greens “Carbon Tax” which did absolutely nothing to stem Climate Change and everything to push up the cost of living for Ordinary Australians.

Greens “Bike Plan” for Marrickville, which is pie in the sky and will lead to more cycling deaths.