Typically in Sydney and surrounds this foreign corporate chain of stores employs mainly Sri Lanka asylum seekers, otherwise revealed as illegal economic migrants. Some have connections to the Tamil Tigers. Or else you only find foreign students there and rarely, if ever, local Australians.

Subway has 1300 stores across Australia funding employment for foreign workers on Student Visa subclass 500.  There is a cosy employment arrangement between Australia’s Department of Immigration, Centrelink and Subway.  In fact go into any fast food outlet and play ‘Spot The Aussie‘.  Good luck, they’re all foreign ethnics at Maccas, KFC, Oporto, Hungry’s, and of course at all da asian and kebab grease joints.

So buying from Subway means you are encouraging foreign scab labour and denying local Australians a job at a normal takeaway like a fish and chip shop or pie shop.

Subway underpays its foreign student workers anyway. In 2009, Indian student Prateek Sahni employed at Subway’s Melbourne CBD store was not paid for a week while on a so-called “trial”.  Trial is indefinite. 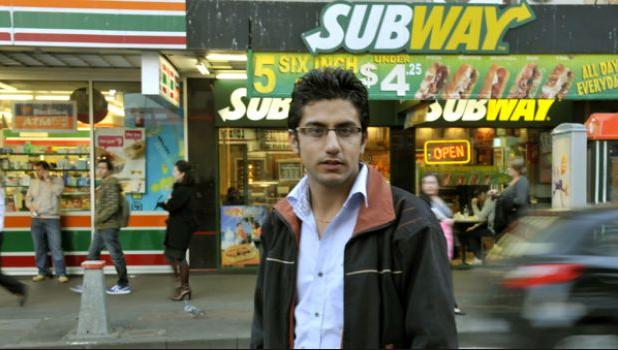 Ever see a Third Worlder wash its hands after squating on the loo?

Sahni said he knew of at least five other students who also had not been paid. But then the manager was foreign as well, one Arab, Biltan Besim.  The franschisee owner, was also foreign, African connected Kaba Investments.  Foreign cultures, unAustralian values.

The food is not all fresh – the meat is halal and highly processed.  It has a shelf life almost as long as KFC, another foreign fast food chain.

Subway’s chicken fillet for instance was found to have breach Australia’s advertising code in 2012 because it was not chicken fillet.  The white rubbery looking object is made up of processed meat, shaped together to look like a fillet, and not in fact a genuine chicken fillet, as its Chicken Fillet Sub product suggests.

Bowel cancer, heart disease here we come!   The millions in profit go overseas, so what do they care?

The meat is subject to bizarre halal and kosher rituals, so by the time the highly processed meat reaches the store, it has little resemblance to the animal.

Subway even duds is franchisees. In 1995, Subway’s owners were held liable for breach of contract and franchisees in Illinois USA and ordered to pay $10 million in damages for its lease and contract violations.

In 1989, the U.S. Small Business Administration refused small business loans to Subway franchise owners until Subway removed a contract clause which gave it power to seize and purchase any franchise without cause.    A subsequent investigation into Subway between 1992 and 1998 found that,

“Subway is the biggest problem in franchising and emerges as one of the key examples of every abuse you can think of.”