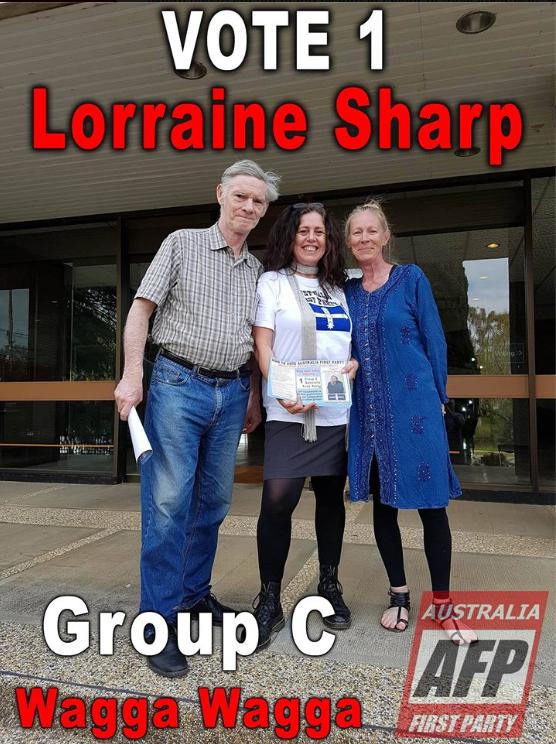 Lorraine (in blue) is being helped out at the pre-polling booths by upcoming Werribee council candidate, Susan Jakobi. Sue traded her high heels for some good quality Dr Marten boots in the anticipation of Lorraine stomping home to a record poll.

Beside her is Des Lang, whose ties to NSW politics goes back yonks. He drove to Wagga to help Lorraine and Susan hand out how-to-vote cards for the pre-poll. 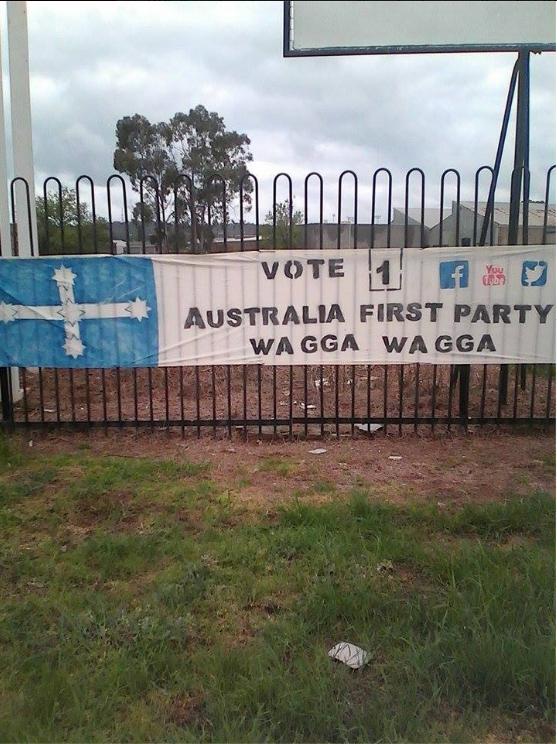 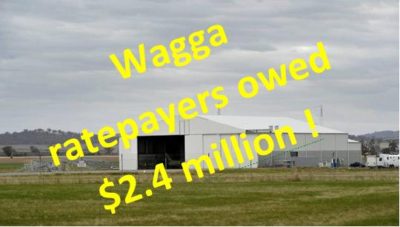 Then there is the smear and the game-playing behind the scenes, like the bullying by Palmer United Party’s Lex Stewart during the 2013 Federal election campaign who violently attacked Lorraine and her daughter at pre poll.

The Wagga Wagga City poll on Saturday is a contest between Kendall’s China money clique and Australia First Party.  While Wagga Wagga will be by-passed by the fast-train project that will see eight new Chinese cities built between Sydney and Melbourne, there is still the possibility of coal seam gas mining in Riverina and other sidelines which will profit the money clique.

By all accounts, the Wagga locals are already super supportive of Lorraine’s campaign, sick as they are of the “old boy” money network which favours foreigners (especially refugees) over Aussies. Yep, those grubs are just itching to accept big bags of filthy lucre off imperialistic Chinese developers.

As one Green said – Lorraine Sharp is “an outside chance to win”.

So, people of Wagga Wagga, as polling day is tomorrow bear in mind that your vote will mean the difference between an Asian future for Wagga, where you’re cut out of the picture in favour of “new Australian” workers and residents, or a candidate who in no uncertain terms will take it to the traitors in chamber and proudly stamp a boot marked “Made in Australia!” down on the lot of their greedy heads!

Lorraine Sharp will stand up against the good ol’ boys on Council who have wasted your funds on treason like the China Trade Centre and the Douglass Aerospace fiasco.

Community and family involvement to save addicts.  Council should sponsor civil action by mass applications for Involuntary treatment via the NSW Drug And Alcohol Act 2007. The law is at: http://www.health.nsw.gov.au/mentalhealth/Factsheets/Pages/default.aspx#mh

Drive out the dealers!    Save our youth!

An end to the refugee welcome zone and its anti-Australian politics.

Continuing the current globalist model will be the end of Wagga Wagga as we know it.

A Council plan for community and local business development would restore prosperity and a healthy stable city.