Australia’s last steel makers, Bluescope and Arrium, are under critical pressure from the flood of cheap import dumped steel from China into Australia.

Cheap Chinese steel has decimated Australian steel industry’s fair market share. Australian industries pay decent Australian wages and operate and deliver at world’s best safety and quality standards. Yet under the China-Australia Free Trade Agreement (ChAFTA), trying to keep your decent job in Australia is only going to get harder.  Many Aussies who thought their job was safe have recently found themselves on the Free Trade scrap heap.  We’re being dumbed down to the Third World hazard standards and commensurate slave rates.

BlueScope has been forced to cut production at Port Kembla and is set to sack 500 Australian workers. But Cheap Chinese Steel is so pervasive and unchecked that BlueScope could shut down the steelworks altogether, which would see Australia lose annual production of 5 million tonnes of steel and permanently 10,000 Aussie jobs. 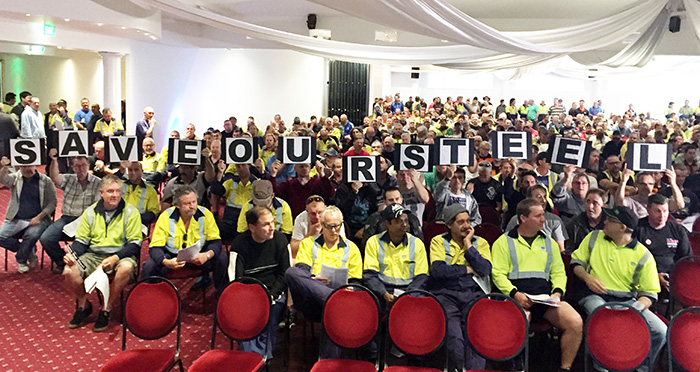 We voted Labor, then in desperation we vote Liberal, only to be let down just the same.

Wake Up Australia, LibLabs are the same!

So another world-standard manufacturing industry is set to be lost by Australia to the Third World because of naive the neo-liberal ideology of “Free Trade”- shared by Labor and Liberals alike.  Remember Fraser and Whitlam became best political mates.

What is the Liberal-National Party Government doing about?

Instead they’re flogging more free (unfair) trade with China, South Korea, India, the Trans-Pacific Partnership and with anyone who is not Australian.

The Liberal Party in Victoria is to spruik its support of the China Australia Free Trade Agreement (ChAFTA) with massive advertising campaign paid for by Australian taxpayers (those of us who are left).   The ads will suggest that those unions which have doubts about whether Chinese contract labour will flood the country – are racist.

He’s one of the Liberal ChAFTA propaganda ads: 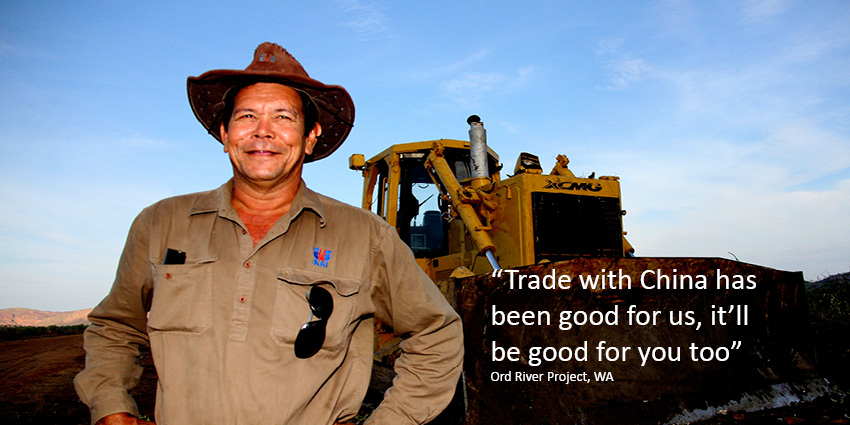 Yep, he’s Chinese.  The advert has been hocked from the Australia China Business Council website.  It is a doctored image from the Shanghai Zhongfu Group based in Shanghai which owns Kimberley Agriculture Investments and 13,400 ha of our taxpayer-funded irrigated Ord River Scheme.  But it’s 100% Chinese run by chief Jian Zhong Yin.  All produce will go direct back to China, tax-free!

Good for Chinese. Even the XCMG dozer in the background is Chinese.

The ads will do something else. This time the Liberals insert a whole new issue of social engineering into their propaganda.
A ‘normal’ family dismisses the unions’ claims. Mum, dad, junior – and his Chinese girlfriend.

Clearly the girlfriend is important to the advertisement as she features strongly and is assured by the family that the nasty unions will not prevail. That can only mean that it is some sort of social engineering issue. The Chinese person is seen as the target of a proper and argued campaign about jobs. We would say that this interpretation of the campaign is quite wrong, but there it is. So what does it mean?

Strange stuff. Indeed, it is racist in its own way. It makes an assumption that this sort of family is superior and more righteous and more economically tuned in – than others.

The Liberals are obviously all for this ChAFTA. All patriotic Australians should oppose it. 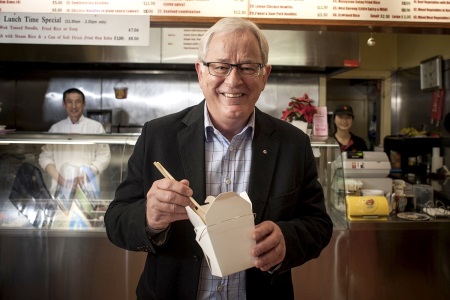 Here’s the story as reported in the Sydney Morning Herald Oct 4, 2015…

“Labor’s leader says his higher education reforms, and China FTA amendments to protect Australian jobs, are the points of difference between Labor and the Coalition.

The Liberal Party is set to raise the temperature in the fight over the China Free Trade Agreement, with attack ads that accuse “ratbag unions” of stoking racism against the Chinese.

The TV campaign is due to be released later this month, but a leaked copy of a script, obtained by Fairfax Media, shows the Liberals will pull no punches in attempting to counter the expensive anti-FTA campaign sponsored by the CFMEU and other unions.

The ads, paid for by the Victorian branch of the Liberals, will complement a $9 million government campaign promoting the deal. Trade Minister Andrew Robb has handed nearly $7 million to media buyers to place publicly-funded ads on TV and in print.
“We ask the question of whether this a racist attack on the Chinese”: Michael Kroger, Victorian Liberal president.

“We ask the question of whether this a racist attack on the Chinese”: Michael Kroger, Victorian Liberal president. Photo: Justin McManus

The leaked script shows the Liberal Party’s ads begin in a “suburban living room” with a 20-year-old Australian man on the couch with his arm around his Chinese girlfriend.
Advertisement

The couple are watching the union attack ads on TV with the man’s parents.

Father: They’re at it again

Father: A ratbag union in the building industry is running racist TV ads against the Chinese. Last year Bill Shorten was attacking the Japanese

Father: But some unions have been running racist campaigns for years

Son: Why doesn’t someone stop them?

Father: Bill Shorten should stop them.

The leaked script says the ads end with the slogan “Free trade is good for Australian jobs”.

Victorian Liberal president Michael Kroger told Fairfax Media that the ads had been designed to address an “undercurrent of racism” in the union campaign, which claims Australian jobs will be threatened by the FTA.

“We ask the question of whether this a racist attack on the Chinese. We ask that question,” he said.

“These kind of pathetic insults prove the Liberals are losing the economic argument,” he said.

Mr Shorten also took aim at the government unleashing a taxpayer-funded campaign before the enabling legislation to progress the China FTA had passed parliament. 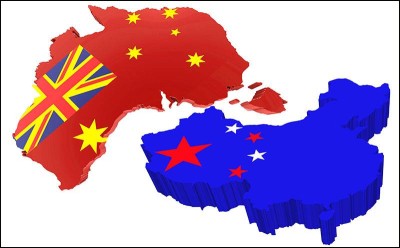 Joined at the hip