Australia’s national government budget 2014 was delivered in May 2014 by Liberal Party Treasurer Joe Hockey on the much hyped overriding pretext of paying off Labor’s massive government debt.

Hockey has used the Liberal electoral landslide win after six years of Greens-Labor Party government as a mandate to impose Liberal Party ideology and policy.  There is little evidence of the Nationals having had much input into the budget.

The LibLab pendulum has swung Centre Right and predictably Liberal Party Treasurer Joe Hockey has signalled wide-ranging cuts in the national budget, warning that all Australians will have to do the “heavy lifting” – a euphemism for austerity.  “Everyone is going to have to make a contribution – big business, small business, all people from all demographics across the community.”

The current justification for austerity is the Liberal Party’s Commission of Audit exposing the financial state left behind by Rudd-Gillard excesses.  Australia’s two-party pendulum analogy is apt.

The current Liberal Party premise is that it has unfairly inherited a high national debt from Labor.  Also, Labor’s previously budgeted public expenditure is excessive (like a “tsunami coming across the water”) and so is unaffordable and must be curtailed.

“Unless we take immediate remedial action in the budget, then Australia will never have a surplus,” Hockey says.  “The fact is we have to address this and address this fast.” – fact? opinion? Liberal hype?  Liberal alarmism or frugal prudence?

Well it points to being just alarmism, when hypocritically the Liberals have between the election and the budget announced massive discretionary spending outside their pre-election public promises.

Abbott’s Liberal government announcement on April 22, 2014 to spend $12.4 billion on 58 United States built F-35 Joint Strike Fighter jets for the Air Force, was not a pre-election commitment.  It is completely a Liberal Party discretionary spend of considerable size, and indeed will become Australia’s most expensive Defence asset, at time when the Liberals are hammering a message of budgetary restraint. 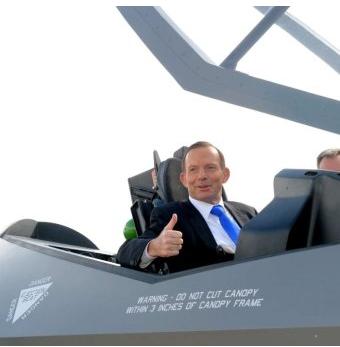 So Hockey’s declaration that the Liberals must take immediate remedial action in the budget and have to address this fast, is alarmism, when at the same time Abbott is unnecessarily committing Australia’s national treasury to a discretionary $12.4 billion spend.

Seems like Abbott and Hockey are playing the ‘good cop, bad cop’ routine.  Abbott has revealed that the Liberals are no better than Labor, and not surprisingly, Labor opposition Leader Bill Shorten has backed the massive purchase.

The goal of Australia’s national budget is to detail a responsible financial plan of revenue and expenditure to underpin economic and social health of Australia citizens and to build Australia’s wealth and resilience.   Responsibly, these are the overriding expectations entrusted by Australian citizens in our national government.

Principles of fairness and offering hope are vital non-economic attributes of a national government budget to ensure social cohesion.

Has this budget delivered to serve or to deny ordinary Australians?