|  I was only just directed to a June 18, 2015 article that appeared on the Facebook page of the Melbourne based ‘Campaign Against Racism And Fascism’. It dealt with the (alleged) appearance of fascism in Australia in the 1930’s.

“Australia has a dark history of fascism, and the 30 thousand-strong fascist militia the New Guard was its most significant manifestation.”

Pictured below is its leader Eric Campbell leading a Nazi salute in 1932 – the very same month a plot was hatched to kidnap the NSW Labor premier Jack Lang and install a fascist dictatorship. 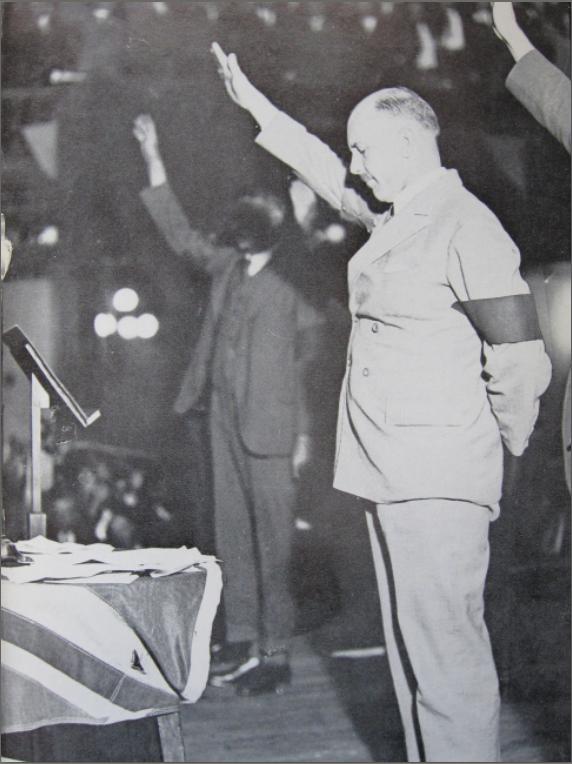 Under the cover of darkness, they intended to form up armed forces in the city, overthrow Parliament and the Constitutional Government, … and set up a dictatorship.  We cannot allow these people the space to organize.

This fascinating article shows the genuine threat fascists have posed in Australia’s history.”

This item then pointed to an article by Matthew Cunningham, “The Revolution That Wasn’t”.

Okay, but Matthew Cunningham also wrote the article I now link to:  https://afaarchive.files.wordpress.com/2012/06/the-new-guard-2012.pdf

Cunningham has also just completed a PhD comparing the paramilitary “Right’ organisations in Australia and New Zealand in that epoch, developing out his article to a full analysis.

Essentially, as the article shows, Cunningham has taken up my argument that the New Guard was not fascist and that the modern nationalists favour Jack Lang and his brand of labour-populist-nationalism which challenged the international banks – over the rightism of the New Guard.

So, what am I on about here?

It would seem that the extreme-left is trying to define what Australian fascism was historically and is then trying to locate it in the present in order to argue for a strategy to defeat it.

Fair enough – from their point of view.  However, a false ideology leads to false politics. If the extreme-left doesn’t even get what fascism was in the past, how can they operate in the present?   And if they really don’t understand the past, might they be open to being manipulated in the present?

According to the extreme-left, fascism is the ultimate ideology and system of the rich class imposed to hold back the socialist revolution inside a vicious regime of police terror and repression. It can also work as a paramilitary bully to crush the Left without creating a regime, or in this case where ‘Islamophobia’ is to be thwarted by the Left – to create a climate against migrants to the advantage of the capitalist system.

If they look at the New Guard, as a model of fascism – and if it was actually fascist – they could have a point.

The New Guard most assuredly set out to stall socialist revolution, but significantly they thought this meant the Lang Labor government which they thought was a more-or-less a front for the Communist Party. Because Lang set out to challenge the bankers and the Empire, he was considered by these conservatives as downright madly evil. Clearly the New Guard was deficient in working out who was a communist.

However in the present, by continuing to call this organisation ‘fascist’, the extreme-left are muddying up the waters. The extreme-left then goes on to position themselves in a fight where fascists are the system toads and they the radicals and just as they beat them before, they will again, ad nauseum. In fighting Islamophobes (sic) they are preparing the ground to overthrow the rich class.

Really?   It creates a narrative of heroic struggle and that’s about it. It also makes them blind.

In all this the extreme-left misses the very close relationship that has always existed between the Australian state and various types of satellite structures and auxiliaries who operate to impose the dominant ideology and politics, back then of ordinary capitalism and today of – well, let’s call it globalism. They do this by persuasion and by force. The state starts these lackeys up (more or less) and shuts them down (more or less). Why should the extreme-left miss it? After all, it just about matches their theory.

The point that I am making is that the question is ideology is the point. The idea that the capitalist state is racist is cuckoo. So these Islamophobes are not part of the state’s offensive against the Left. If the Islamophobes are ‘fascist’ by their analysis, they deceive themselves. If we so-called ‘racists’ are ‘fascist’ in that way, they deceive themselves.

In this connection and by way of example, it is very strange indeed that Andy Hutchings (aka Slackbastard) and other denizens of the extreme-left do not examine the Australian Nazi parties (sic) of the 1960’s and 1970’s. These groups had links with the Special Branch political police and often considered that they were doing the work the ‘soft’ Liberals couldn’t do and that ultimately the Libs would “call them in” (as one Nazi put it) to save Australia from communism. Deluded hey were, but plausible deniability meant that no one would really accept that these groups were state agents.

In this case, the Nazi grouplets were used to terrorise the Left and the Left became motivated to sidetrack themselves into a war with nobodies. Not smart. Now we see the extreme-left mobilizing against all sorts of “far-right”, “neo-nazi”, “Australian nationalist” and other groups to stop hate bursting out of the holding pen and consuming us all in the fires of hell (or Auschwitz). Who does this serve? Is the extreme-left playing the same role as these play-actor Nazis?   This is my real point.

Look at the Cunningham assessment of the New Guard: he says it is tied to the system it would be fighting, if in fact – it was fascist. Hard as it is for the extreme-left to see, fascists in the past were creates of ideology and New Guard conservatism just wasn’t fascist.

Look at the Antifa and the extreme-left of today in Cunningham’s way: it is tied in various ways, open and covert and through the anti racist and anti fascist ideologies and through ‘sympathetic’ politicians and Greens to globalist philosophy. 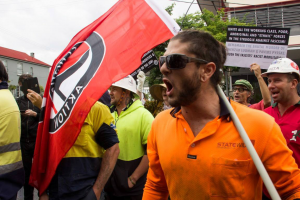 The new globalist capitalism has no real ‘use’ for people espousing nationalism, borders, identity, heritage, protectionism and so on; this capitalism is in a hurry to create a global market place. And so is the extreme-left, except that once all the borders come down and all peoples get thoroughly de-culturated into a pottage, the socialist revolution will supposedly redeem us all. However, before the revolution, the Left must dispose of us. Convenient for those in power, that is – because the extreme-left will waste its energies in fighting us and not their supposed enemy.

Might it not be that by the extreme-left analysis, then they are ‘fascists’ in terms of their function? In other words, the agents of globalist capitalism carry red and black flags and talk of a revolution postponed until they rid of – fascists (read: nationalists and patriots of all types).

In my own academic work, I opted to study the 1930’s Australian paramilitaries to develop a theory about satellite groups engaged in auxiliary action, a concept which may be applied at other times. As a participant in nationalist politics, I have always been keen to ensure that we never be co-opted by the system. And I observed long ago hat it was the extreme-left which sang the song and did the deed for establishment forces. I was not concerned which force of whatever shade of politics did what, but whether it did something in service to the globalising system.

The campaigns against racism and fascism, whatever they call themselves, cannot distinguish historical fascism from conservatism. In the present, they confuse ethnic identity politics with the state, which they believe is always ready to mobilize fascists to defend it.

In truth, they now do for the globalised capitalism of today what the New Guard did for imperial capital in the 1930’s.

The real epitaph of folks like ‘Andy’ Hutchings and the rest of Antifa and the extreme-left might be:

“Tool of the state, not me; ize a revulooshunree!”